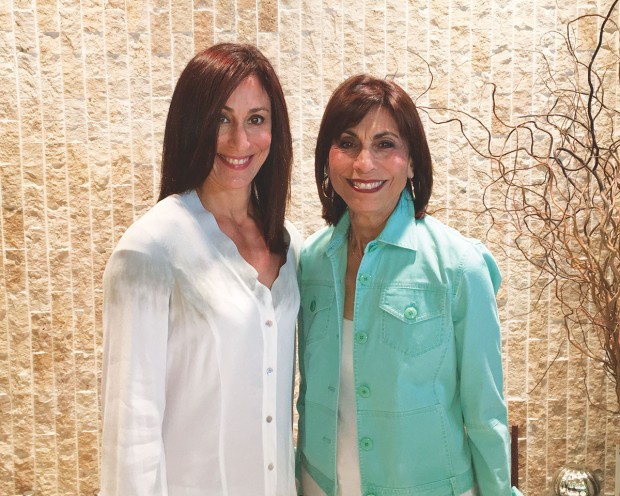 GENERATIONS Elisha Selzer treasures the family-history poems that her mom, Annette Sondock, has written, ensuring that the stories are passed down through the generations.

In honor of Mother’s Day, Buzz resident and guest writer Elisha Selzer shares this tale of a family’s history, kept alive by her mom through poetry.

All families have treasures – keepsakes passed down for generations. My family’s treasure trove includes poetry, pages of history written by my mother, Annette Sondock.

She Lives Now in All of You: A Legacy contains 114 lines of rhyming narrative, unearthing my grandmother Dora Horwitz’s selfless nature, beauty and effervescence while chronicling her life. Emotions associated with Grandma’s dedication to her family and eventual fear of losing independence also surface.

“She was such a force in our lives, such a force where she lived,” Mom says, describing Grandma, who lived independently in Beaumont until she died at 92. “No matter how little time she had, she always had time to give.”

Mom has written 11 poems to capture family personalities and stories, and her personal convictions parallel her descriptions of my grandmother. While raising three children in Houston, Mom worked for McCane Sondock, my father Larry Sondock’s family’s security-system business, and also lead nonprofit organizations like the Jewish women’s organization Hadassah, where she had a 25-year national board post. A soprano with a bachelor of fine arts from The University of Texas, Mom also liked to sing and perform. At Congregation Beth Yeshurun, she taught Bar and Bat Mitzvah students and served as congregation president. At 74, she remains the leader of the High Holiday Contemporary Family service she created 42 years ago.

Self-assuredness causes Mom to appear taller than her 5 feet, 4 inches. Her black hair with bangs, lean figure and trendy clothes belie her actual age. Even in casual conversation, Mom asserts herself as if she has limited time to convey the important things.

“The main thing for me is that the kids don’t think they just ‘are’,” she says, referring to her six grandchildren, Erika and Lindsey Selzer, Joe, Gabe, Lizzie and Sam Sondock, ages 21-10. “They have to know they are connected to people that came before them. I absolutely knew where I came from, but part of that was the unusual way I grew up.”

Mom’s atypical upbringing in Beaumont materializes in her poetry. College Street paints a picture of the multi-generational household in a modest house with no hallways. “We had no privacy. And very limited bathroom time. I learned quickly that seniority has its privileges,” she recalled with a grin.

In The Store, Mom describes Adler’s, the family-owned retail store founded by her grandparents, Lillie and Morris Adler, whose journey from Russia to New York City to Beaumont in the early 1900s is brought to life in Grandma and Grandpa. My grandfather, Joseph Horwitz, whose talents – including poetry writing – are detailed in He Lives Now In All Of You: A Legacy, transformed a saloon with a sawdust floor into a store in downtown Beaumont, with clothes, shoes, army fatigues and more at “thrifty” prices. Adler’s, where seven family members worked together 12 hours a day, six days a week, became a life training ground for Mom and her brother, Kenny Horwitz, now a dentist in Meyerland.

“That’s where we learned to count change, fold clothes, make sales, and look for thieves,” she said.

In Larry and Me, Mom describes a destined introduction to my father in 1960, the beginning of a 50-plus-year journey, including serving a two-year army post in Germany, working in a family business, raising children and focusing now on “what we create as our meaningful legacy.”

Mom gives the poems to us when we gather in her Meyerland home around the customized, 14-foot dining table that enables the entire family to sit together during Friday-night Sabbath dinners. She cooks four courses of traditional Jewish foods such as matzoh ball soup and pot roast, and grandchildren-preferred foods, such as Kosher chicken fingers and guacamole, for her husband, three children and their spouses, six grandchildren, brother, sister-in-law, and niece. Prior to the meal, she signals her grandchildren to lead the family in the blessings.

“Sometimes I don’t want to go because I’m worn out from the week, “ said granddaughter Lizzie, 14, “But when I’m there, I love hanging out with the family.”

“If it weren’t for Shabbat, I wouldn’t be as close with my aunts, uncles and cousins,” said granddaughter, Erika Selzer, 21.

Mom sees the poems as only a snippet of what’s to come. “I want to create a book with the poems, family pictures, recipes and my list of lessons Grandma taught me,” she says, referring to the 119 entries she titled Things My Mother Tried To Teach Me, “things like, ‘If you don’t tell them, how are they going to know?’ and ‘Never Lie. It’s too hard to remember what you said.’”