Pulling off a surprise 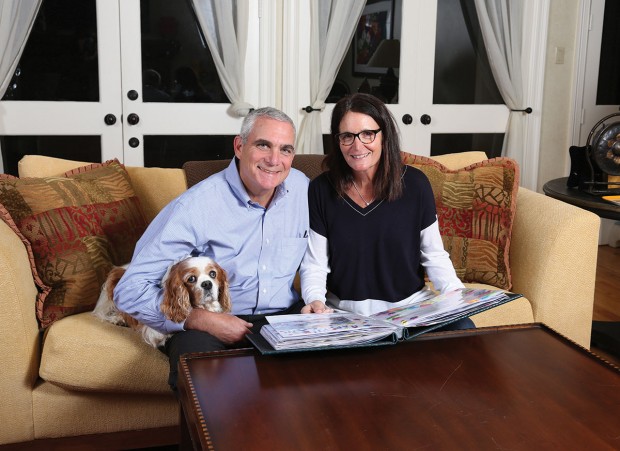 A SURPRISE TO REMEMBER After Ron Oppenheimer’s wife, Liz, surprised him with a 50th birthday party, he later surprised her for her birthday with a scrapbook of memories. (Photo: lawellphoto.com)

I’m not easily surprised. Over the years I have been the guest of honor at a couple of surprise parties, and each time I knew about it in advance. Pulling it off takes planning and scheming and, perhaps most important, a guest list of people who can keep their mouths shut.

On the day of one of my foiled surprise parties, people were acting strangely, and someone actually suggested I change clothes into something nicer before going out. Another time, my husband had no choice but to ruin the surprise because my girlfriends planned my birthday party for the same night I was planning to attend a work function. Both times I played along, and I guess my acting skills are above average because everyone seemed to fall for my shocked and bewildered face, and the parties were great.

Not everyone wants to be surprised, though. One Buzz resident (who insisted she remain anonymous for fear of appearing ungrateful and annoying her friends) says that her surprise 40th birthday party was one of the worst days of her life.

As a self-confessed control freak, she nearly panicked upon entering the party doors. “I know they meant well and spent a lot of time and effort, but I was miserable,” she said. “All I could think was how I would have done things differently if I planned the party. That’s awful of me, isn’t it?” she asked, laughing. “Surprise parties are for outgoing, spontaneous people, and I am neither.”

After the initial shock wore off, she was really touched and honored that her friends cared enough to think of her. Her family and close friends were all there, and some had traveled from out of town to celebrate. It has been several years since the big party, and she finally let go of the fact she would have chosen different food and flowers, and she looks back on it almost fondly. But, she really hopes it never happens again.

Control freaks aside, many people love a good surprise, and when it’s well planned, it will be a party to remember. Energy attorney Ron Oppenheimer was completely caught off guard 10 years ago when his wife, Liz, surprised him with a 50th birthday party. He was in New York City to speak at a professional event, and when it was over he headed to the airport to catch his flight back to Houston.

Ron boarded the plane and made his way back to his seat without paying attention to the other passengers. As he put his carry-on bag in the overhead compartment, someone asked, “Can I help you with that?” Ron looked up, and it was one of his dear friends. Then, another friend a couple of rows back simply said, “Hi, Ron.” He was confused, and while trying to figure out why these people were on his flight, several other friends stood up from their seats to greet him. “At that point they all said, ‘Happy birthday!’ and I figured it out,” Ron said. The flight attendant brought them champagne, and the party weekend began.

Liz was in Houston and waited patiently to see if her planning had paid off. “He had no clue,” she said. The Oppenheimers had recently moved from New York to Houston, and Liz wanted to do something special for Ron, since he was one of the first in their group of friends to turn 50. “Everyone wanted to visit us in Houston, so I figured this was the perfect way to do it,” said Liz.

A limousine took Ron and the New York guests from the airport to the Oppenheimers’ house for a catered dinner of Texas barbecue. The next day, the men went golfing, and the women took a cooking class and then went to a spa. On the second night, Ron and Liz treated everyone to dinner at Americas, which was Ron’s favorite restaurant at the time. The birthday weekend ended with Sunday brunch, and then the New Yorkers headed back east.

The whole weekend was perfect, and Ron was completely shocked. “His friends mean an awful lot to him and to both of us. Ron has known some of them since he was 5 years old,” Liz said. “We are very fortunate to have a long, long list of friends.”

When Liz turned 60, Ron took the opportunity to plan a surprise of his own. The Oppenheimers’ daughters, Jessica and Sara, came up with the idea to create a scrapbook for their mom. They bought scrapbook pages and mailed them with return envelopes to about 60 friends, asking each to create a page for Liz. The pages were filled with pictures, stories, poems and notes that Ron, Jessica and Sara assembled into a scrapbook to give the birthday girl. “The pages were beautiful, creative, hilarious, and some were very touching,” said Ron. “There were so many memories and so much love from all parts of her life.”

When it comes to parties, if throwing a surprise one is on your mind, then plan well in advance and hope that people keep quiet. And if the honoree happens to find out in advance, ask her to practice her surprised face, and no one will ever know – until she writes about it in a magazine.

3:30 pm to 4:30 pm
Location:
The Church of St. John the Divine
END_OF_DOCUMENT_TOKEN_TO_BE_REPLACED