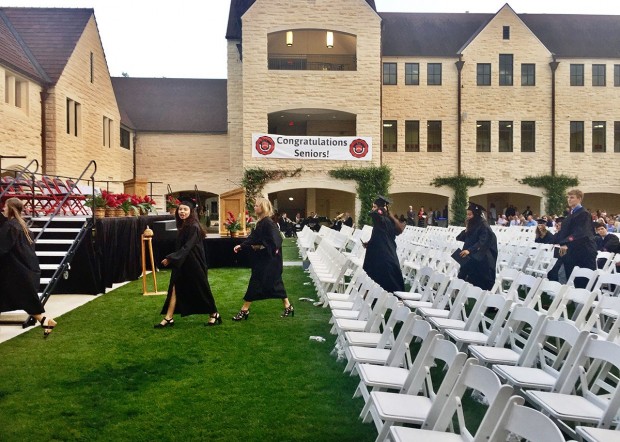 As the Commencement ceremony concludes, seniors file out of the Great Lawn in preparation for the handshake line with faculty members.

On the night of May 16, the grassy lawn of St. John’s School overflowed with seniors, some overjoyed, some tearful, all saying their final goodbye to the school community that had become their second home.

Seniors then enjoyed a dinner with faculty members and were entertained by the annual Parent Skit, a comedic performance acted out by senior parents. The skit traditionally satirizes current events and figures at St. John’s. This year, the parents satirized Senior Tea, a tradition in which parents provide a weekly lunch for the seniors, among other subjects. 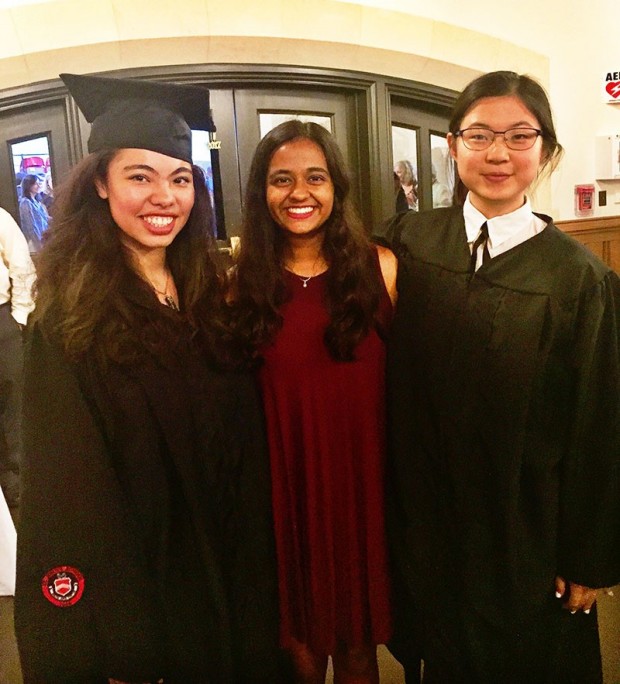 Senior parents also had their fun by creating an irreverent music video to Bruno Mars’ hit song, “24K Magic,” which was shared with the senior class. The video featured revised lyrics about the graduates, parents dressed in St. John’s uniforms, drone photography, a cameo of a private jet, and lines of parents forming the shape of “2017” on the football field.

On May 15, seniors gathered in St. John the Divine Church for the Baccalaureate ceremony, a spiritual service which includes a sermon and acts as a farewell address to the graduating class.

“I got super emotional being in the St. John the Divine church for the last time as a student,” senior Grace Amandes said. “It was so nice being able to celebrate with my classmates.”

This year’s Baccalaureate ceremony featured speeches from Head Prefect Cam Cook and from English teacher Clay Guinn, who was chosen by the senior class to speak. Seniors in the audience appreciated Cook’s efforts to give plenty of “shout-outs” to his classmates and make everyone feel included in the celebration. The ceremony also featured a performance by Kantorei, the top Upper School Chamber choir.

The final hurrah was the graduation ceremony, Commencement, which was held on the Great Lawn in order to seat the maximum number of people.

“It was a beautiful service, and the weather was really nice,” junior Audrey Ledbetter said. “My favorite part was when all of the seniors were walking to the stage, and it was fun to see all of the faculty.” 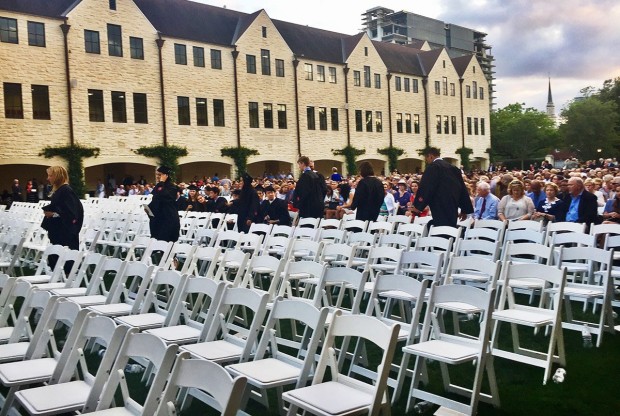 Graduates’ family members wait for the handshake line to conclude and for the post-Commencement reception to begin.

Many attendees appreciated the cooler climate, as graduation has been held in warmer weather in the past.

“The wind made it hard to hear the microphone, but I liked how it was outside and later at night,” senior Alara Burgess said. “It was really pretty to see all of us together, even though we forgot to throw our caps up in the air.”

This year’s Commencement speaker was Will Giraud '98, who currently serves as the Executive Vice President, Chief Commercial Officer and Corporate Secretary of Concho Resources, Inc., an oil and natural gas company. Giraud is a graduate of Wake Forest University and the University of Texas.

Giraud asserted that graduates would likely face challenges in their new schools, when creating new communities and living in new places. However, Giraud emphasized St. John’s ability to prepare students for college and urged seniors to rise to the occasion without being afraid of risk.

“His speech was short and to the point, and his most important message was to “go get out there” and to be adventurous,” senior August Schwanauer said.

After the ceremony, many seniors enjoyed the handshake line, a longtime tradition where students shake their teachers’ hands in gratitude and as a final farewell. Teachers from Lower, Middle and Upper School were present, allowing longtime St. John’s students to reflect upon their time in all three school divisions.

“The handshake line was really nice,” Burgess said. “I’ve been at St. John’s since Lower School, so it was great to see all of the teachers that have helped me graduate.”