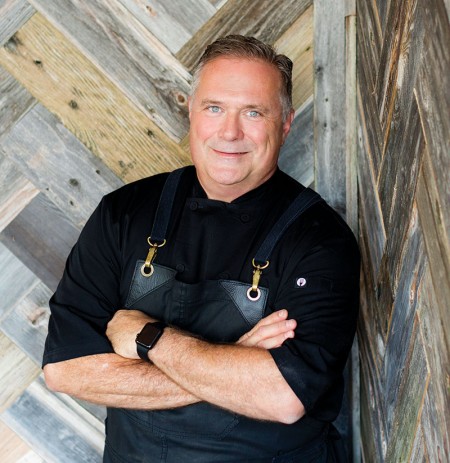 In the world of salads, Jim Mills’ signature Southwest Caesar is star.

Bejeweled with roasted corn, black beans and pumpkin seeds, the zippy Caesar – splashed with a spunky dressing fueled with Thai chilies, coriander and cumin – has made countless appearances on Houston menus. It doesn’t matter whether Mills is in the kitchen or even officially associated with that restaurant – his award-winning creation has garnered countless fans, and his protégés, now with restaurants of their own, have chosen to pay their mentor a compliment. As Oscar Wilde once said, “Imitation is the sincerest form of flattery.”

Later this year, Cherry Pie will open another Star Fish in Menlo Park in the San Francisco Bay area and a second State Fare in the Downtown Commons retail area in Sacramento.

Below, Mills reminiscences about how he dropped out of college and developed a passion for food, and he also recommends a few mom-and-pop restaurants that he and his wife like to frequent on rare nights off:

What to order at Lee’s Fried Chicken & Donuts is a no-brainer. Same with Pi Pizza and Petite Sweets, where folks can pair cupcakes with Lee’s Creamery ice creams. But tell us about State Fare and Starfish.

I spent a year working on many of the recipes at State Fare. Many are family recipes. Lee was born in Lafayette, Louisiana. I grew up in Texas, so the cooking is from around here as we see it.

While the food is approachable, we wanted to take it to an executive level. Take our chili. People will say, “I can get chili all along the Katy Freeway.” But you can’t get my chili. It’s made with no tomato and no bean. We use shoulder of the beef, which we clean like we’re making steak tartare, so there is no fat. We take care to brown our meat, and we don’t use chili powder. I make an ancho and pasilla paste with caramelized garlic and onions. We thicken the chili with masa, and I finish it with a few drops of apple cider vinegar to cut back on the salt. That’s the recipe. Some people don’t like it, but most people love it alone or on our chili fries, chili cheeseburger, and Frito pie. It’s like gumbo; every cook has an opinion. But this is my version, and I’ve been researching chili recipes since the ’90s.

Speaking of gumbo, do you have one, and what are other family recipes on the menu?

We make a Sabine Pass gumbo, and like many folks in Beaumont, we put in chicken and seafood. Ray’s fried catfish is my dad’s recipe. We get our catfish from a farm in Mississippi. The ponds are lined with stones, not mud, so you don’t get that muddy taste.

Your Southwest Caesar Salad is on the State Fare menu, and you described your smoked pork chops as “to die for,” but what about at Star Fish? What should we try there?

Anytime you do seafood, it has to be seasonal, and even though we call it seafood-centric, it’s not exclusively seafood. We have grilled lamb, steak frites and fried chicken breast.

We came across an old Texas Monthly article on Southwestern cuisine founding father Dean Fearing. It highlighted an onion pudding recipe “based on a family recipe from Jim Mills, the chef de cuisine at the Mansion” on Turtle Creek. How did you get into the business?

I started as a dishwasher while in college in Austin; then I got a job as a prep cook. When I was 21 years old, my chef mentor decided to go to Europe. He asked if I wanted to tag along. I thought I would just re-enroll later, but my heart wasn’t in it. I was more interested in cookbooks than schoolbooks. So, we traveled across Europe until I ran out of money.

You and your family live in Spring Branch. What are some favorite places to eat at near home?

I like Bon Ga Korean Restaurant (9861 Long Point Road) for its tofu soup, or we’ll splurge and get the sautéed squid. We like Korean House (10078 Long Point Road) for barbecue, and we love Roostar Vietnamese Grill (1411 Gessner Road). It’s an awesome banh mi place. I think they just opened another location near the Galleria (5551 Richmond).