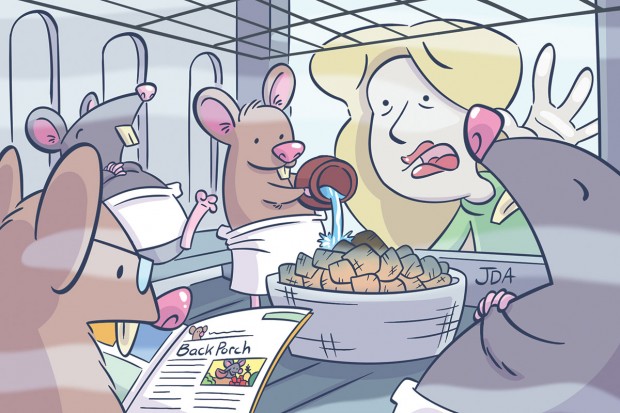 OH, RATS! Critters are ubiquitous in Houston. We just don't like to talk about it when they set up camp inside our homes. (Or ovens.) (Illustration: behance.net/runamokstudios)

In life, there are Facebook opportunities everyone wants to share. Proud parent moments. Reunions with friends. Beautiful family pictures. Even sad times.

Then there’s the stuff that’s neither shared nor hidden. It just is.

Then there’s the unspeakable.

I found this out on Mother’s Day, when we realized one of the beds in our house had –I cannot believe I am writing this – bed bugs. Just typing the words screws my face up and sends me gagging. Let me say this was a minor case, and we immediately had the whole house professionally treated after literally washing and dry cleaning everything in sight and vacuuming, in a frenzy, every crevice in the house. We’re clean, clean, clean (as I cross my fingers, two months later).

But back to the subject. The next day, as I was in what I can only describe as full panic mode, my mom asked her friends at lunch if anyone had ever had bed bugs. One woman, Mom told me, silently looked down, screwed up her face and shook her head. Yes, she had them about two years ago. But she had never told a soul.

Well, thank goodness she fessed up, because her advice was gold, and I could finally breathe knowing someone else had lived through this plague.

Which got me thinking: What other atrocities are people dealing with but decline to share?

I started asking around. I found out there’s a whole lot going on out there that we never hear about. Like the young couple who’s just moved into a new house, “a very expensive house, not a fixer-upper,” says the wife. They have a newborn baby. And rats.

“The story is so disgusting,” she says. “First, we found an apple sitting on the kitchen island that looked eaten. Then, we noticed droppings, and I looked it up and was like, ‘Oh, that’s definitely a rat.’

“So we had the exterminator come out. He put out poison, so we were like, ‘This is taken care of.’

“A couple weeks later I turned on the oven and was like, ‘What’s this smell?’ It was really weird, so we cleaned the oven but didn’t think anything. But the next time we used the oven, we made the connection that the smell was the rats. We pulled out the oven, and there were droppings all over where they were coming in through a tiny hole in the connection and pooping and peeing in the oven. I can’t even. I was like, ‘There goes the oven.’

“That’s when I freaked out. I don’t scare easily. We’ve had roaches. But this was just too much. Have you ever heard of the movie El Norte that everyone watched in Spanish class? About this brother and sister and they get stuck in a drainpipe and they get attacked by rats and the sister dies? I’m telling my husband this is El Norte!”

The couple says they’re controlling the problem with poison and will be for a long time. Also, she says, “We’ve just ordered a new oven.”

Another family in a beautiful home has moths. All over. “My child did a semester abroad, so his stuff got stored in the basement of the dorm,” the wife says. “Boxes came home for the summer and got thrown in the closet. Maybe a month later we started noticing tiny moths flying around. I went into the closet and saw these little cocoons hanging from the ceiling, and when I started looking with a keen eye, there were hundreds of them. Then I went into the bedroom and saw, in the corner of the room, all these cocoons that had hatched. It had obviously been going on for a long time.

“I called the exterminator, who said, ‘You have to send all the clothes and every rug to the dry cleaners and rip out every wool rug, all at the same time. Then we’ll set off a bug bomb, then you’re good to go.’ I was like, ‘That is never going to happen.’ I’d rather crawl around looking for cocoons and vacuum like crazy and spray some bug spray.”

And that’s what this homeowner is still doing, some two years later. “Sometimes I wake up in the middle of the night and think, ‘They’re going to eat all my Oriental rugs. Because inevitably it’s your most favorite fabulous sweater they get to. They only eat cashmere, not the dumb wool socks. But if you’re diligent, they’re manageable.”

And by the way, did I mention that my house is very clean?