History is Not Boring or Did I Mention There are Beheadings? 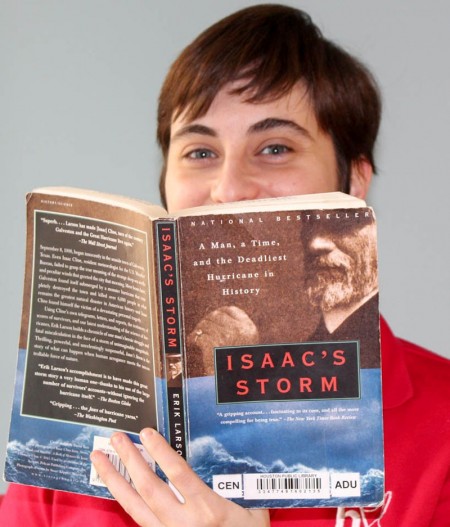 Savannah Dorsett recommends historical books that are full of action and intrigue, such as Isaac's Storm by Erik Larson, which details the events before, during and after the deadly 1900 Galveston hurricane.

As a proud History major in college (double majors in History and Classics with minors in Political Science and Religious Studies, which means I was doomed - I mean destined - to work in a library), it’s always baffling to me when someone dismisses history as not that interesting. It’s my belief that these poor unfortunate souls just haven’t found the right books to grab hold of their imagination and make the topic come alive. As a proud history geek, I consider it my duty to remedy that. Here are a few titles that might just do the trick. They’re as exciting as any binge-worthy television show or blockbuster movie. And it’s all true!

The Six Wives of Henry the Eighth by Alison Weir: Palace intrigue, love affairs, accusations of witchcraft and incest, betrayal, factions, a power-mad lustful king and so very many beheadings. How can people say history is boring when it reads like an episode of Game of Thrones? Weir makes each woman a rich three-dimensional person, I guarantee you’ll walk away from this book with not only a new appreciation for Tudor history but at least one favorite queen. I myself am Team Katherine Parr. Want to know why? Read the book!

Lafayette in the Somewhat United States by Sarah Vowell: If you love the musical Hamilton and want to know more about America’s favorite fighting Frenchman Lafayette - full name Marie-Joseph Paul Yves Roch Gilbert du Motier, Marquis de Lafayette - this is the book for you. Vowell’s work, like all her other titles, is a perfect blend of nerdy, funny and strangely patriotic as her love of America, warts and all, is evident in every page. She doesn’t shy away from documenting all the petty bickering and backbiting that went into our war for independence, which makes it even more remarkable that this group of scrappy underdogs managed to pull it off.

The Guns of August by Barbara Tuchman: For fans of the new Wonder Woman movie who want to know more about why this was such a cataclysmic event it would even draw the attention of the gods. Focusing on the build up to and the first early months of World War I - or as it was known then, the Great War or the War to End All Wars (sadly not the case), The Guns of August is part political thriller, part war film and with a dash of horror movie thrown in as readers are left to helplessly witness everyone involved do the exactly wrong thing at every turn which sets the stage for four years of slaughter.

Isaac’s Storm by Erik Larson: You know that disaster movie cliché where all the warning signs of impending doom are ignored to everyone’s peril? This true story might be where cliché was born. Detailing the events before, during and after the deadly 1900 Galveston hurricane, Larson tells the story of meteorologist Isaac Cline who, after initially dismissing the possibility of a storm hitting the island, realized the danger only too late. Despite efforts to warn the public, between 6,000 and 12,000 people were killed. This remains one of the deadliest natural disasters in U.S. history. (Read more on Isaac's Storm and other storm-related books in this post by Mary Cohrs.)

The 12 Caesars by the Roman historian Suetonius. Originally composed in AD 121 (so perhaps not for beginners) this is a collection of biographies of Julius Caesar and the 11 Roman emperors who followed him (taking in his memory the title of Caesar.) Said emperors were a mix of the good, bad and the ugly (also the corrupt, inept and just plain crazy) and Suetonius is not afraid to dish all the dirt. The chapter on Caligula alone - who married his sister, insisted he was a god and demanded others worship him as such and threatened to make his horse a senator, is Exhibit A through Z on why sometimes history is more outrageous than any fiction.

Still not sure history is for you? Ask your friendly librarian for more title suggestions!