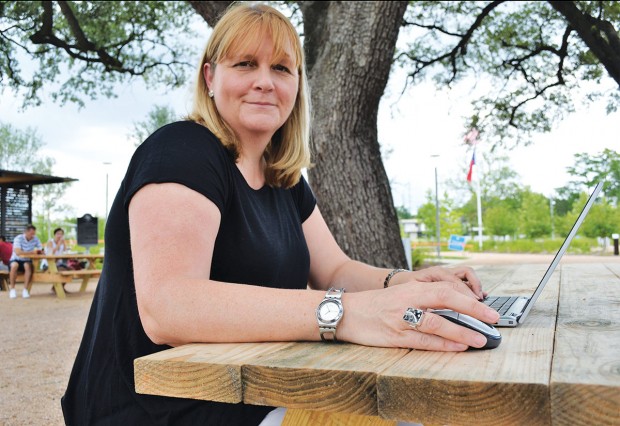 WHAT TO WRITE When Houston’s weather is pleasant, Caroline Leech often sits outside to craft her characters and story lines. Here, she is in Evelyn’s Park. (Photo: Rory Leech)

In a new series, we profile Buzz-area authors.

Caroline Leech quit her public-relations position at the Welsh National Opera, moved with her family overseas to Houston and decided to become a novelist.

She had never written fiction before. She had always been captivated, however, by her parents’ tales of their experiences in Scotland and England during World War II. In Texas, she didn’t have a visa, but needed to work. She also wanted a flexible job that would allow her to take care of her three kids, Jemma, now 20, and her 16-year-old twins, Rory and Kirsty. Jemma has cerebral palsy and lives at home.

Leech’s husband, Perryn Leech, had accepted a job as the Houston Grand Opera’s technical and production manager, prompting the move. Leech is now HGO’s managing director. “We decided moving to Texas would be an adventure,” she said. “I had the chance to reinvent myself.”

That was 10 years ago. This spring, Leech’s first young-adult novel, Wait for Me, was published by Harper Collins. She’s currently finishing edits on her second manuscript and is pitching ideas to her editor for a third book.

Wait For Me is a historical romance that tells the tale of Lorna Anderson, a farm girl in Scotland in 1945 whose life is turned upside down when a German prisoner of war is assigned to her family’s farm as a workhand.

The work of fiction draws from Leech’s family stories. Her mother was evacuated from London at age 8 the day after the war broke out. Her father, from Edinburgh, joined the war in 1944 when he turned 18 and served in India, Burma, Java and Palestine. Her parents told her stories of rationing food, blackouts and listening to the BBC on the wireless.

“It’s about a pocket of domestic life away from the battlefront,” said Leech, a self-professed want-to-be opera singer who grew up in Edinburgh. “I’m Scottish, but the book is very much a Texas baby. Houston is so open to the arts, welcoming and supportive. We love it here.”

Once in Houston, she signed up for an online course in writing children’s literature with the Institute of Children’s Literature in Connecticut. She picked up a copy of the young-adult vampire-romance book Twilight and read an interview with author Stephenie Meyer. “She would write at the pool while her son took swimming lessons,” Leech said. “I suddenly thought, yes, I can do this.”

By the end of the course Leech had completed a draft of a novel. And while that manuscript—about a mermaid legend in northern Scotland—still sits tucked in a drawer, it wasn’t long before she set to work on Wait for Me.

Leech knew she needed a deadline to complete Wait for Me, so signed up for National Novel Writing Month, known as NANO, a global event that unites writers in completing a novel in one month. She found a writing partner, and spent two to three days a week writing in her local Starbucks; home offered too many distractions.

She started by scribbling an outline and details about her characters’ lives in pencil in dozens of spiral notebooks. To write, she needed a cup of Earl Grey tea on hand. Leech enjoys reading dialogue-heavy books, and mimicked that style for her novel. Google Maps helped her paint a picture of the town in which her story is set until she later traveled there herself.

She eventually submitted 20 pages of her manuscript to two Romance Writers of America contests – the Lone Star Contest and The Emily Contest – both run by Houston RWA chapters, and won the YA category in both. Her soon-to-be editor was a judge. “She ended up asking for the whole manuscript,” Leech said. “And two weeks after she read it, I had the deal.”

What followed were months of excruciating edits. Her original manuscript was 180,000 words; her editor told her to cut it to 80,000. Leech has found her novel not only appeals to teens, but also to older adults, both men and women. Several older women who remember the war years have contacted her after reading the book, she says, to thank her for triggering fond memories from their childhood.

Leech’s second book is also set during World War II, but in the Scottish Highlands. In that one, Maisie is a 17-year-old girl who leaves home to join the Women’s Timber Corps, a British organization that put women to work as “lumberjills,” providing wood from the forests to support the war effort. The novel is set to be released in the spring of 2018.