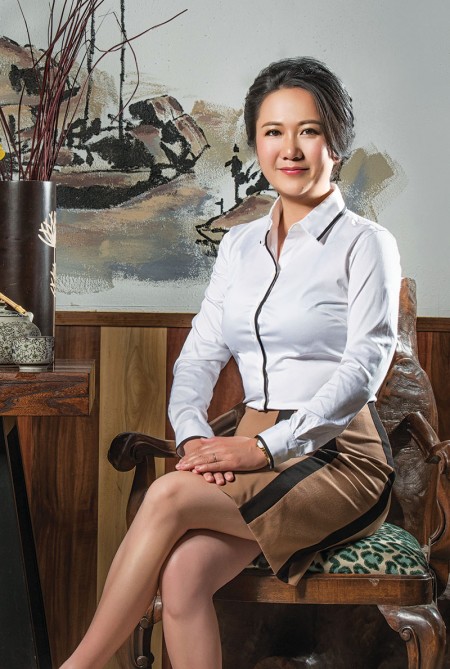 When we caught up with Pepper Twins chef-owner Yunan Yang, she was rushing out the door to pick up friends who had been flooded from their Pearland homes. "They need to get to the Medical Center," she explained over the phone.

A week after Hurricane Harvey, she had six people living in her home. "They're leaving today, but we have five more coming to stay with us. So many people need help right now," said the 37-year-old Sichuan native.

Helping folks isn't new. Yang was a doctor in China's populous Sichuan province and then, later, a breast-cancer researcher in Madison, Wisconsin.  But in 2015, she abandoned a distinctive medical career to open Cooking Girl, a bustling Sichuan restaurant in Montrose recently rechristened Pepper Twins.

How did you end up in Houston?

When I was 20 years old and a medical student, my cousin took me to meet this blind person. This person told me how I would meet my husband and, too, that I would have two children – a girl and a boy. And I have a girl and a boy. Also, this person said that I would finish my studies abroad, but that I needed to go north for my studies. But for my business, I needed to go south.

So, I got out a map and saw that Houston was south of Madison. I didn't know anyone here or anything about Houston. I remembered that when I got here, I saw an ad for the Fairview location and, then, signing the lease,  I didn't even know it was located in the Montrose area. I remember asking people later – after we opened Cooking Girl – what is this Montrose? I went by faith. In China, we have this belief that your heart will give you directions.

Why did you stop practicing medicine?

I was a radiologist, researching  cancer. I got very ill from being exposed to radiation and almost lost my life and my second child. That's when I decided to change careers and to open a restaurant. I wanted to introduce authentic Sichuan.

At the time, it was hard to find good, authentic Sichuan. Now in large cities, like Houston, there are places. But for the most part, people don't focus on quality, or the flavors are too strong, too oily, or too spicy. We use the best ingredients possible, and the Sichuan peppercorns are flown in from my hometown in the mountains. Every branch has nine leaves, so I call it nine-leaf peppercorn.

There is still one Cooking Girl in Sugar Land. My sister runs that one, and I am 50 percent owner. But my focus is Pepper Twins. My goal is to have 200 locations. Right now, we have five locations. We opened a third one at 3915 Kirby and a fourth in Katy. In October, we opened Pepper Twins Mini in Pearland. Pepper Twins Mini is a new concept, about half the size and with a limited menu. It's very fast, very express. Next year, I hope to roll out more Pepper Twins.

For people unfamiliar with Sichuan and the lemony, tingly overtones of Sichuan peppercorns, what do you recommend they try on their first visit?

Mr. & Mrs. Smith. It's a wonderful dish that takes us two days to make. I didn't think Americans would order it if I called it beef tongue and beef tendons in red oil, so I came up with Mr. & Mrs. Smith because they’re a nice combination, yet they're very feisty. It's one of our best sellers now. I like to pair it with our garlic cucumber made with Persian cucumbers, red oil and garlic.

In China, we would have those two things with a cold beer, and that's enough. But for a third dish, you might try the ginger fish or the mustard tofu.

When you’re not working, where do you go for Chinese and other foods?

On Mondays when we're closed, I sometimes go to Mala Sichuan (9348 Bellaire) in Chinatown. I love the brunch at Yauatcha (5045 Westheimer) for dim sum. The flavor at Yauatcha is light, not heavy or too oily. Steak is my favorite food. There are a couple of Brazilian steakhouses along Westheimer I like. But for American steak, I love Taste of Texas (10505 Katy Freeway).