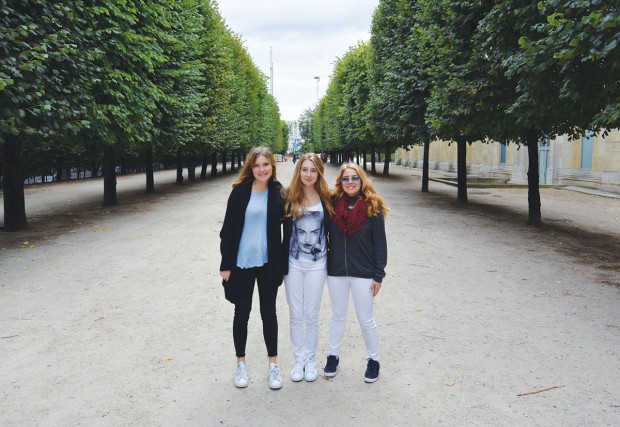 TAKING IN THE TUILERIES Jacquelyn, Nicole and Isabel Kramer explore one of Paris’s historical landmarks, the Tuileries Garden near the Louvre.

This is the third in a three-part series on families who take their kids on an extended study-abroad program. In August we visited with the Germains, and in September, with the Waters. Both families traveled around the world. The Kramers’ approach was to move to Paris for a year – which has now turned into a planned three.

Ilene Kramer came home one day and found husband Don cooking up an idea. Don, a retired anesthesiologist and health-industry businessman, was looking into a new project. “What do you think if we buy an apartment in Paris?” he asked her. She liked the idea.  And, he said, “Can you be at the airport in two hours?’

Indeed she could, and the next thing she knew she was touring Paris under the guidance of a real estate agent. After three days, they found the perfect apartment, just a 10-minute walk from the Eiffel Tower.  The idea began as an investment, and it turned into an adventure.

The family had begun dividing their time between Houston and Telluride in 2014 and became acquainted with a whole community of families who travel – not as a vacation, but as a way of life.

The Kramer family had been involved in organizations hosting international students and travelers for years, and more recently, Don had served as consul for the Republic of Botswana to the United States. “The idea that our family would have cultural experiences was always important to us – and that’s part of who we are,” he said. Hence the idea of a year abroad.

They proposed the idea to their teen girls – triplets Isabel, Jacquelyn and Nicole, who were at The Emery/Weiner School at the time – and they loved it. So two days before they would have gotten their driver’s licenses on their 16th birthday, on Aug. 12, 2016 (“a strategic move,” their father joked), they landed on Parisian soil and began their new life. They invited cousin Madison, also 16, to come spend the year with them. Now a year has turned into a planned three, with the exception of Madison, who returned home to her family in New York in June.

They all enrolled in the American School of Paris for 10th grade, and the transition was fairly seamless, with the school a key ally in orienting themselves to their new city. They found the school to be highly diverse, with only 30 percent of the students from the U.S.  Another 30 percent are French, and the rest are from other countries.

“You really hear so many different languages spoken at my school as you’re walking down the hall – it’s amazing,” said Jacquelyn, who goes by Jackie. She has classmates from Korea, Brazil, Egypt and Spain, just to name a few.

For Don, it’s been gratifying to discover a kinder Paris than the one he visited as a sightseer.

“One surprise is discovering that Paris is a friendlier city than I knew as a tourist,” he said. The city is very international, he explained, with many English speakers who can step in and explain when necessary – and with six years of French in school, he and Ilene can get around pretty well. “Nowadays if you don’t speak French you can get by.”

A big surprise has been the level of freedom that teens in Paris enjoy compared to their U.S. counterparts, said Nicole. Public transport makes mobility easy, and Uber is everywhere.

“I feel more independent here,” said Jackie. “I’ve always lived in a city where I had to ask my parents to drive me around. Now I’m walking or taking the bus.... I just walk to my friend’s house, the neighborhood café, the museum…. being in a walking city rather than a driving city makes a big difference.” 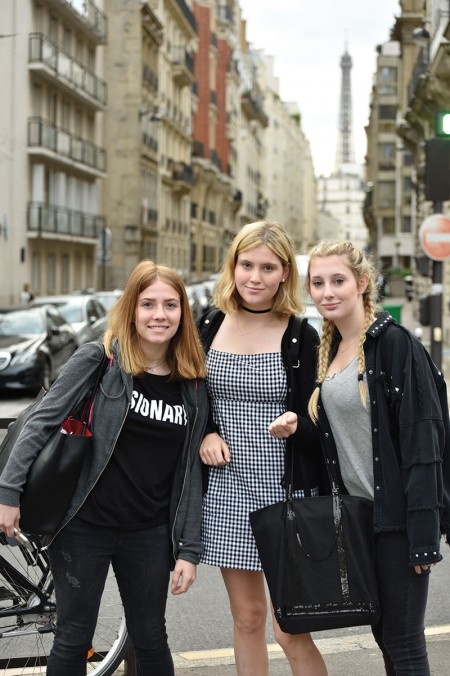 A L’ECOLE! The Kramer triplets – Jacquelyn, Nicole and Isabel – are on their way to catch their school bus. The Eiffel Tower stands in the background.

At first they were shocked by the cultural differences. For one, a much higher proportion of teens in France smoke cigarettes, as many as 44 percent, according to Ilene.

“In America it’s so taboo; it’s unheard of for kids to smoke,” said Madison. “Here, it’s just a part of their culture.”

Another surprise, said Nicole, was the vibrant nightlife among teens; it’s common for high schoolers to go “clubbing,” she said.

This was more challenging for the parents than for their girls.

“When I came here my kids told me that their friends go out at 11 or midnight, which is when I would normally have them come in; here it’s common for high school students to come home around 2:30,” said Don. “It took me a little while to understand there are cultural differences in how people live their lives, particularly the kids, and I needed to let go.”

The family developed several strategies to help them adapt to this reality, operating on a philosophy of “trust but verify,” in Don’s words. They negotiated curfews; they learned to track their location on their iPhones.

Most importantly, said Don, “we got to know the parents of the girls’ friends and with that has come an understanding and a certain comfort level. We know the kids with whom ours are associating and where they are.”

Other aspects of the Parisian lifestyle are enchanting: the outdoor cafés, the gardens, the architecture, the museums and the outdoor concerts, the people-watching.

“Paris is so beautiful; every time you walk down the street there’s so much to see,” said Ilene. “With all the hidden parks, people are out picnicking… people who live in Paris don’t often have their own backyards or green space, so those parks become more important.”

The markets, stocked with a wide variety of fresh produce and prepared gourmet treats, make something as mundane as grocery shopping a culinary adventure.

The café culture is everywhere. “The outdoor cafes are always full of people; even in the winter people are sitting under heat lamps just to be outside,” she said. “People go out at 5 p.m. after work, and everyone is having glass of wine or a cup of tea or coffee, and sitting outside with a friend.”

Of course Paris has its serious side as well, and particularly now, with political tensions, the refugee crisis and the very real threat of terrorism. Living in Europe has opened their eyes to the world in a way that Houston never did.

“You really realize that you are a global citizen,” Ilene said. “The world feels very small, and you begin to realize that you can’t really separate yourself from others, but you really are a part of everyone.”

The problem of homelessness has been a disturbing one, said Don, with tent camps under bridges and around the city. Encountering people with their children begging in the streets is not unusual.

During their first semester, Isabel said, the influx of refugees reached a peak. The problem is a longstanding one, but it has been exacerbated by the refugee crisis. Many times only one family member – the father, the eldest son, or perhaps both parents – will come alone because of the difficulty and danger in the journey north.

The asylum process takes a year and a half. Usually they are able to get a work permit during that time, but they send most of the money back home, leaving them without enough to cover their own expenses, and many live in the tent camps.

“I’m very open to letting refugees in because things are very bad back in Syria,” said Jackie, “but they need to have a better system.”

The refugee crisis was a central issue in the French presidential campaign, which the family followed with interest. President Emmanuel Macron beat right-wing, anti-immigrant candidate Marine Le Pen in a fiercely contested battle.

The election of Macron has given France a sense of youthful optimism, said Don. “He’s 39 years old; he’s their John Kennedy.”

Macron’s advocacy of global citizenship – like Europe itself, which has an extremely interdependent nature – stands as a sharp contrast from the politics and policies of the current U.S. administration, Don said.

For Ilene, attending the Women’s March held a few blocks from their home in conjunction with marches around the world following Donald Trump’s inauguration was “very, very exciting…. It was all about women having a voice, and especially having daughters, being at the Women’s March was very moving.”

Overall, the girls agreed, the experience has been one they would recommend to their peers back home, despite the initial homesickness and fears of not fitting in.

“At first it’s a little difficult and you might want to go back,” said Isabel. “I struggled with leaving my friends behind, but then I was making new friends. It was very difficult at that point and it took awhile. But you’ll get over it… and you’ll learn so much more that you wouldn’t have learned living in Houston your whole life.”