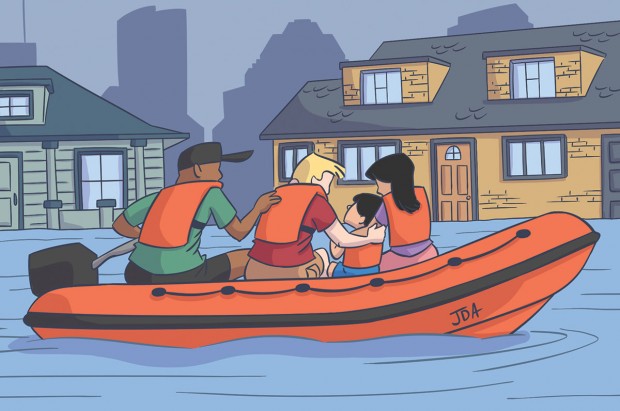 ALL TOGETHER No matter their differences, Houstonians came together to help each other during and after Hurricane Harvey. (Illustration: behance.net/runamokstudios)

There’s been so much talk lately that defines us all on our surfaces. Black or white. Conservative or liberal. Gay or straight. Muslim, Christian, Jewish. It’s the kind of talk that, truly, I have never heard in my lifetime. Things being said and judgments being made that I read about in history books but didn’t believe still existed except maybe in some small corners of our world that I wasn’t too terribly worried about.

And then things started happening around our country: rallies, protests, discussions that weren’t discussions, but people shouting so loudly they couldn’t hear – much less understand – what their neighbors also were shouting. Questions about freedom of speech and history and statues, and about whether what’s legal also has to be moral. And what is moral, anyway?

But then, in a matter of days, through my own very large corner of the world, came the undoing of all that. That undoing was Hurricane Harvey.

A natural disaster like none most of us had seen, Harvey took his time moseying through southeast Texas, flooding homes, destroying memories, rearranging lives, unapologetically leaving what felt like chaos and catastrophe in his wake.

In the midst of that chaos, though, something even bigger happened in Houston.

Everyone became human again, at a very base level.  People needed each other – not just an extra penny at the cash register or a hand with the gas pump. But we needed help evacuating homes filling with water, sometimes off of roofs when the water had already risen too high, carrying pets and children and backpacks through that water, and then figuring out what to do next. We needed drinking water. And it didn’t matter whether we lived in a run-down rental or a River Oaks Georgian. None of it mattered: not the color of our skin, not our political leanings, not our sexuality, not our religion.

Indiscriminately, Houstonians who could jumped in boats. Lawyers, bar owners, real estate investors, people who drove here from three hours away wanting to lend a hand. Neighborhoods that no longer resembled streets as much as rivers became meeting grounds for residents in the most diverse city in the country. As one Houstonian put it, “Everyone looks the same when they’re getting rescued by a boat.”

In the days that ensued, those rivers turned to aisles of debris – sheetrock, carpet, sofas, washing machines. And still we turned out. Teenagers, adults, anyone who was able helped as best we could. Neighbors moved from house to house tearing out wet gunk from homes of people we’d never met. People pulled coolers filled with drinks and snacks, offering them to strangers. Families cleaned out closets of extra food, clothing, toys and art supplies to occupy the newly homeless in the giant shelters at NRG Stadium and Toyota Center and every Gallery Furniture store in town. Or we bought new supplies and delivered them to donation points, or directly to homeowners cleaning out wetness, whether we knew them or not.

When we realized the need, we jumped so far in that lines to donate all these necessities wrapped round multiple city blocks. Volunteers – and donations – were actually being turned away. Because the need was great, but the heart of Houston was that much greater.

So now what? As of this writing, we’re still fresh, still digging in and making small progresses. We haven’t started the rebuilding process that is bound to take months for some, years for others. But something big has changed. Or maybe it hasn’t changed. Maybe it was there all along but just got buried under all the definitions and all the political squawking.

Here’s what it is: We’re stopping to talk to each other. We’re taking time to ask, “How is your family? How are you?” Sometimes, the answers aren’t great. Someone has lost everything. Someone is physically and emotionally exhausted. But more often, the answer sounds something like, “I’m lucky, we only lost one car,” or, “We just had a couple of inches, nothing as bad as so many,” or, “Everyone is safe, that’s what counts.”

We’ve all realized what precarious foundations we live on. Things change in the blink of an eye, life is short, materials don’t matter – all truths. Truths Harvey showed us all firsthand. And in the midst of all that truth-telling, Hurricane Harvey showed us that when we need help, and when we help, we are all the same. No definitions, no second thoughts. We just get the job done, in this town full of heart.