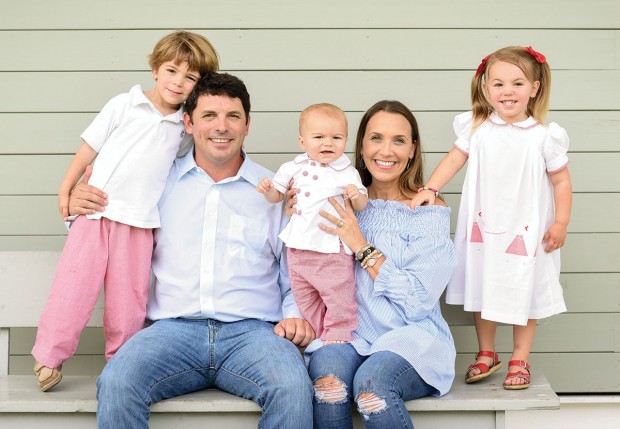 Wesley ​and Chris ​Gibson ​say ​they take turns on who gets to nap and who watches children Charlie, Wyatt and Lucy​.

A few years ago, a friend of mine made an appointment with an endocrinologist.

“I was having trouble focusing,” she explained to me later over lunch. “I thought there was something really wrong me.”

Julie (not her real name) couldn’t find a babysitter, so she brought along her then-6-month-old baby and 2-year-old toddler to the doctor.

The appointment was not peaceful. “Don’t pick that up.” “John, sit down.” “John, do you want to watch Mickey?” The baby grabbed at anything he could reach, and the toddler tried to destroy the doctor’s office.

The nurse asked routine questions. As Julie was describing her symptoms, she says, “I am seeing double, and when I turn my head, the room is spinning for a second.” The nurse took notes. Julie, worried about her impending medical report, wrangled her children.

As the doctor walked in, he took one look at her and the two children and said, “Well, I can tell you what the problem is.”

“I knew you were going to say that,” Julie replied.

“It wasn’t fair,” she told me later. “Just because I had two kids with me, he assumed that that was the reason I was having issues.”

But sure enough, the doc was right. Her blood-test results came in. She was perfectly healthy. The doctor’s diagnosis? She was chronically tired.

Parenthood can be mentally, physically and emotionally challenging. Sleep deprivation during the baby years can lead to moodiness, memory problems, even hallucinations and paranoia.

While I know those are serious health concerns, it’s also true that sleep deprivation can lead to some pretty humorous situations.

Recently, I polled some Buzz parents and heard stories from rocking the cat to sleep and crying – literally – over spilled milk in the kitchen to multiple accounts of pouring baby rice cereal into the morning coffee. 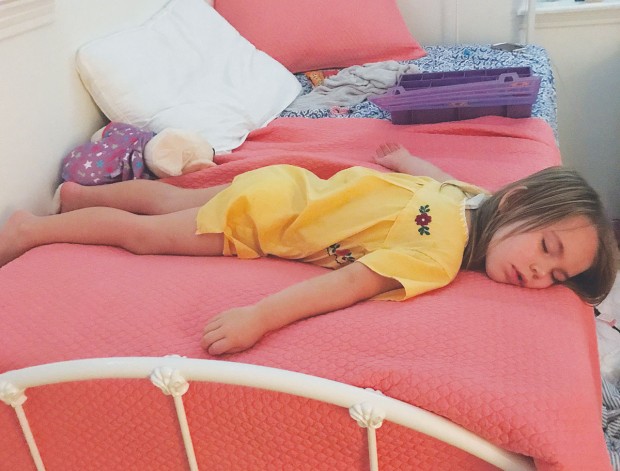 Speaking of coffee, it’s an important staple in a tired parent’s morning. Mom-of-two Shelby Stegent says she shuffled into the kitchen and reached for her favorite white Starbucks coffee mug. Her baby, Emerson, was just 4 months old.

She grabbed the coffee pot and started to pour. She had made her favorite brew, Kona coffee from Java. The hot liquid trickled into her mug. She brought it to her mouth and waited for that instant caffeinated jolt. “I realized, after a few sips, I forgot to put the coffee grinds in,” Shelby said, laughing. “I made a large pot of freshly brewed hot water.”

That wasn’t her only kitchen mishap. “I wanted egg salad for lunch one day, so I boiled some eggs. Well, I totally forgot about the eggs, and after, oh, 45 minutes or so, I heard strange noises coming from the kitchen. The water had evaporated, and I was left with burnt eggs.”

Wesley Gibson, who has three kids (Charlie, 6, Lucy, 4, and Wyatt, 2) was one of the moms who poured rice cereal into her coffee mug. “I didn’t even realize it until I had already stirred it,” she said, laughing.

Unfortunately, a sleepy parent of little ones does not necessarily get to squeeze in a nap. Wesley recalled one day when she took this chance. “I dared to shut my eyes for 10 minutes on the couch while the kids were quietly playing iPad,” she said.

She melted into a deep slumber. She awoke to Wyatt, who was 1 at the time, climbing all over her, soaking wet. “I got up and looked around. During the 10 minutes that I rested and all was quiet, he had climbed on the kitchen island and lined up all the fruit by size, dumped the dog’s water bowl and played in it, and [Lucy] had helped herself to peanuts from the pantry that were all over the floor.” She had been napping in the same room and didn’t hear a thing.

By the time the third child arrives, most parents pick up on tricks for getting their kids to sleep so they can too. Wesley discovered a nifty little device that she swears by called the Baby Shusher – The Soothing Sleep Miracle for Babies. It actually makes “shushing” sounds that a parent would make to calm a crying baby. (You can snag one on Amazon for around $30).

“I got [Wyatt] to sleep as an 8 month old in a crowded airport with it,” said Wesley. “It is a Godsend that I mocked before I had one.”

Editor’s note: Do you have stories of parental sleep deprivation to share with other readers? Comment under this story at thebuzzmagazines.com or email [email protected].