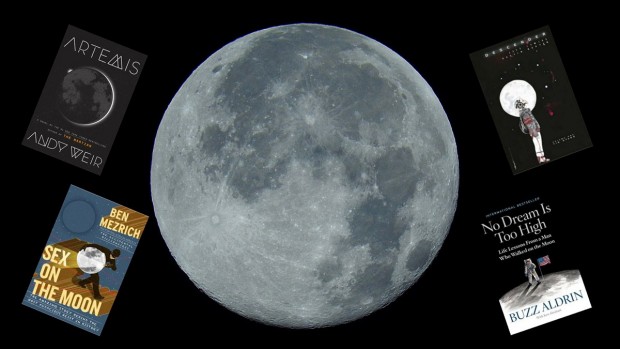 On Jan. 31, Texas will be treated to a very rare lunar trifecta that NASA has dubbed the “Super Blue Blood Moon.” What exactly is a “Super Blue Blood Moon”? It’s a three lunar phenomena occurring simultaneously: a supermoon (when a full moon is closest point in its orbit around Earth), a blue moon (second full moon of the month), and a blood moon (total lunar eclipse, during which the moon takes on a reddish hue). To view the Super Blue Blood Moon, prepare to wake up early, Houstonians: total eclipse begins at 6:51 a.m.!

To get ready for the Super Blue Blood Moon, here are a few of my favorite lunar reads:

The wealthiest people on Artemis, the city on the moon, live in the Aldrin dome, and small time smuggler Jasmine “Jazz” Bashara wants to be one of them. When Jazz is offered a huge payday by a wealthy entrepreneur to sabotage his competitor, Jazz accepts the dangerous offer. Using her intellect, technical skills and resourcefulness, Jazz develops an elaborate and creative scheme, but of course something goes wrong. Jazz soon finds herself caught up in a power struggle for Artemis, dodging an assassin, and running from the law, aka a former Canadian Mountie (uniform and all). Jazz has to figure out how to save her own skin, her beloved city, and get paid. Thrilling, suspenseful, and funny, Andy Weir, author of the The Martian, has deliver another hit with Artemis.

Though our moon is not featured in Descender Volume One: Tin Stars by Jeff Lemire, the cover of this graphic novel features a moon as breathtaking as our moon.  In Descender, a young android named TIM-21 awakes to find that all robots have been outlawed. With bounty hunters on every planet, TIM-21 struggles to stay alive as he journeys through the stars along with his robot dog, Bandit, and the lumbering mining droid, Driller.

“You want the moon? Just say the word and I’ll throw a lasso around it and pull it down…I’ll give you the moon, Mary.” James Stewart famously promised Donna Reed the moon, and Thad Roberts makes the same promise to his girlfriend. Unlike James Stewart, love struck Thad, college student and co-op in a prestigious NASA program, literally gives his girlfriend the moon, well moon rocks. Thad, along with his girlfriend and another female accomplice, both NASA interns, break into an impenetrable NASA lab and drive away with a six hundred pound safe full of moon rocks. Sex on the Moon: The Amazing Story Behind the Most Audacious Heist in History by Ben Mezrich draws from court records, NASA documents, FBI transcripts and interviews to deliver a dramatic narrative of mad genius and crazy love.

The most frequently asked question former NASA astronaut and beloved American hero Colonel Buzz Aldrin receives has nothing to do with space: “Is Buzz really your first name?” Aldrin will be quick to tell you yes, that Buzz is legally his first name, and he’s considering changing his middle name to “Innovator” or “Lightyear”. In No Dream Too High: Life Lessons From a Man Who Walked on the Moon, Buzz Aldrin offers readers life lessons he has gathered here on Earth and in outer space. Laced with wisdom and humor, No Dream Too High will resonate with readers of all ages.

Finally, this list won’t be complete without Goodnight Moon by Margaret Wise Brown. This picture book is a beloved classic and a favorite bedtime story.

Be sure to check out the Super Blue Blood Moon tomorrow, the next one won’t be until 2037!

Holiday in the Plaza