A race in every state 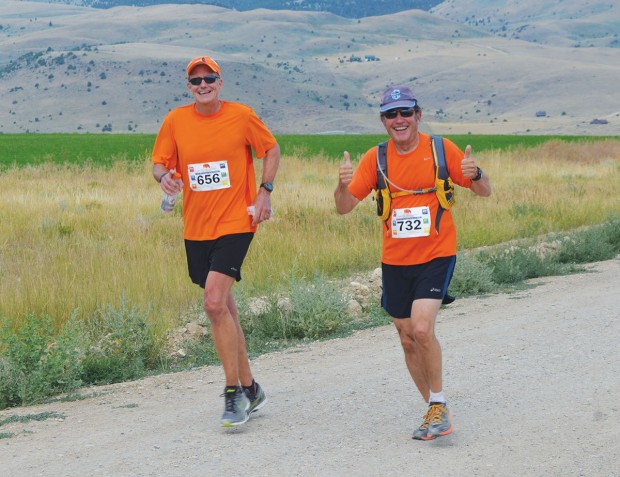 STEP BY STEP Brian Williams, 57, completed his goal of 50 marathons in 50 states last year when he ran the Big Sky Marathon in Montana. Pictured (at left) is Williams running mile 13 of Big Sky with friend Sam Johnson.

Thirty years ago, Brian Williams was 27, and his throbbing feet were hitting the pavement at a 6-1/2-minute-per-mile pace. He was heading into the final mile of a 26.2-mile route in the Snow Goose Marathon in Anchorage, Alaska. Cool air was pumping in and out of his lungs. His wife, Suzanne, tall and slender like Brian, was riding her bike alongside him for support.

That race was a smaller one, with around 100 runners, compared to the tens of thousands of participants at larger races like Boston, New York or Chicago.

“Suzanne rode alongside me the whole way,” said Brian, who was hoping to clock a personal record. “I looked at [her] and said, ‘Can you check behind me and see if anyone is coming up?’” He wanted to calculate the final mile accordingly.

From her bike seat, Suzanne turned her head to check. “She rode her bicycle up the back of my leg,” said Brian, laughing. “Needless to say, we didn’t talk the rest of the way.”

Luckily, the bike didn’t injure the 6’3” runner. Brian did get his personal best time that day, 2 hours and 50 minutes – it’s still his best three decades later – and his placing qualified him for the 1989 Boston Marathon.

Today, 30 years later, he has completed a total of 82 marathons – including one in each of the 50 states, a goal he reached last year. He has raced in ten countries and on three continents, logging every mile in two logbooks, enough to run around the Earth one-and-a-half times.

Brian, a polite petroleum engineer, works as a consultant on carbon capture and storage. He says racing keeps his head cleared of stress, as does setting  “odd” goals, such as “run the Big 5 marathons [Berlin, Boston, Chicago, London and New York City], one in back-to-back weekends, marathon each month for a year, a marathon in each state, and one on each continent.”

The native Californian, now a Memorial resident, joined his high school track and cross-country teams and developed his love of running. Before exams in college, he ran to clear his head of “junk in the brain” – and he still does. His wife isn’t a runner, but Suzanne says she understands his need to run for decompression.

After the University of California, Berkeley, Brian moved to Alaska for work where, eventually, he met Suzanne, a former accountant. Their son, Vitaliy, is now a junior at School of the Woods. “Running marathons became a way to travel to and experience new places. I love to travel, as does Suzanne,” Brian said.

Brian trained with and completed many of the marathons with former colleagues, including Buzz Rajabian. Buzz, who now lives in West University, and Brian run together frequently at Memorial Park. 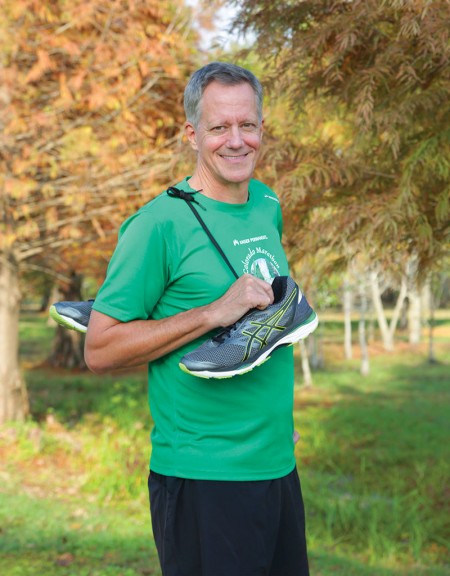 ON A MISSION Brian Williams has completed 82 marathons – one in each of the 50 states, in 10 countries and on three continents. (Photo: lawellphoto.com)

Brian has encountered extreme weather conditions over the years. “[One of the] hottest marathons was Luxor, Egypt, in February 2005, which reached the mid-90s by the end. The course was four laps around the Valley of the Kings desert area. I distinctly remember feeling like I was melting.” He also recalled thawing in a hot bathtub after a freezing marathon in New York in 1995. “They bussed us out early to Staten Island 2-3 hours before the start. Fifty thousand runners had to sit around in cold and wet conditions until the gun. I lucked out and found a school bus to crawl inside of for an hour.”

In 1989, Brian trained for the Boston Marathon through the winter in Alaska, where he lived. But on race day, Boston temps were in the mid-80s, and Brian ended up in the medical tent with severe dehydration.

Last year, he finished his goal of 50 marathons in 50 states, in Ennis, Montana, at the Big Sky Marathon. His son Vitaliy, like his mom 30 years earlier, rode a bike alongside to cheer him on. Brian said the high altitude was tough after training in Houston.

Last year, as Brian trained for the Big Sky Marathon, he raised $6,500 for the non-profit he is on the board of, Compudopt, which provides refurbished computers and training for underserved youth in Greater Houston.

For now, he’s taking it easy, running three times a week, averaging 15 total miles. He’s also joined a twice-weekly boot camp at Memorial Middle School. “I am on a running vacation.” His next goal? “Antarctica, 2020, my fourth continent.”