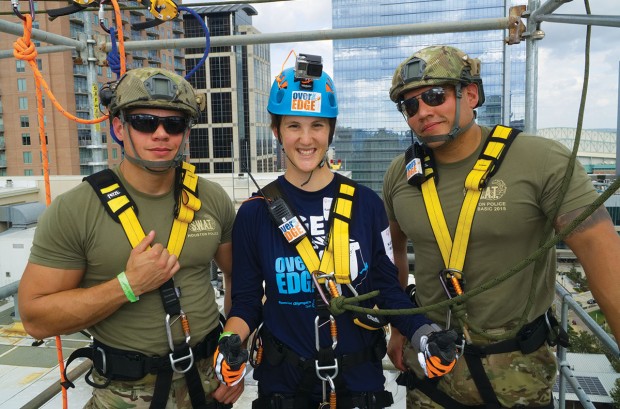 How well do you know your neighbors? We’re looking forward to introducing you to fellow Buzz residents in our new Q&A column: Meet a Neighbor.

A group of co-workers, dressed in business suits and carrying briefcases, happened to look up as they walked near Discovery Green downtown. They saw a tall, brunette woman, in a red and blue superhero cape, rappelling down the 20-story Embassy Suites Hotel. A Houston Police Department SWAT team manned the ropes while she made her way down, not slowly and timidly, but dancing and waving the whole time.

It was like a scene out of The Amazing Race. A group gathered to watch, nervous eyes focused on the descending woman. What they may have been surprised to learn is that the daredevil, Katherine Richards, has intellectual disabilities. She has difficulty with intellectual learning and reasoning, but no trouble doing a Spiderman. 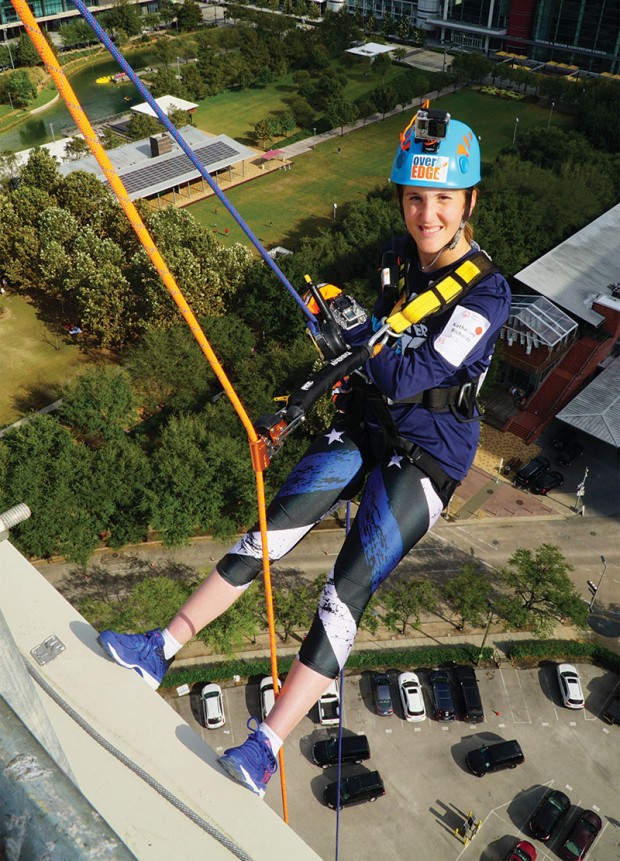 SPIDER-WOMAN Real-life superhero Katherine Richards is all smiles, and no fear, as she rappels down her 30th high-rise building. (Photo: Tom McCarrick, Photographer)

Katherine, 28, has rappelled down 30 high-rise buildings so far, to raise money for Special Olympics through a program called Over The Edge. She was introduced to Special Olympics about 15 years ago while attending The Briarwood School, enrolled in a program geared toward children with developmental disabilities. Katherine quickly discovered she is an athlete.

She also is an internationally ranked tennis player and equestrian (through the International Sports Federation for Persons with Intellectual Disability), and a volunteer and fundraiser for the Houston Mounted Patrol.

Katherine and her mom, Kim, spend every day together. Not only do they live together (along with dad/husband Don), but they also play tennis as partners and opponents, and spend enough hours at Katherine’s volunteer activities to rival full-time jobs. “She is constantly moving and going,” Kim said. “But she’s not rushed. Katherine has a sense of calm happiness wherever she is, and she has never met a stranger.”

You are not afraid to stand at the top of a tall, downtown building, strap yourself to a rope, and climb down hundreds of feet. So, what does scare you?

Not much, really. Why be scared? I get to do this with my best friend, Ashley [Billard], and we do lots of things together. We are the Dynamic Duo, so we have matching capes, just like superheroes. I’m not scared, because I’m used to it. But sometimes I get a little nervous, so I think happy thoughts to calm myself down. It works every time.

Katherine Richards rappelled down the Embassy Suites Hotel to raise money for Special Olympics. See what it was like from her perspective from this GoPro footage. (Video edited by Dylan Aguilar)

Special Olympics has been a part of your life since you were a teenager. How did you get involved?

Special Olympics came to my school, The Briarwood School. I learned how to play lots of sports, like bocce, soccer and tennis. I even won the gold medal for bocce. Everyone is a winner at Special Olympics, because everyone can participate. It’s about having fun and trying your best to win.

The Athletes Without Limits organization selected you to represent the United States, as part of its tennis team. What was it like to play at the Australian Open?

My jaw literally dropped when I got there. I couldn’t believe I was so close to all these professional tennis players, especially my favorite, Novak Djokovic. I didn’t know what to expect, and we played some pretty tough singles and doubles matches against the Australians. And players from Japan, Great Britain and Russia were there, too. It was different from playing at the Houston Racquet Club, that’s for sure. I like to play with my mom, but sometimes I like to beat her. The best way to do that is with an inside-out forehand, down the line. 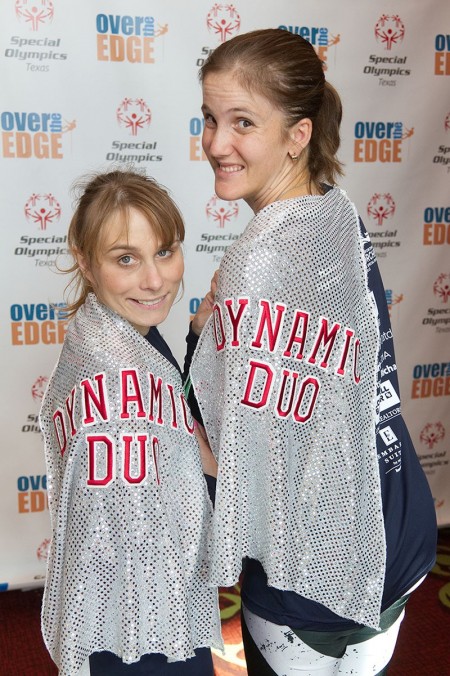 The Houston Mounted Patrol depends on you to groom many of their horses, but you found an instant favorite named Smash. What makes him different?

We chose him because he’s a special-needs horse. He’s deaf. There are five girls, and we raise money to sponsor Smash. We have bake sales and collect money to buy him blankets, a halter and food. He needs a lot of stuff. I also like to teach him tricks, and he has gotten pretty good. He can get all four hooves up on a pedestal at the same time. Have you ever seen a horse do that? Smash even has a Facebook page [Smash, The Houston Mounted Patrol Horse, with 8,400 followers].

You are a very busy lady. Do you have any free time?

Not much, but I like to stay busy. Sundays are my lazy day, and I just watch TV. And I hang out with my best friend, Ashley. You know, the other part of the Dynamic Duo. We go camping, we like to eat out at restaurants, and we even go spelunking. She is really adventurous, too.