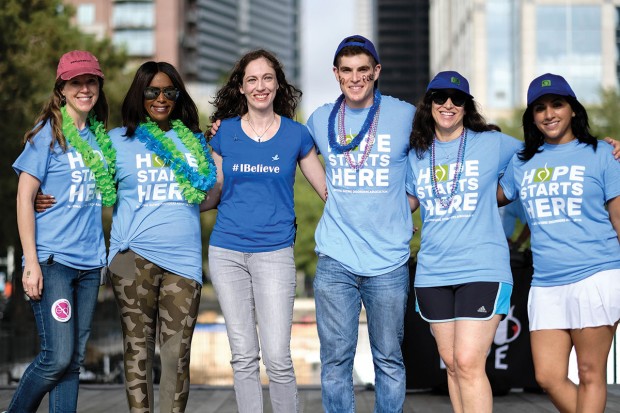 When Nate Nahmias was a teenager in Tulsa, he decided he wanted to make some changes. “I was kind of a pudgy kid,” the chemical engineer says. “So when I was about 16, I decided I was growing up and I was going to change myself.

“I started researching nutrition, how to work out. I wanted to find the most efficient way to shape up. So I started counting calories. Meticulously counting. So if I didn’t know exactly what was in the food, I just didn’t eat it. Then it became a problem.”

That’s when Nate, like an estimated 30 million other Americans, began battling an eating disorder. “Slowly but surely, I started figuring out ways to hide the fact that I wasn’t eating everything. Eventually I got to the point where I was hardly eating and was in the gym every day. At some point, I started to look good, and I got reinforcement because people noticed. Then it became, ‘I can’t stop this because it’s working.’ So I kept going and going and going.”

According to the nonprofit National Eating Disorders Association (NEDA), anorexia nervosa is the No. 1 killer of any mental illness, causing heart failure, osteoporosis, muscle loss, dehydration resulting in kidney failure and dry skin and hair loss. Those suffering from the complex psychiatric and medical illnesses that are anorexia and other eating disorders are preoccupied with body image, weight and food.

“People are insensitive,” says Catherine Wile, a staunch NEDA supporter and tireless volunteer whose daughter battled an eating disorder. “They think, ‘Oh, just start eating. If you are a heroin addict, you learn not to take heroin. Or for alcoholics, you don’t drink. But if you have a problem with food, it can take years to get over it because you need food.

“There is such a stigma about talking about eating disorders,” she says. “People are ashamed of it. They don’t want to talk about it, and they don’t understand. People call me all the time for advice, but it’s always in confidence.”

Catherine and Nate are working to do something about that. This past fall, along with Priya James and honorary chair Deborah Duncan, they co-chaired a NEDA walk at Discovery Green, with a goal of raising money and educating people. And, they’re working to start a conversation.

“This is the second generation in my family that suffered from eating disorders, and I want it to stop with this generation,” Catherine says. “Two of my sisters struggled, but back then we really didn’t know what it was. There weren’t really therapists who helped with it. When our daughter got sick as a junior in high school, she came to us and said, ‘I have something important I want to tell you.’ I couldn’t imagine. I was worried she was going to say she was pregnant. But she said she had an eating disorder, and I was totally surprised. We used NEDA as a source to guide us to the treatment she needed, and now she is fully recovered and leading a healthy, productive life.

“When people see others have gone through this and survived, when they hear positive stories of hope, it makes asking for help easier.” 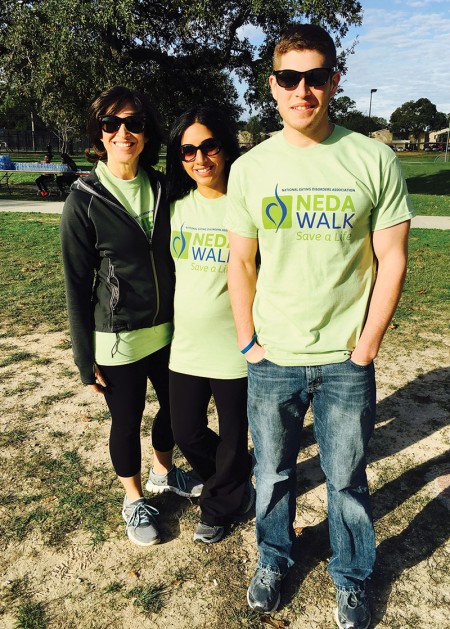 Priya, a NEDA volunteer and new mom who previously worked in fashion marketing and public relations, says, “What triggered [my eating disorder] was breakups with boyfriends in high school. I felt I wasn’t good enough. People think eating disorders have to do with being thin, but they also have to do with control. When you feel like parts of your life are out of control, you can control what you eat.”

While she didn’t receive intensive treatment, or “hard-core therapy,” as she calls it, Priya benefited from working with a therapist for depression. “My parents came from India,” she says. “There’s always been a stigma there about mental-health issues, and they didn’t really understand what was going on.

“Then I grew up and got married. But I relapsed. I had lost about 30 pounds in a month. My family and close friends didn’t realize anything was wrong because I would just say, ‘Oh, I already ate,’ when I was with them. Others started complimenting me on my weight loss. I’d go all day and eat one Cutie orange. Even though I was tired all the time, and I knew I’d relapsed, I was like, ‘Keep on going, you’ll look better.’

“Then I found out I was pregnant and realized I needed to eat three meals a day to give my baby nutrition. After that, I haven’t relapsed too much, but I’ve struggled with baby weight and still have thoughts about restricting. If I eat out with someone – and I’ll eat a lot with other people – or if I indulge in ice cream, which I love, I’ll restrict the rest of my day because I’ll feel uncomfortable and fat and guilty. Then I have to tell myself I need to eat and it’s okay to eat. When I have these lapses, which aren’t full relapses, I look totally fine. Other people don’t know that I haven’t eaten all day.”

Jody Radoff is a clinical social worker specializing in the treatment of eating disorders, anxiety, trauma and depression. “When you realize that a person is no longer at peace with food, that their relationship with food has developed rules, there is a problem,” Jody says. “There’s so much societal pressure to achieve this thin ideal that, in some ways, we can assume that everybody is challenged by the current all-or-nothing thinking around diet and health. Compulsive behavior, whether that’s exercising or removing macro-nutrients from our diet, encourages a disordered relationship with food and our bodies. We’re confusing healthy with skinny, and we’re ignoring the fact that we have diverse bodies.

“A lot of people would say that eating disorders start with a diet,” Jody says. “But you have to look at the underlying issue that spurs those ‘I’m not good enough’ thoughts. What I often tell people is that every person I treat has a different issue. Everyone I meet is just trying to feel better, and this is the vehicle they’re using. Society says, ‘If you’re thin, you’ll be happy.’ They get told how wonderful they look. But it doesn’t fix the underlying ‘I’m unlovable.’”

Eventually, Nate Nahmias’ eating disorder spiraled. “Ironically,” he says, “I worked at a pizza place [in high school]. I remember getting off a shift in the middle of summer. I was so beat down tired I laid down outside next to my car and called my mom and said, ‘I’m so hungry.’ We went and had a big meal, and I actually tasted food, not protein bars. It tasted so good because I was starving and everything tastes good when you’re hungry. But I hadn’t been full in months, and it scared me. So I started to get rid of it.” A new cycle of bulimia had begun.

“At some point, I finally agreed to go into treatment,” Nate says. “Most inpatient centers didn’t accept men, so I went to a residential program in Wisconsin.” With hard work and a lot of therapy, Nate recovered and went on to graduate from Oklahoma State University. “I had a lot of people telling me I’d never go to college. But I went and joined a fraternity and learned how to be social again.

“I don’t think I’ll ever get that bad again,” he says, “but I do still hear that voice in my head every once in a while. If something happens, it’s a coping mechanism. If I skip dinner now for whatever reason, I have weird thoughts about that – what’s wrong, why did that happen? It’s still there for sure.

“I’m still very much somebody who likes to work out and eat healthy, but I believe I’ve learned to do it in a healthy, controlled way, so it’s not affecting my life and relationships.

“What I want to do now is help people. Even now, I have trouble saying I had an eating disorder. It sounds wrong because people don’t talk about it. All that disease wants to do is make you feel as alone as possible. For people who are struggling, I want them to not feel alone.”

Warning signs
Preoccupation with weight, food, dieting, body image
Secretive or extreme ritualized eating habits
Withdrawal from usual friends and activities
Evidence of binge eating, such as the disappearance of large quantities of food
Evidence of purging, such as frequent trips to the bathroom after meals, fasting, or diet-pill abuse
Compulsive or excessive exercising
Discoloration of teeth
Depression, anxiety, irritability