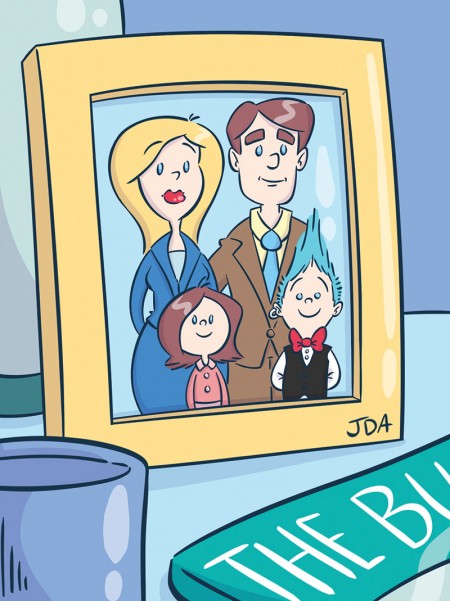 LET IT GO Sometimes, it's just not worth the fight. (Illustration: behance.net/runamokstudios)

My daughters want double ear piercings. I am not a fan. Yes, I grew up in the ’80s, and many friends had them (still do, although only a few continue to use the second hole). So I get that it’s yet one more trend that has come back around. Still, two holes in their ears is not what I want to see on my girls.

After a couple of years of back-and-forth with them about whether double piercings were going to happen in our house, I got exasperated and drew my line: “When Mrs. Smith (my close friend, name changed, whose girls, names changed, are close with mine) lets her girls get double piercings, I’ll let you do it.” And we all know where this is going.

“Today is the day!” was the greeting I got when answering a call from my oldest daughter recently.

“To get my ears double-pierced! Amy’s mom let her!”

I had neglected to tell Mrs. Smith that I had used her as a benchmark. She caved, and she didn’t even know that she sold me out in the process.

I wasted no time calling Mrs. Smith immediately after hanging up the phone with my vindicated daughter. “What got into you?” I half-shrieked, laughing but not.

“I just decided that I’m trying really hard to instill my values in my kids, and sometimes I overdo it and have to step back,” my friend said. “If she wants to walk around with two earrings, who am I to say? I’m pretty lucky if that’s the worst she’s doing.”

A few days later, we all wound up at lunch together. So I asked 17-year-old Amy to chime in. “I asked my parents about it incessantly for like two years,” Amy said. “They told me I would never be able to work in a law firm with two earrings. But then I got my ACT score, and my dad was so proud. They realized I work really hard. He was like, ‘What do you want?’ and I was like, ‘Earrings.’” He said yes. She won that battle.

Battle-picking for parents of children of all ages is paramount. Today I was at Central Market, traversing the aisles throughout the store near a young mom and her little girl. Everything was a battle between these two. Stop touching the broccoli! Don’t put that jar in your mouth! I’m going to have to put you in this cart if you can’t stay by my side! All I could think was that this woman – and the little girl – had a long road ahead.

Another dear friend, who asked to be nameless, an officer of a charitable foundation and mom of two teenagers, said this over a glass of wine: “That’s the biggest rookie mistake you can make. You have to prioritize what you really care about, or everything becomes a battle of wills. The strategy should be to cede complete control on the things you don’t care about, cede partial control over what you’re willing to compromise on, and non-negotiables are just that. If it’s a coat-and-tie affair, you wear a coat and tie. No permanently altering your body until you’re 21. [She disagrees with Mrs. Smith’s earring cave.] You’ll have so much more harmony in your house.”

But how do we determine the non-negotiables?

“Any kind of irresponsible behavior is something you have to go to battle on,” says Elissa Varadi, a mother of two and psychotherapist who has seen countless families and teens in her 30 years of practice. “Establish your rules, whether it’s having friends over and not drinking, curfew, whatever. But if a child wants to dye their hair pink or wear something you don’t like, do you really want to put your relationship at risk over how they do their hair? Is it worth it?

“You need to have some separateness and realize that the child’s purple hair is not a reflection on you. If that’s your rule – we are not going to have different colored hair as long as you’re in my house – okay. But look at the reasons. Is it because the parents are embarrassed or think friends will think they’re doing a bad job? Figuring that out is the work for the parent.”

Then I guess I’ve got some soul searching to do on double earrings. Wonder if I can stretch that out for a few years?