For Rodeo Season, Read Across Houston 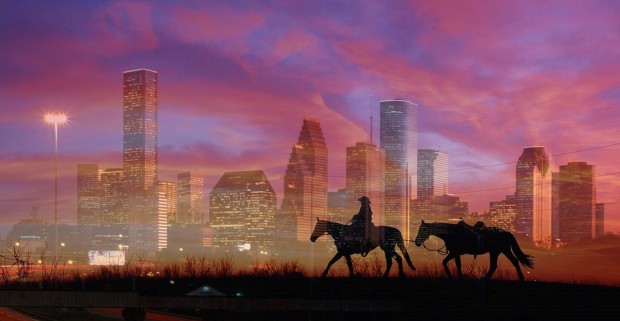 Except for 12 rather hazy years in Austin, I’ve lived in Houston my whole life. So, the Houston Livestock Show & Rodeo has been a yearly rite for as long as I can remember. I saw Michael Jackson in 1973 (or at least I think it was him. From the cheap seats all I saw was a small, sequined shape moving about rhythmically). And I have eaten so many deep-fried Oreos, Twinkies and corndogs that I can feel my arteries tremble with fear when I drive past NRG.

To me, Rodeo is a near-perfect expression of who we are as a city. It is a yearly celebration of us in all our self-contradictory glory. For a couple weeks every year, this city that constantly tears down and paves over its past celebrates its history. Each year, the city that did more than any to usher in the Space-age and whose oil industry put the Old West out to pasture celebrates the cowboy and his horse. But what I like most about Rodeo time is the fact that this polyglot city of transplants, snowbirds and immigrants celebrates a heritage that fewer and fewer of us can claim, but all are welcome to adopt merely by donning a pair of boots and a hat.

Or you could read some of these.

If you can only read two books listed here, but what the most complete picture of Houston—the high and the low, the good and the bad, I recommend Larry McMurtry’s Terms of Endearment and Kim Wozencraft’s Rush. They are both set in Houston, but the cities they portray could be on different planets. If you prefer historical novels, Magnolia City by Duncan W. Alderson is set in Houston in the opulent, oil-soaked 1920s. It is essentially a period love story—frothy and fun. You may recognize the name ReShonda Tate Billingsley from her days as reporter at several Houston TV stations. She is now a celebrated & prolific author. Try Let the Church Say Amen about a successful Houston minister whose family doesn’t necessarily play to type.

The Drowning House by Houston native Elizabeth Black is set mostly in Galveston. It has a mystery at its core. but transcends genre fiction. Chitra Banerjee Divakaruni is not from these parts but has called Houston home for many years and has produced much of her most notable work here. Her most recent, Before We Visit the Goddess, is a novel, set in India, comprised of interlaced stories peopled by a family’s three generations of women.

For the nonfiction folks out there or for anyone wants to know exactly where greed, hubris, total disregard for one’s fellow human beings intersect, you can’t do any better than The Smartest Guys in the Room: The Amazing Rise and Scandalous Fall of Enron.

Finally, to really get a feel for this city, you have to pay homage to two of its overriding passions: food and football. Try the Houston Texans Cookbook, edited by Stacy Hollister.

If after reading all of those, you still don’t feel like a true Houstonian, it is probably because you haven’t tried the deep-fried cheesecake.