How smart are smart speakers? 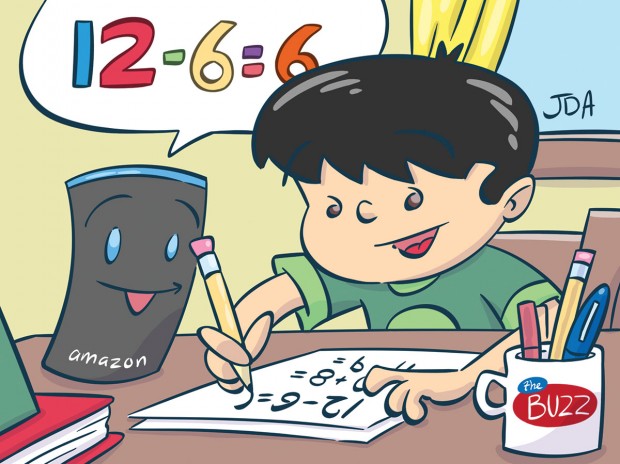 We’ve got “smart” phones, “smart” TVs, even “smart” homes. But what in the heck are “smart” speakers, and why do we need them?

Smart speakers – a.k.a. digital assistants – are wireless, voice-controlled, and set to do a lot more than play music. Currently, the most popular versions – Amazon’s Echo and Google’s Google Home – respond to “Alexa,” or “Okay Google,” respectively, followed by a question or command. By the time this story is printed, Apple should have introduced its HomePod version, powered by Siri.

With expected sales of 24 million this year and new versions being introduced all the time, it seems that smart speakers are the gadget of the moment (or the paranoia of the moment, if you’re freaked out about digital monitoring). What’s the big deal?

A West University mom whose eighth-grade daughter gave her Alexa for Hanukkah says, “Alexa sits on the kitchen counter, and I often just say, ‘Alexa, please play classical music,’ while I work or clean the kitchen. Along with lighting candles and having having fresh flowers in the house, she helps create a pleasing backdrop.”

Other uses: ordering pizza, calling an Uber, checking the status of Loop 610. Trivia’s turned less trivial in Stephanie Kim’s home, thanks to the MD Anderson Cancer Center director of community relations’ 8-year-old son Caden. “Caden was ‘bored’ while doing his math homework and just started reading the problems to Alexa, and she gave him the answers,” Stephanie says. Recently, Caden’s homework asked, Bobby told his teacher 12 – 6 = 5. True or False. How do you know? Caden’s response: “False. Because 12 – 6 = 6. Alexa said so.” Followed by a drawing of the crying-laughing emoji.

“We tried telling him using Alexa [for homework] was cheating,” Stephanie says, “but his response was that he already knows his math. As long as he’s only using her for schoolwork that he already has a good grasp of, I’m fine with it.” Caden also has been known to ask Alexa whether Santa Claus is real and, if so, how in the world he gets to so many houses in a single night.

“Alexa also reads him bedtime stories – it’s called Amazon Storytime – and she raps if you ask her. [Caden] thinks that’s awesome. He says hello to her in the morning when he comes downstairs, and she always has a random fact for him. I think since he’s an only child, he treats her like a sibling!”

Laura McCullough, a mother of two, included Amazon Echo Dots, smaller versions of the Echo, in her teens’ Easter baskets last year. “[When I] learned they could be used as intercoms, that was a game-changer,” she says, “so I bought the larger one for the kitchen. I much prefer using Alexa over yelling up the stairs to get their attention at dinner time.” Laura also included Wemo plugs with the Echo Dots, so that the kids could connect their bedside lamps. “They simply say,  ‘Alexa, turn on-off the lamp,’ and the lamp works on command!”

Mother of three Peta Rubenstein likes Alexa because, “When you’re laying in bed and you have those inspirations, but you’re about to go to sleep, you can say, ‘Alexa, remind me at 7 a.m. to do whatever.’” She also uses Alexa as a surrogate smartphone minus the texting, FaceTiming and voice calling. “[Kids] can set alarms and listen to music and do all the ‘safe’ things without having to have their actual phones in their rooms,” she says.

Peta’s 15-year-old son Kai received an Echo as a gift from a friend. “I knew I’d like it,” Kai says, “but I use it every day. I connected Spotify and Amazon to it, so I can play my playlists. You can say, ‘Alexa, tell me a joke.’ They’re not that good, but she’ll do it. She’ll also play Simon Says and repeat what you say. If you ask her, ‘What’s up?’ she can tell you the weather forecast, but she’ll also give you everything that’s going on, like with the presidency, in 30 seconds.

“I turned it on from Evelyn’s Park [a couple of miles from home], just to freak people out and it worked,” Kai says.

“You can also order stuff from Amazon straight from it, like a 24-pack of Sprite, and it does it because it’s connected to my mom’s [Amazon] Prime.”

“Wait a minute, you go upstairs and charge whatever?”

When we asked if he minded having Alexa rather than a phone in his room at night, Kai diplomatically told us, “I don’t quite want to get into that with my mom around.”