Phones at the Table 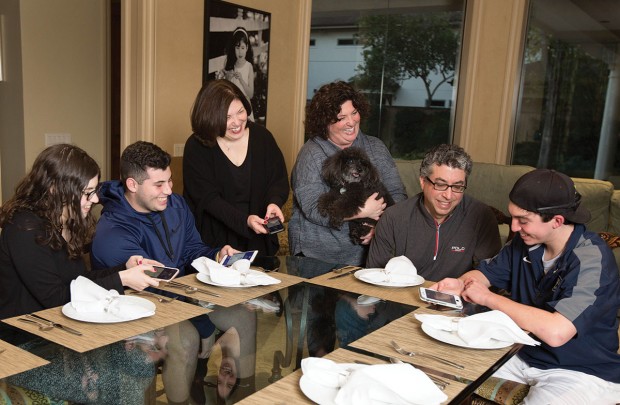 GAME NIGHT Bonnie Winograd (third from left) joins her family – Nicole Winograd, Jake Feldman, Hayley Feldman, Marc Feldman and Aidan Feldman – in a dinner-time round of the online trivia game HQ. The game is the only exception to their no-phone rule. (Photo: Dylan Aguilar)

Even though you won’t hear many people say it’s okay to talk or text on cell phones at the dinner table, there sure is a lot of it going on.

Seems like we could walk into any restaurant at any time and find at least one table of diners looking at blue screens instead of each other. How do we bring back the emphasis on eye-to-eye connection?

“We have lost the art of conversation,” says family law attorney Wendy Burgower. To reclaim it, Wendy says, when she puts a phone on the table, she’ll say, “’Do you mind if I put this phone here, as I am expecting an important call?’ Or, if they have theirs on the table, I ask, ‘Is everything okay?’ This starts a great discussion about how we need to put them away and enjoy our time together.”

In a twist on Wendy’s version of phone etiquette, one neighbor, a writer, and her friends have made a game of it. When they sit down to a girls’ lunch, everyone turns their phone on and puts it face-up in the middle of the table. The first one to succumb to the phone temptation and pick up pays for everyone’s lunch.

Parenting coach Randi Rubenstein, herself a mother of three, agrees with the no-phones-at-the-table policy. “People before tech is our rule,” she says. “If people are playing on phones at the table, and it’s one of my kids, I remind them of the rule.” Randi calls staring at screens instead of into eyes nocializing. Raising the stakes beyond the table, her car is also a no-phone zone. “If the driver can’t be on the phone, then neither can the passengers.”

Aside from the question of the appropriateness of phones at the table, dinnertime is often the only time when families connect without interruption. “Dinnertime has always been pretty sacred at our house with everyone waiting until everyone else gets home before the four of us sit down to eat together,” says jewelry designer Tracy Pesikoff. “We have always used this time to discuss news of our days, highlights, lowlights, upcoming happenings. If phones make it to the table, they are in pockets or on the side of the table turned over. On the rare occasion that they are used, it is probably because we are discussing specific plans and need clarification about a time or place. Or, if we need to text someone to ask a specific question about what we are currently discussing then it is okay. Basically, a phone is only briefly and swiftly used if it specifically pertains to the conversation that the four of us are having at the table.”

And it’s not just kids who are the culprits during family dinner. “Can you believe that we implemented the no cell phone rule at the dinner table in order to get [husband] Wayne off his Blackberry years ago?” says Stork Club owner Heather Kearney. “It was long before the kids even had cell phones.  We’ve kept that rule all these years and it has worked well. [Daughter] Bridget actually nudged me the other night to see a family of five behind us at Molina’s, where every member of the family was on their phone in some capacity, mom and dad included, and no one was talking at all.  Guess our point was made.”

But where there are rules, there are always exceptions. “Our rule is no phones at the dinner table because it’s family time.” says Bonnie Winograd, whose sister’s family has been living with her own since Hurricane Harvey. She adds, “Our only exception to the rule is HQ,” referring to the wildly popular, super-fast online trivia game that dominates a million-and-a-half smartphones twice a day with the promise of miniscule cash prizes … and glory.

“Not everyone knows all the answers [to the trivia questions], so as a group working together you do much better. [Brother-in-law] Marc answers the medical questions, [daughter] Nicole and the boys [nephews] answer the pop questions.” Bonnie’s parents, Lynn and Willie Goldberg, host traditional Jewish Friday night Shabbat dinners at their home and always have implemented a strict no-phone rule for the night. “But we told them it’s trivia and often historical, and then the host [of HQ] said, ‘Shabbat Shalom,’ one Friday night, so now they allow it!”

Of the family of nine, Bonnie and her sister Hayley Feldman are the only ones not playing. “Because we’re in the kitchen cleaning or something. But we still try to throw out answers from the kitchen!”