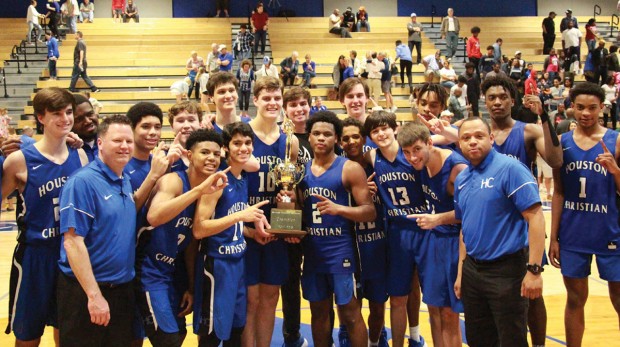 The Houston Christian Mustangs wrapped up a spectacular season in boys basketball by defeating the rival Episcopal Knights 67-53 in the championship final of the Southwest Preparatory Conference. With the victory, the Mustangs finished the season with an overall 31-6 record and a top five ranking among all large private schools in the state.

“From start to finish this entire season, this group of guys showed a daily pursuit of excellence,” said Mustangs head coach Ron Crandall. “It’s something we preach constantly. Plus, we have great senior leadership and an extremely talented group of basketball players.” So talented, that a trio of Houston Christian seniors, Miller Kopp (Northwestern), Blake Foley (Wheaton College) and Jalon Clark (Texas A&M-Corpus Christi) will play college basketball next season. Plus, highly rated junior guard Sahvir Wheeler has already committed to play for the Texas A&M Aggies, with yet another season of high school ball to play.

“This championship really meant so much to us,” said Kopp. “We worked so hard for the last four years, and now we’re seeing the fruits of our labor.” In the SPC final, Kopp, Wheeler, Clark and Foley all were major contributors, while junior guard Sam Torn connected on a series of three point baskets in the second half to help secure the victory. “I feel like this team can compete for a state championship at any level of basketball in the state,” said Crandall. “We defeated several large school powerhouse programs this season. We’d be a scary team for anyone to play.” 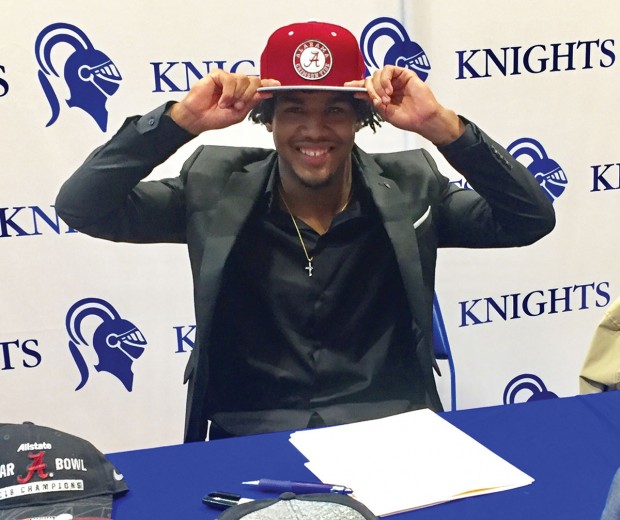 It was high drama on National Signing Day at the Episcopal High School Centennial Gymnasium, as Knights senior wide receiver Jaylen Waddle prepared to make his much-anticipated collegiate choice. To add to the suspense, Waddle placed five hats on top of a table representing the schools he had selected as his collegiate finalists (Florida State, Texas A&M, TCU, Alabama and Oregon).

As the anticipation grew before an audience of hundreds of classmates, teammates, family and media, Waddle proudly took hold of and put on the hat of the Alabama Crimson Tide. “I’m not going to lie; it wasn’t an easy decision,” said Waddle. “There’s a bunch of great schools, and I met a lot of terrific people through this entire process. A lot of thought and prayer went into the decision, and ultimately Alabama was my choice – Roll Tide.”

Rated as one of the nation’s top five receiving prospects, Waddle had been recruited by virtually every major football program across the country. “I had one college scout tell me that Jaylen is the best receiver he’s ever seen coming out of high school,” said Episcopal head football coach Steve Leisz.  “Alabama definitely landed a great player and a terrific kid.” 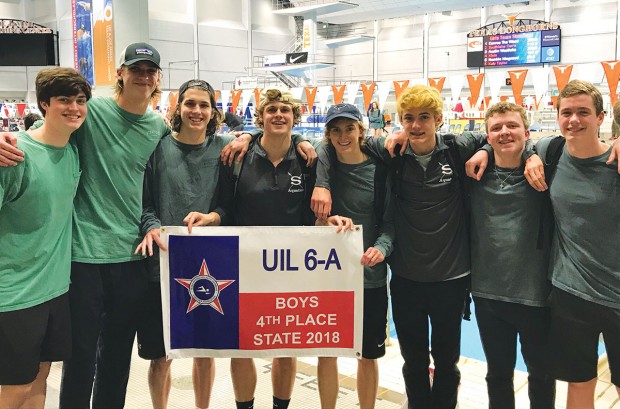 Led by another spectacular meet from senior sensation Clayton Bobo, the Stratford Spartans finished fourth overall at the UIL Class 6A State Swimming and Diving Meet. With his gold-medal victories in the 50- and 100-yard freestyles, Bobo, who will next swim for Texas A&M, closed out his decorated high school career with five individual state titles over the last three seasons. “To see the impact Clayton has made on this swim program and his teammates has been fun to watch,” said Spartans swim coach Mike Hoskovec. “He’s just such a positive person to be around.”

In the relays, Bobo teamed with junior Kyle Storemski, junior Dean Rathgeb and junior Cole Oliphant to finish second in the 200-yard freestyle relay. Plus, Bobo, Storemski, Rathgeb and freshmen Max Zuanich won a bronze in the 200-yard medley relay. “It was a really good meet for our entire team,” added Hoskovec. “We’re one of the smallest Class 6A schools in the state, and for us to bring back a banner as a top five finisher is quite an accomplishment.

Meanwhile, it was also a tremendous meet on the girls side for Stratford junior Emma Stephenson.  Stephenson won the gold medal in the 50-yard freestyle in a blazing time of 23.04 seconds. It also marked her second gold medal at state, with Stephenson also winning the 100-yard buttery at the Class 5A state meet back as a freshmen. “Emma had the eye of the Tiger,” said Hoskovec. “She’s done anything and everything to win a state title. It’s just awesome to see a kid go out there and earn a championship.”