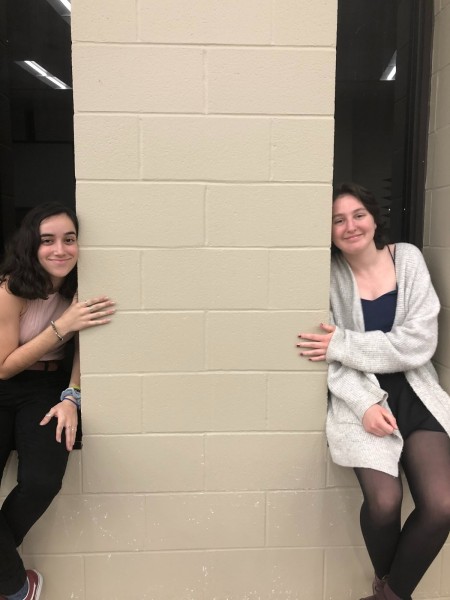 Students giggled and chatted as the awards ceremony drew to a close. After a long night full of St. John’s winners, it was time for the highlight of the evening: the announcement of the top 10 competitors.

The President of Texas French Symposium announced that these were the truly elite students, those few contestants who had distanced themselves from nearly 800 of their peers. The room turned electric.

It wasn’t a long wait until the first St. John’s winner was revealed: Junior Sophie Gillard had placed ninth out of 756 total competitors. The school’s section of the audience exploded into applause. Gillard dashed up to the stage to collect her plaque. Gillard had won 2nd in Prose and third in Sight Reading in Level 5-6, one of the most advanced pools of competitors.

Not two minutes later, her sister, freshman Anne-Charlotte Gillard joined her on stage, placing fourth overall. Loud cheers resonated through the massive auditorium. She placed first on the Grammar and Listening tests for Level 2.

Just a short while later, junior Raunak Kundagrami collected his plaque for second place and stood amongst the other winners. Kundagrami competed in Level 5-6, one of the most advanced pools of competitors. He had won the Poetry category for his level, and he finished first on the Civilization, Vocabulary and Grammar tests in his group.

“I never thought I would ever finish in the top ten at any Symposium, so finishing in second place certainly felt special,” Kundagrami said. “It provided a small amount of validation that justified my passion for and pursuit of French study. And more than anything, it felt good to know that I was contributing to my team's effort to the greatest extent that I could.”

Finally, sophomore Jordan Fullen was named the top overall competitor after dominating the Level One group and placing in eight different categories. St. John’s was named the overall winner of Symposium for the first time in school history.

Texas French Symposium is a statewide French fine arts competition. This year, a team of 25 students traveled out to The Woodlands High School to compete on March 23 and March 24. They were sponsored by three teachers: French teachers Shelley Stein and Jacqueline Vest, and English speaker and French speaker Brian Beard.

Common events at TFS include poetry, prose (in which students read a prepared selection to a judge) and guided speaking (in which students are given a picture and are asked to create a story around it in French). Other categories include Baccalauréat, a Quiz-Bowl-esque trivia contest, along with more traditional fine arts, such as watercolor, painting and pencil drawings.

Kundagrami has come to appreciate the culture around Symposium.

“Symposium is less about testing ones French ability and more about celebrating French language and culture,” Kundagrami said. “Symposium brings together a group of people with only one thing in common: a love of French, and for two days, [it] creates this community bound by a language.”

Students and teachers spent the night at a nearby Hyatt hotel during the two day concours. The morning of the 24th, the team awoke early to drive back to The Woodlands High School and resume competing.

Junior Juliana Aviles, a member of the Drama Group and Vocal Group, believes that the overnight stay is an important part of Symposium.

“I think it’s a good experience to stay in hotels,” Aviles said. “You get to bond with people in French, and you get to have a good time, whether you’re studying last minute or just chilling.”

“Winning is great, but the best part about symposium for me is the people you meet waiting in line for your competitions,” Kundagrami said. “You may only see them once a year, but when you can enjoy symposium for more than just the competition, and when you can learn to cherish the community aspect, that is when you truly have a holistic symposium experience.”