Sunday Mornings with Rania: A Tribute to Mrs. Barbara Bush 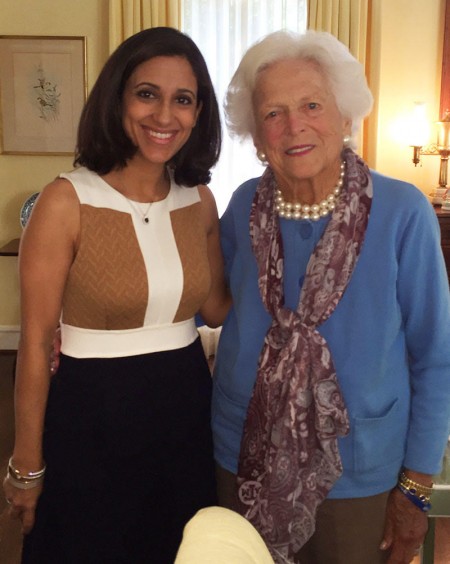 Rania Mankarious, pictured here with Barbara Bush, shares what she learned from the former First Lady.

​We were born 50 years and 10 days apart. She in New York, me in Boston; both in the month of June. Beyond that, there was nothing even remotely similar about our lives. She was considered US royalty, our First Lady and so much more. Me, a child of immigrant parents working hard to provide a life for their family. That said, from the time she took the national stage and I was old enough to take notice, the young child in me looked up to her, emulated her and followed her every move.

The truth is, I have loved Mrs. Barbara Bush for as long as I can remember. Her example has shaped me. While I learned so much from watching her, here are the top four things she taught me:

Love Him, Stand by Him, but Be Your Own Person

Certainly, Mrs. Bush was her own breed of feminist. She was born in 1925, just five years after women won the right to vote. She met George H.W. Bush as a teen and dropped out of Smith College to wed him. Their love story was recognized by all with a marriage that ultimately lasted 73 beautiful years. She treated him with great respect and made her home wherever his career brought them.

But in her own way, despite that time in history, Mrs. Bush would put on her pearls and was very much her own woman. She was a pioneer in every way – standing up for equal rights and having unique opinions on abortion. Always ready to meet a challenge, she was the second woman ever to take the stage and speak at the national party convention nominating her husband for president. The first was Eleanor Roosevelt in 1940. As First Lady, Mrs. Bush was the one who turned the position from flowers and fashion to finding important platform issues that she would work to solve during her time at the White House.

Many issues were near and dear to her, but her primary focus was promoting family literacy. Mrs. Bush played an integral role in advocating for literacy, from the passage of the National Literacy Act of 1991 to her work with Barbara Bush Literacy Foundation – she never stopped working toward that mission.

Without question, to all who knew her, she was considered strong, sarcastic, genuinely friendly and witty, and she beautifully used those attributes to achiever he personal objectives.

“You don’t just luck into things as much as you’d like to think you do. You build step by step, whether it’s friendships or opportunities.”

“If you help a person to read, then their opportunities in life will be endless.”

“Some people give time, some money, some their skills and connections, some literally give their life’s blood. But everyone has something to give.”

“If more people could read, write and comprehend, we could be much closer to solving so many of the other problems our country faces today.”

Love Your Family First and Foremost

As busy as Mrs. Bush was and no matter where her life brought her, if she had an opportunity to speak, she was sharing her love for her family. In her wise ways, she beautifully challenged the notion that strong women must be independent and selfish. In fact, when Mrs. Bush was asked to give the commencement speech for Wellesley class of 1990, 150 students circulated a petition saying Bush was a poor choice for the all-women’s college because she had “gained recognition through the achievements of her husband.’’ Furthermore, she had dropped out of Smith College after two years to marry the future president, George H.W. Bush.

Mrs. Bush, aware of the strife and thoughts of young women who had different views on life and many less experiences, still gave the speech, of course. She gracefully walked up to the podium and smiled as she looked at the sea of students who attended; she walked off the stage having given what became known as speech #45 in the American Rhetoric’s Top 100 Speeches of the 20th Century. That was Mrs. Bush. In her humble way, she taught all of us the value of sticking together, respecting each other and creating lifelong family bonds that left no room for compromise.

In her words at that Wellesley College Commencement Speech: “At the end of your life, you will never regret not having passed one more test, not winning one more verdict or not closing one more deal. You will regret time not spent with a husband, a friend, a child or a parent.”

In her unbelievable life, traveling all over the world and meeting so many from different walks of life, all have said that Mrs. Bush spoke truthfully, honestly and with great respect of all. And she was funny. I think of her life, the days she lived while George H.W. Bush was a US Representative in Congress in Texas in the late ’60s. When he was later appointed by President Nixon as a US Ambassador to the United Nations or when he was appointed by President Ford to be head of US Liaison Office in the People’s Republic of China in the ’70s. Soon after that, George H.W. Bush and Mrs. Bush were firmly on the road to the White House. Despite where they lived and who they met, Mrs. Bush made her home and established true relationships with diplomats, celebrities, religious leaders, elected officials, media members, law enforcement, advocates, and everyday citizens. She was known to always speak frankly, maybe had to apologize a time or two, but was consistently and deeply respected by all.

“Avoid the crowd like the plague. And if they quote you, make damn sure they heard you.”

“Never lose sights of the fact that the most important yardstick of your success will be how you treat other people – your family, friends, and coworkers and even strangers you meet along the way.”

It May Seem Perfect, But It Never Really Is – and That’s Ok

As incredible as Mrs. Bush’s life was, she had her fair share of hard times. She lost her first daughter, Robin, in 1953, due to leukemia. Robin was only three years old. Mrs. Bush handled this deeply hard time with faith and grace and peace. Additionally, during her long, incredible life, records state there were moments when the former First Lady felt depressed. That said, those accounts speak of a Mrs. Bush who would face that depression by reaching out to others and serving as many as she could. She grabbed all issues head on. We saw the same when her son, Neil, was diagnosed with dyslexia at a young age. Mrs. Bush dove into the issue and worked to offer every option of help and support for not just her son but all children with learning disabilities.

The point was, Mrs. Bush’s life was charmed but still normal. She faced heartache and challenges even though she is the mother and grandmother of the most famous American Family. I believe that in her struggles, she provided a strong example, faith and hope to so many of us who struggled as well. Forever a legacy, forever a light, we all learned from her, whether in the highest highs or lowest lows.

On Robin’s death, she said in 2012: “I was combing her hair and holding her hand. I saw that little body, I saw her spirit go. Robin to me is a joy. She’s like an angel to me, and she’s not a sadness or a sorrow.”

“If human beings are perceived as potentials rather than problems, as possessing strengths instead of weaknesses, as unlimited rather than dull and unresponsive, then they thrive and grow to their capabilities.”

“You have to love your children unselfishly. That is hard. But it is the only way.”

I had the chance to meet Mrs. Bush many times but I was fortunate enough to sit with her in her home to film a tribute video for Dave Ward and the Dave Ward Building, Crime Stoppers of Houston. While there, I watched her almost as if time were in slow motion. She was wearing her pearls as she walked around her home and moved pictures of her children and grandchildren. I almost started to cry.

Mrs. Bush, from the beautiful pearls you wore, to the strong yet beautiful hands that touched the life of the President you wed, to the President you raised to all your other incredibly accomplished children and grandchildren who loved their Enforcer so very much to those in the schools that bear your name. From the kiss you and President Bush shared on the Kiss Cams at Houston games, to the commercials you filmed with JJ Watt to greeting international dignitaries with grace and elegance that made us proud to the candor and kindness by which you would take your dogs to play in Houston parks and say hello to all. To the “woman of your time” that you were and to the way you gracefully paved the road for many of us that were proudly learned so much from you, we thank you, we love you and we wish you an eternity of rest and peace in the presence of Robin and the God you believed so beautifully in.

In her words: “I know there is a great God and I am not worried.”