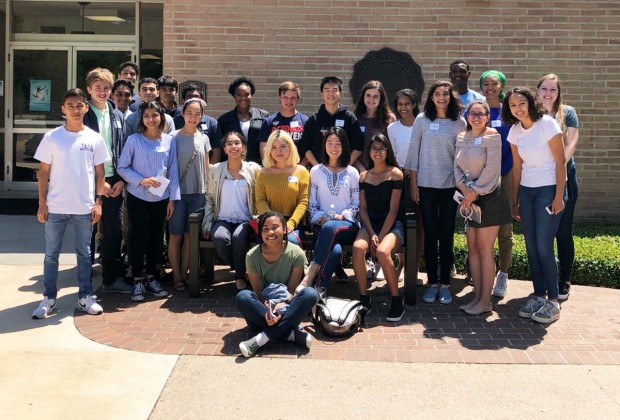 On Saturday, April 28, four Houston private schools gathered for the first-ever interschool diversity conference. Kinkaid, St. John’s, Episcopal and Awty all had students representing their school at the conference.

On Saturday, April 28, four Houston private schools gathered for the first-ever interschool diversity conference. The conference was organized by Awty International School sophomore Angela Chen and prompted by her experience at the Student Diversity Leadership Conference (SDLC) this past year in Anaheim, CA. Her goal was to bring aspects from the conference in Anaheim to the greater Houston area. With the help of teachers from four Houston schools, she made her vision a reality. Kinkaid, St. John’s, Episcopal and Awty all had students representing their school at the conference held at Kinkaid.

The conference kicked off with a short introduction followed by the attendees breaking into smaller “family” groups. The family groups were randomly chosen discussion groups where the attendees discussed a series of prompts related to diversity and personal identity. After about an hour of discussion, the attendees were then separated into affinity groups.

“I think that this is a great initiative that helped start meaningful dialogue on diversity issues at Awty and other private schools,” stated Awty attendee Ivan Mangal, a junior.

The event was an interesting experience and proved to be extremely valuable for all of the attendees. The employees from the various schools expressed their desire for this type of event to become an annual or even bi-annual occurrence. Hopefully, this event and events like this in the future will raise awareness about the importance of diversity in our everyday lives.