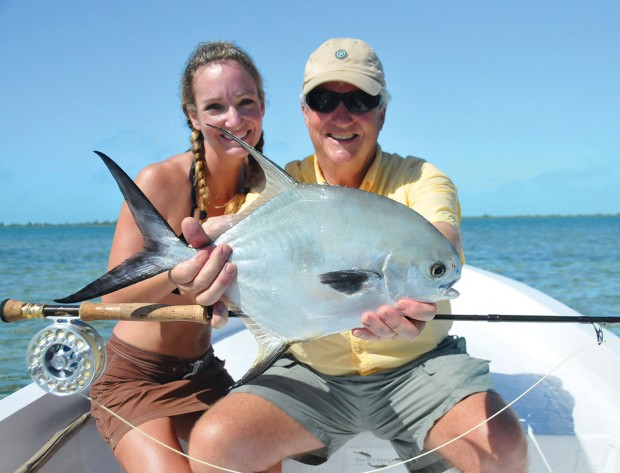 FISHING BUDDIES World-record angler Meredith McCord’s lifelong passion for fishing came from her late father and fishing mentor, Rick McCord. Here, he holds his first permit fish caught on fly in Ambergris Caye, Belize, in 2013, prior to his cancer diagnosis.

On Father’s Day almost two years ago, 42-year-old Meredith McCord was on a mission. She was at her family’s Navasota farm, fishing in the pond that her late father, Rick McCord, had built and stocked years earlier with largemouth bass.

It was there that she hooked one that would be named her 100th world fishing record. “It was very emotional,” recalled Meredith, who had lost her beloved father to kidney cancer eight months earlier after a rough 18-month battle. This was her first Father’s Day without him.

Meredith, a Buzz resident and an avid outdoorswoman, has been fishing since before she could walk. Now, she fishes all over the world, using many methods but most with a fly rod in hand. Her favorite type of angling, whether in fresh or salt water, is sight fishing, where she sees the fish that she is pursuing.

She caught her lifelong fishing bug from her dad, a Houston real estate developer. “Fishing was one of his favorite pastimes and hobbies,” she said.

When put to the challenge of defining herself as an angler by some TV producers, Meredith started the pursuit of breaking world records. She broke her first world record in December 2012, when she caught a 32.58-pound redfish on fly in Venice, Louisiana.

The records are kept through the International Game Fish Association, a not-for-profit organization for the conservation of game fish and promotion of ethical angling practices. For each species, there are dozens of possible records depending on gender, age, method of catching and strength of line.

The petite blonde graduated from Vanderbilt University with a degree in human organizational development and studio art. She moved out to Jackson Hole, Wyoming, in the summer of ’96 to learn the art of fly fishing before starting her first job in Atlanta. 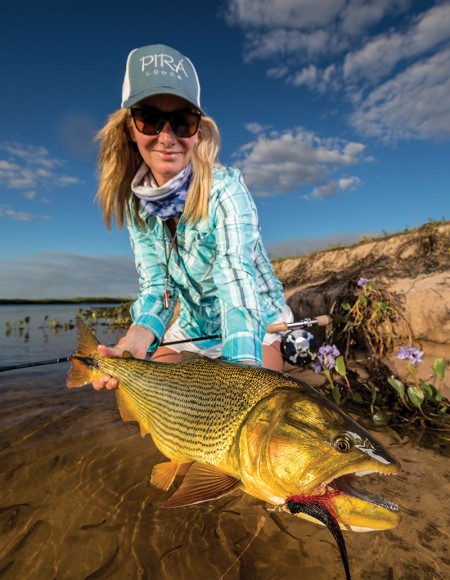 Meredith says she felt inspired by the movie A River Runs Through It and wanted to learn fly fishing. She found several locals to teach her. “It’s a romantic way of fishing because it’s so raw and primitive,” she said. After that summer, she moved to Atlanta. Within a year, her performance review came back stating, “Meredith needs to wear her panty hose and shoes a little more around the office.” She realized corporate America was not for her. In 1998, she moved back home to Houston to open The Mad Potter, a paint-your-own-pottery studio, after seeing the concept in Atlanta.

Her dad, Rick McCord, grew up on a lake hunting and fishing. He passed on his love for the outdoors to his three children. He and Jane raised Meredith, Ryan and Anne without television (except for 30 minutes on Saturday mornings). The McCords fished and explored their Texas farm and spent summers in Ontario, Canada, fishing on Lake of the Woods at their family’s cabin.

Rick and Meredith always shared a love of fishing. “He got so excited over my first world record,” said Meredith. Four months later, her dad was with her as she broke her next two records.  Rick’s delight pushed Meredith to keep finding new records to break.

A year later, in 2014, after a father-daughter fishing trip to the Seychelles, Rick was unexpectedly diagnosed with stage 4 kidney cancer. In December 2014, Meredith made a promise and set a goal to break 100 world records. Since her fishing partner could no longer go with her, she brought the stories back to him.

And she did. Meredith would fish for her dad, breaking record after record to tell him all about it. “It got his mind off his pain and his battle,” she said. “I would snuggle up beside him on his bed with pics on my iPad and tell him stories of my catches and adventures. He would always grab my hand squeezing and say, ‘Atta girl. I am so proud of you. Keep it up.’”

Rick tried out multiple cancer drugs and treatment options. “Fishermen are always optimistic, and my dad was the constant optimist,” she said. “’He would say, ‘This is just a minor speed bump.’” But in October of 2015, Rick McCord lost his battle with cancer. Meredith was at 78 records when he passed.

Meredith continues to fish all over the world. She has been named the “Top Female Angler” two years in a row by the IGFA, as well as grand champion of the Ladies Tarpon Tournament in Islamorada, Florida, last year.

She has broken 144 world records to date, with another seven pending approval.