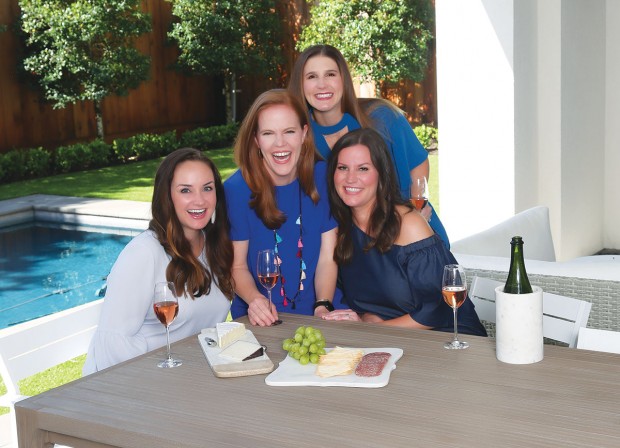 Elizabeth Smith, Kirsten Galtney and Ashlee Veit (from left) and Liz Walsh (standing) get together for “girls’ nights out” to decompress from the job of raising young children. (Photo: lawellphoto.com)

Parenting young children can be mentally and physically exhausting. Whether you have one kid or multiple kids, are a stay-at-home parent or a full-time working parent, taking some downtime to unwind and de-stress can feel like a lifesaver.

Elizabeth Smith had one of those ultimately relaxing moments this Spring Break, as she sat on the beach in The Bahamas with her husband Ben, relaxing with books while children Addison, 4, and Mercer, 2, played and made sand castles.

Trips are great, but sometimes simple moments to breathe are all you need to rediscover your happy place: curling up pretty much anywhere with a book, taking a hot bath or going on a run – or whatever works for you.

Elizabeth unwinds with exercise or a nap when her kids are away. She also likes to get together with girlfriends and says it is “crucial for her sanity.”

Her group includes friends and fellow moms Kirsten Galtney, Liz Walsh and Ashlee Veit. They go out to a restaurant or meet at someone's house for a playdate “so the kids can run around and we can all catch up.”

Stay-at-home mom Liz Walsh has two boys, J.D., 5, and Roy, 3. She exercises while the boys are at school, to recharge her batteries. Liz attends a spin class or works out with a personal trainer.

She also enjoys traveling out of the city to kid-friendly places. “Recently, we went on vacation [to the Disney Aulani Resort in Hawaii] that had a kids’ club that both boys could attend, so we were able to go get a massage at the spa while they played in the club. That was the most relaxing moment of the vacation for me,” said Liz. 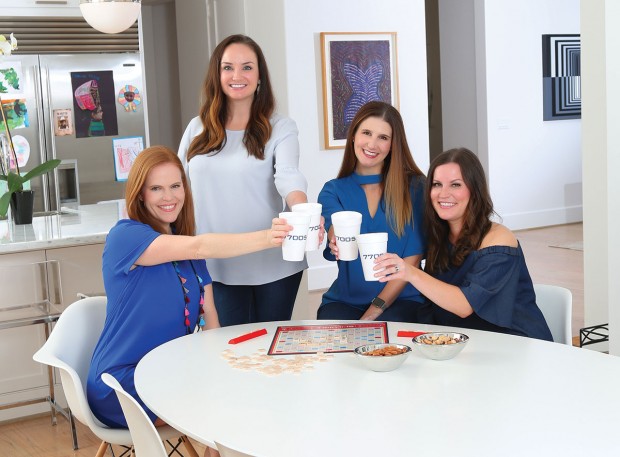 Kirsten Galtney, Elizabeth Smith, Ashlee Veit and Liz Walsh (from left), who all have children under 4, take time to catch up over wine and board games. (Photo: lawellphoto.com)

She says she also enjoys grabbing dinner or drinks with her husband, James, an investment banker, or friends. Sometimes, having a late night can be hard the next day when you have young kids at home. Recently, Liz went out for a girls’ night at Coppa Osteria in the Rice Village. It was easy to walk over, since her family is living next door at Hanover Rice Village while they finish work on their house. “We decided to stop for one last drink before going home,” she says. “It seemed like a great idea at the time until the fire alarm for the apartment went off at 5 a.m. the next morning. I was wishing I had skipped the drink and gotten to bed earlier.”

Mom-of-two Kirsten Galtney says exercise is also her key to relaxing. She has a Peloton indoor exercise bike in her house. “It allows me to handle anything that comes my way in a calm way,” she says. She also enjoys a monthly facial at The Houstonian or a manicure/pedicure. “It’s important to remember to take care of yourself,” she says.

Kirsten and her husband Rob put their kids down to bed at 7 p.m. to have some time in the evening to watch their favorite show or just talk about their day. She encourages other stressed-out parents to remember to laugh. “Things will inevitably not go according to your plan, and it will happen at the worst times, but just roll with it.”

Former attorney Ashlee Veit also uses exercise to decompress. Her two kids, Louise and Conley, are now 4 and 2. The stay-at-home mom unwinds through her alone time. “Grab a few minutes for yourself whenever you can,” she urges other parents. “It might mean getting up a little earlier or staying up a little later than you normally would, but I find that it’s worth it.” Ashlee says she gets up early before the kids wake up so she has time to go on runs.

She enjoys quiet time and lounging on her back patio with a book by their pool. She says she recharges through her alone time, and also by hanging out with other adults (after being around her small children all day). “Swapping stories with parents in the same boat that you are can be really fun,” she says.