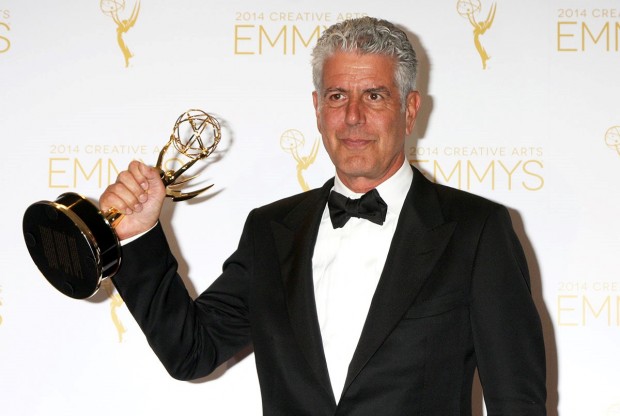 Anthony Bourdain was the host of Emmy and Peabody Award-winning “Parts Unknown,” which current airs on CNN and explores off-the-radar cuisines and cultures. (Photo: Shutterstock)

The man stood taller than his pictures, towering over me. His features were rough, wearied from too many late nights and smoke. Anthony Bourdain was wearing his signature black leather jacket on the corner of Milam in Houston, waiting for me to pick him up for an interview for the Houston Chronicle back in 2002.

I would spend the day with Bourdain, asking him questions, but never really getting to know him. How could I? I was in my 20s, still in culinary school, and I barely understood the inner workings of the world.

Also, the then-executive chef of French brasserie Les Halles didn’t let people in easily, even though on camera, it appeared otherwise. He admitted that he was a voyeur and a transient. He didn’t want to get too close because he and others come and go. “Do you remember that young chef I met earlier?” he asked me. “He asked if I would come by his place. I said ‘yes.’ I lied. I couldn’t say ‘no,’ not to his face, but he and I know I never will.

“He’s going to think that I’m a jerk,” he continued, then shrugged it off. We walked into Mai’s Restaurant and sat in a quiet corner. I needed a place that could hold Bourdain’s attention, so I picked my aunt-in-law’s restaurant.

It was his first time at Mai’s, but I was confident that my aunt-in-law would know what to serve. She brought out bò lá lốt -- grilled beef wrapped in betel leaf – and a few other grilled items. For dessert, she plopped down a gigantic fresh durian. I never knew how she got her hands on one. It wasn’t easily available at the time. Bourdain scooped up that creamy, stinky goodness and scarfed down every bite. I don’t think there was any left for me. He laughed. His face brightened up for the first time in the four hours I spent with him.

Years later, he would wax poetic about Mai’s, crediting a local newspaper person for introducing him to the restaurant. He couldn’t remember my name, but for him, that first visit to Mai’s  “will always be the taste of Houston -- the first, really authentic, ‘just-like-Saigon’ Vietnamese I’d had in America.”

Anthony Bourdain. Even though you might not think so, you will be missed dearly not by a few, but by many.

If you are struggling and need help, call the National Suicide Prevention Lifeline Phone Number at 1-800-273-8255. Locally, here's a list of hotline numbers covering Harris County and offering a wide variety of help.