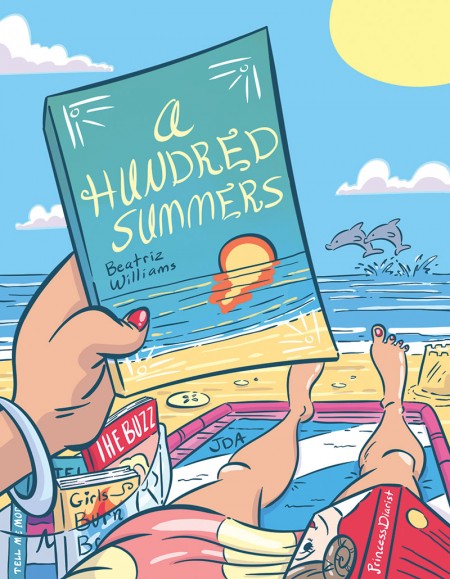 MAKING A LIST Local authors share their picks for what to read this summer, whether you're traveling or staying in Houston. (Illustration: behance.net/runamokstudios)

Summer, pull up a chair. We’ve been pining for your pool days and frosé and gearing up to read all the books that accumulated on our lists while we were taking care of more wintry things.

This year on the Back Porch, we’re excited about some local authors – Chris Cander, Katherine Center and Melanie Shankle – who’ve got us talking about their new releases. And they’ve joined the party to share their own summer reading lists.

To read more about the authors and their thoughts on books and writing, and to hear about their latest releases, see A Passion for Stories in this issue.

“This is a beautiful and tragic story of two women from a small Indian village who forge an unbreakable bond, following their geographical and psychological journeys into adulthood and their pursuit of reunion despite relentless obstacles. I was uplifted by the indelible power of their friendship.”

“A haunting Bildungsroman about a boy whose mother did undercover intelligence work during and after WWI. The novel's tone mimics the protagonist's coming-of-age, simple at the outset with increasing complexity toward the end. As with all of Ondaatje's work (think The English Patient), the characters are fascinating and the writing, exceptional.”

“This work of historical fiction chronicles the relationship between Hemingway and Martha Gellhorn, the renowned war correspondent he met while still married to his second wife. I'm a fan of McLain's beautiful, accessible writing and her strong female protagonists and think this might be her best endeavor yet.”

“I had a really fun time binge-listening to all of Carrie Fisher’s memoirs. She reads them and has a fantastic voice – it sounds like she’s just talking to you while you’re riding around in your car. They all have hilarious names; the first one is called The Princess Diarist. The story happened because she found her old diary from when they were filming Star Wars. It talked about the affair she had with Harrison Ford, that of course I was totally interested in. She can really read.”

“Trevor Noah, host of The Daily Show, is a comedian, but this book is a memoir about him growing up in South Africa under apartheid. His mother was black and father white. It was literally illegal for him to exist – his mother had to pretend that she was his nanny. He is a great writer.”

Everything Is Horrible and Wonderful: A Tragicomic Memoir of Genius, Heroin, Love, and Loss, Stephanie Wittels Wachs

“I’m about to read a book by another Houston author, Stephanie Wittels Wachs. Her brother was a TV writer who wrote for Parks & Recreation. He was a famous genius prodigy guy and wound up getting addicted to heroin and overdosing. Back in Houston, Stephanie had just had her first baby. She spent her first year raising her baby grieving the loss of her brother. The book got a huge amount of attention, and she is amazing. This is next on my list.”

Katherine adds, “There are a bunch more on my TBR (to be read) list.” A few: The Light We Lost, by Jill Santopolo; All We Ever Wanted, by Emily Giffin; One True Loves, by Taylor Jenkins Reid.

“Kelly is my absolute favorite author because she'll have me laughing one minute and crying the next.  This book about the 12 hardest things she's learning to say is full of wisdom and heart.”

“This is the perfect summer fiction book to read at the beach or by the pool.  It has it all – love, jealousy, intrigue and fabulous characters.”

The Royal We, Heather Cocks and Jessica Morgan

“The perfect book to get you in the mood for Prince Harry's wedding to Meghan Markle. This is basically their love story in fiction form. It's such a fun, light, great, beach-pool read.”

“If you need a little motivation to get off your couch and change your life, then this is the book for you. Rachel is funny and raw.  It will make you think about your life and the lies that you've told yourself that keep you down.”