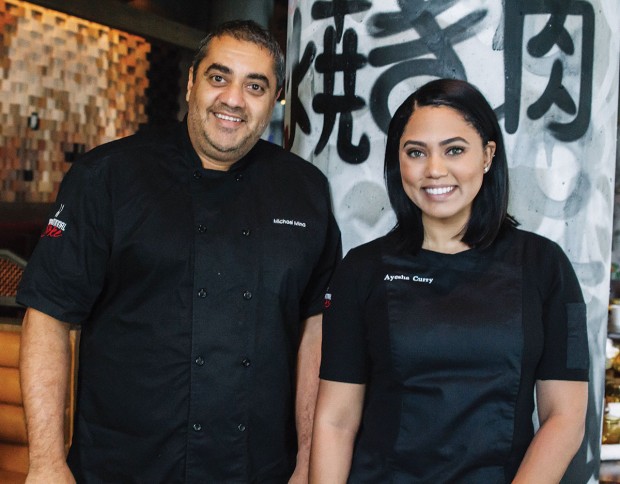 James Beard Award-winning chef Michael Mina can claim success across the country and in Dubai with 39 restaurants. The Mina Group – with seed money from tennis great Andre Agassi – has forged a restaurant empire with wide-ranging concepts, from classic French and rustic Italian to Japanese sushi and, recently, Mexican.

It’s an incredible achievement in a fickle, and often brutal, industry, but Cairo-born Mina – particular and meticulous in his approach – couldn’t have guessed how things would unfold, or that the 2018 NBA playoffs would threaten the rollout success of his latest venture: International Smoke in CityCentre. Last month, Mina opened the global and grilling concept in Houston with lifestyle guru and Instagram superstar Ayesha Curry. The Food Network star and cookbook author is married to Golden State Warriors point guard Stephen Curry. So, before International Smoke even opened, legions of unhappy Rockets fans gave it one-star Yelp reviews.

It got so flagrantly nasty that Yelp stepped in on June 20 to “clean up” and remove negative and positive posts that “appear to be motivated more by the news coverage itself than the reviewer’s personal” experience.

When asked about it, Mina’s cheery features darkened, but the cloud quickly passed, and the gregarious, 50-year-old chef flashed a rueful smile. “It was a double slap,” the San Francisco resident said, explaining that Hurricane Harvey delayed International Smoke’s opening by five months, then the Houston Rockets lost in the Western Conference Finals to the Golden State Warriors, who went on to win the NBA Championship. Houston morphed from the friendliest city to a bitter stew of hurtful Yelp and Facebook posts targeting the restaurant – and even Ayesha Curry, who gave birth to a boy two days before her eatery opened.

Here, Mina shared what happened during International Smoke’s grand-opening week, his favorite San Francisco restaurants, and why he invested in a Mexican cantina in Hawaii with Houston chef Hugo Ortega:

Your executive chef, E.J. Miller, is a local guy. He stressed that all your cooks are Houstonians and Rockets fans. He hoped that would win over the locals, along with delicious grub, of course. So, how was your grand opening?

I’m very passionate about sports, but I can’t imagine making my dinner decision based on that. The second night of our opening, we had 275 people come through, so that’s great. Knock on wood. That’s a good thing.

Houston is your second location. The original location is on Mission Street in San Francisco. How is that one doing?

It’s in a great space in San Francisco, too. We closed a very successful restaurant, RN74, which is unheard of, to open Smoke. It opened in August of last year, and it’s doing great. It’s insanity, really. Here we are, 11 months after opening, and it is still the hardest reservation to get in the city. We’ll do 500, 600 people a day.

We assumed – wrongfully – that International Smoke was about American barbecue, as in smoked briskets and ribs. Granted, you have barbecued pork ribs, but the rest of the menu looks like a travelogue of grilled and smoked flavors from around the world. You have grilled Sinaloa chicken from Mexico, cedar-smoked salmon from the Pacific Northwest, Argentinian wood-grilled steaks, Asian grilled redfish with garlic fried rice – and there is your Egyptian mother’s recipe for Punjabi-spiced fish fry with rice pilaf and cucumber raita.

My chefs and I used to talk about a restaurant like this, so it was always in the back of my mind. But with Ayesha, it came to the front because of her different ethnicities and heritage. You see that in her food, so we did a pop-up of International Smoke. It sold out in 18 minutes. In 18 minutes, we were sold out for three months.

You and Ayesha are opening International Smokes in San Diego and Miami, but what’s this about you opening a Mexican restaurant with our own hometown guy, Hugo Ortega – and in Hawaii, of all places?

Hugo is everything right about this industry. I can’t get enough of him. He’s magical. And yes, we were just in Hawaii. We just opened Mi Almita Cantina at the Street Food Hall (by Michael Mina) in Honolulu. Why? Because there is no good Mexican food in Honolulu. But our first full-blown restaurant will be in Los Angeles. The cantina has 90 seats. The one in L.A. will be 150 seats. It will have a tequila bar and will be a real showpiece.

That’s what I told Hugo. Obviously, Hugo is killing it in Houston, and I don’t know how close you are to Mexican food around the country, but Hugo can compete with anybody. He totally can. So, why not go to the heartland? Go to where you’re going to be pushed, and yes, it’s going to be tough. But he’s going to kill, and he’s going to make it. His food is that good.  If I even thought there was a question about it, I wouldn’t do it.

Ok, Michael, so where do you eat when in Houston, and what places should we check out in San Francisco?

All of Hugo’s restaurants, of course. Another favorite is Uchi (904 Westheimer). As for San Francisco, La Ciccia (291 30th Street). It’s Sardinian, and it’s really good. Order the wood-fired shellfish there. And if you’re in Chinatown, R&G Lounge (631 Kearny St.). That’s a good one. Order the pepper crab. It’s so good.