Cleaning up after camp 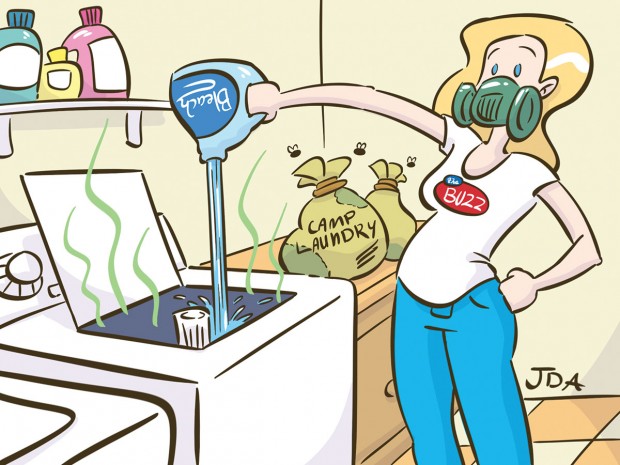 AFTER CAMP There’s nothing quite like the clean-up that has to happen when kids come home from camp, but happy campers make it all worth it. (Illustration: behance.net/runamokstudios)

It takes a special kind of scrubbing to clean kids and their gear when they emerge from summer camp. First the kids themselves come home, maybe after they’ve confided that they lost their toothpaste the first week of camp, but all’s okay because they’ve realized toothpaste is not really an everyday necessity. Right behind them comes their stuff: trunks and duffels literally exploding with musty T-shirts and towels, still-wet bathing suits, and, if you’re lucky enough to send your kids summering at the lake, sand.

I can smell the dank as I write, even though my girls’ camping years ended in 2016. Some things you don’t forget.

Like the travel soap dish I opened one year to reveal the telltale perfect etching of a Dove bird atop the bar of soap, just like it comes out of the box. Or the year – that would be every – that I popped my girls onto the kitchen counter after their second showers, feet dangling into the kitchen sink, veggie scrubber ready to go to work under their nails. (We did dispose of the scrubbers.) Or the time they both inexplicably picked up staph at camp, requiring everyone in the house to bathe in Clorox and also stuff antibacterial cream up our noses for a week or so.

I obviously missed some post-camp cleanup hacks somewhere. So I asked around.

Because this is 15-year-old Lauryn Kapiloff’s last year camping in Wisconsin, her mom Tracy admits to playing just a little dirty. “I purposely did not add any labels to her things this year. I told her, ‘Just don’t bring anything home that’s dirty or stained.’ I might need to write a note that she has permission to leave ratty tennis shoes or whatever. Bottom line, ‘Do whatever you can do to not have to bring extra duffels back home.’”

But if they do bring it all home, “Bleach the flip-flops,” is what Dinah Huthnance, a veteran mom of three campers – two boys and a girl – recommends. “I just put the flip-flops and the shower basket and the hair brush – all the stuff you can keep – in the washing machine on a heavy bleach cycle. I put a towel in so it doesn’t bang up the inside of my washer. Then I pull it all out and let it dry completely.” Once it’s all dry, Dinah vacuum-packs everything in those huge Ziploc bags you buy at Target. (Lifesavers, those bags, because not only do they keep gear together, but you can also compress the air out of them, making everything a lot flatter.) “I also place Bounce dryer sheets between each fold of the sheets and comforters, so everything smells fresh until the next year. And it’s wonderful because next year you don’t have to do anything but pack it up.”

After eight years of sending two girls to two camps, Shari Frankel endorses the full-on wash-and-fold. “I bring it all straight in the suitcases to the washateria,” she says. “I sort out all the stuff that’s not washable and bring it home. They weigh the rest, wash it and fold it, and I don’t have any sleeping bags breaking my washer or not drying properly. It costs less than maybe $100, and it’s done. The dirty clothes, the sand, even bugs – they never even enter my house.”

A friend who asked for anonymity in order to not implicate her sons’ camp remembers one year’s party favor: Bedbugs. “The camp never called to tell us they had it,” she says. “The only way we knew was because the boys had bites all over their bodies. After we realized, one of the moms bagged everything up in dark garbage bags and put them in the back of her car and drove around with them in the heat for several days to kill the bugs because that’s what she read to do on the internet. She said, ‘If I had known, I would have rented a trailer to go home!’”

After that, the same mom says, “I wash everything that comes home, even the clothes that have been washed and Saran-wrapped at camp. Even the towels that haven’t been used. All of it. I take everything straight to the laundry room and make piles taller than my waist and start washing. Then I put it all back in the camp duffels and store it, and then wash it all again before I pack them the next year.”

One last suggestion from an anonymous parent: “I usually have it all shipped home while we’re on family vacation!”