Island favorites from the past 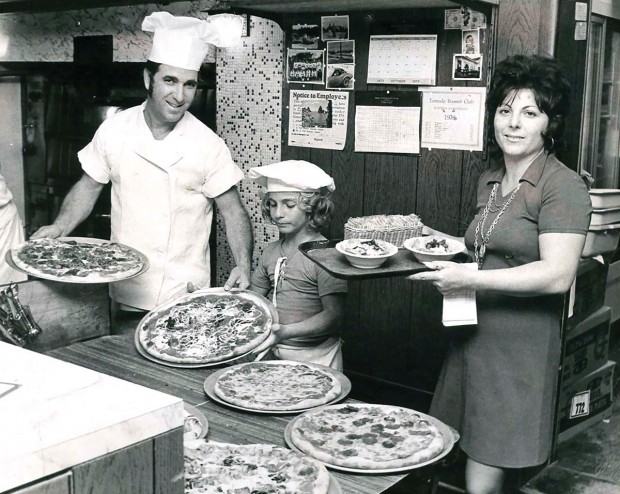 Driving south on I-45 to Galveston for a quick getaway remains a favorite road trip from Houston. While sand and surf are attractions, Galveston’s dining scene always has been a big part of the island experience.

Here, we take a look back at historic Galveston restaurants from times past. We know these names will spark some memories.

Throughout the 20th century, the Port of Galveston was the gateway for tens of thousands of immigrants to the United States. While some proceeded to other destinations across the country, countless stayed in Galveston to start new lives. Many opened restaurants serving their favorite family recipes.

The Smecca family has maintained a presence in the Galveston dining arena for decades. Sicilian-born Giovanni Smecca came to Galveston in 1967 with aspirations of becoming a professional fisherman. When that didn’t work out, he teamed with a friend to serve “pizza pie” on Galveston Island, opening Mario’s Flying Pizza, currently located at 2202 61st St. and in Pirates Beach. Giovanni continues to remain a fixture at his restaurants.

His brother, Tony Smecca, a Sicilian raised in Gela, Sicily, eventually settled in Galveston in 1973 with his wife and sons, Johnny and Joey. Tony made his own mark on the Galveston restaurant scene with Mario’s Seawall Italian Restaurant. The pasta dishes have an authentic New York flavor, and hand-tossed pizza has always been an attraction, but their classic spaghetti started it all. Mario’s is located on Seawall Boulevard at 7th Street with views of the Gulf of Mexico. While Tony Smecca passed away in 2015, his sons and their partners carry on the tradition as Galveston Restaurant Group, which includes sushi, steaks, seafood, pizza and Italian restaurants.

Longtime Galvestonians may recall a Greek immigrant named Theodore Christie, later referred to as “Old Man Christie” by patrons, who arrived on the island in 1917 from New York City. Christie, distinguished looking with gray hair and wire-framed glasses, opened a food stand selling fried-fish sandwiches in Galveston. This small establishment, known as Christie’s, became a hit. Christie’s Famous Trout Sandwich put them on the map. Served with julienne potatoes and tartar sauce for 25 cents, it was prominently displayed at the top of an early 1930s menu. Another favorite was the fried shrimp platter with tartar sauce, a signature dish. For the meat-lovers, there were Kansas City sirloin steaks and hamburgers. 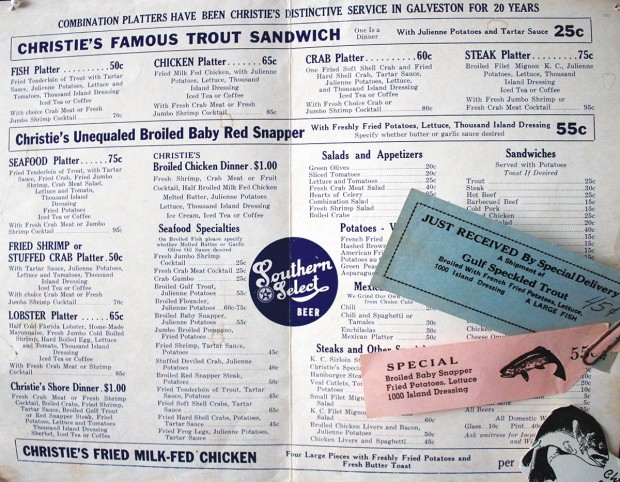 Christie’s Seafood was originally located on the bottom floor of The Tremont, but eventually relocated to Houston near the Texas Medical Center in 1934. Granddaughter Maria Christie said recently, “While others later utilized the Christie’s name in Galveston..., no other family-owned Christie’s remained on the island after relocating to Houston.” Theodore Christie passed away in 1968, but Christie’s still serves up seafood at 6027 Westheimer Road in Houston, run by a new generation.

Former Galvestonian and current Buzz-area resident Gerilyn Farb Gordon has her own old favorites from the island. “The first place I ever had pizza was at Giusti’s on Seawall Boulevard. We would always order cheese pizza or pepperoni. I don’t think we knew that pepperoni wasn’t kosher. It was always such a treat to go to Giusti’s.” Giusti’s Café (pronounced Joosty’s) at 828 Seawall Boulevard, operated by John Giusti, opened its doors on Galveston Island during the 1940s. Specializing in pizza pies, Giusti’s served traditional Italian dishes including lasagna. This beachfront café was popular with local residents as well as island tourists until closing down in the middle 1960s. A vacant lot exists where Giusti’s once operated.

Gerilyn also remembers John’s Oyster Resort and how it was always crowded each time they visited. The island seafood favorite was located at 7711 Broadway overlooking Ofatts Bayou just south of the causeway. Owned by the Celli family, John’s was always packed with locals and visitors from Houston.  “We would go there for dinner every Sunday night, and after we finished our meal, we would walk down to the water behind the restaurant.” Fried shrimp was Gerilyn’s favorite, while her brother enjoyed the fried tenderloin of trout. “Mr. Celli would come through and talk to everyone. He was very friendly.”

John’s offered indoor dining, but a coveted spot on the back porch overlooking the water was the best seat in the house. Built in 1917 near a terminal of the Interurban (a train that linked Galveston to Houston), John’s closed in the late 1980s. The building later became Immanuel Baptist Church. The white stucco and green accents were painted pink once the church took over. The building, which had been vacant for many years, was eventually demolished in 2009. A newer steakhouse, Number 13 Prime Steak and Seafood, stands near where the original John’s Oyster Resort once served Galveston.

During the 1950s and 1960s, most of the hotels on Galveston Island were motor hotels, where a visitor could drive up and park right outside the door to their room. Doors opened up to parking lots, the pool area or walkway balconies along the second or third floors. One of the more prominent places to stay during this time was The Jack Tar. Guests splashed around in their kidney-shaped swimming pool, with a bridge crossing the resort-like setting. This mid-century playground located on Seawall Boulevard at 6th Street was across the street from Stewart Beach.

The Jack Tar had various restaurants and clubs, including The Coffee Cove, which opened in 1949. The cafeteria-style room was open 24 hours a day. While some would stop in for a cup of coffee, many hotel guests and locals would grab a bite after being out on the town, enjoying everything from burgers to chili, according to a May 2004 article by Victor Lang from the regional online newspaper, The Guidry News. Later, in 1968, the after-midnight crowd had to find another hangout, as The Jack Tar was sold. It became a part of Galveston history for good in 1973 when the property was demolished to make way for the Emerald Condominiums, now known as Emerald by the Sea.

A walk down the island’s memory lane must include Gaido’s. This venerable dining establishment, located at 3828 Seawall Boulevard, has been serving Galveston for over a century. Fried shrimp and ketchup kept many a kid, including me, happy while their parents lingered. Waiters in white jackets would sprint to the table with stainless trays of crackers and butter for us to snack on while we waited for our meal to be served. My parents would always order baked potatoes, and I marveled at the carousel of condiments our server brought out as toppings for those potatoes.

Italian immigrant San Giacinto Gaido operated on a straight-forward directive when he first opened Galdo’s doors in 1911. He made it a point to learn what diners wanted to eat and then served it. At the current location since the 1940s, where windows overlook the Gulf, walls of memorabilia tell their story and document the history of Gaido’s, the fourth generation of the Gaido family maintains Mr. Gaido’s simple, effective approach.

The original location was actually on the beach at Murdoch’s Bathhouse just down the street at 2115 Seawall Boulevard. Gaido’s has always relied on the Gulf of Mexico for the daily catch. Today’s Gaido’s is easily identifiable by a gigantic fiberglass crab that has adorned the entrance since 1960.

Editor’s note: This is just a sampling of restaurants from Galveston’s dining past. We’d love to hear about the ones you remember. Comment under this story at thebuzzmagazines.com or email [email protected].