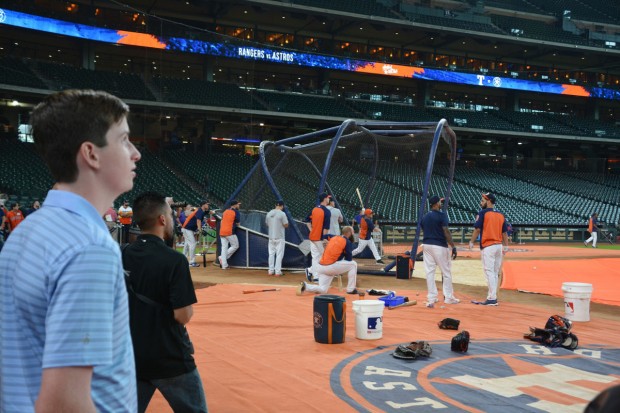 Strake Jesuit College Preparatory student Kevin McKenna, who's a School Buzz correspondent for The Buzz and is a passionate sports fan, came to The Buzz with an idea to cover Houston professional sports teams. He attended the Astros-Rangers game on Friday, July 27 and shares his experience and thoughts about the Lone Star Series here.

On July 27, the Houston Astros started their three-game series against the Texas Rangers, bringing to a close the 18th year of the Silver Boot Series between Major League Baseball’s two Texas teams. Although the Astros lost the series, things look very positive these days for Houston sports teams compared to its Dallas counterparts. 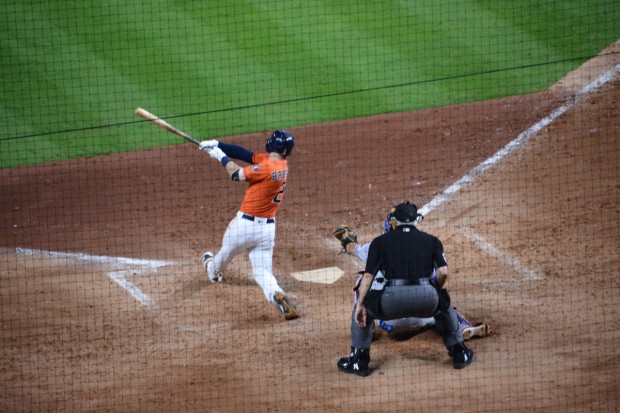 Alex Bregman (pictured, at bat), who won the American League Player of the Month in June, signed autographs for countless fans after taking batting practice at the series opener against the Rangers.

It seems crazy to think that earlier this decade Houston stadiums were being overtaken by fans rooting for Dallas teams. This change came after a run of Dallas sports successes, with the Rangers making back-to-back World Series in 2010 and 2011 and the Dirk Nowitzki-led Mavericks winning the 2011 NBA Championship.

During that same time, the Astros were losing 100 games a year and the Rockets were not making the playoffs. As a result, Houston’s crowds for Dallas games started to be filled with fans wearing Dallas jerseys and rooting against the home team.

Thankfully, times have changed. Houston’s teams have rebounded in a big way, and its fans have responded with tremendous enthusiasm. 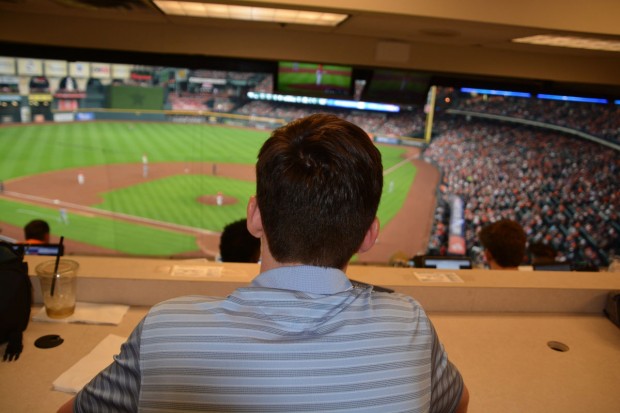 Kevin McKenna's view from the press box at the July 27 Astros-Rangers game.

Houston’s climb back to the top reached its peak with the Astros winning last year’s World Series, and the Astros are one of the favorites again this year heading down the stretch. The Astros’ All-Star roster features Jose Altuve, Justin Verlander and Alex Bregman, while the Rockets’ one-two punch of James Harden and Chris Paul guided the team to an NBA-leading franchise record 65 wins as well as one victory away from making this year’s NBA Finals.

Beyond the winning, the Astros players have shown a desire to connect with their fans. Bregman, who won the American League Player of the Month in June, signed autographs for countless fans after taking batting practice at the series opener against the Rangers. Altuve, who missed the Rangers series with a knee injury, also came out of the team’s clubhouse to interact with fans and sign autographs.

An Astros lineup missing Altuve, Carlos Correa and Brian McCann to injuries scored just two runs, with one coming on Evan Gattis’ 20th home run of the season. Dallas Keuchel was the losing pitcher, which ended his streak of five straight wins. 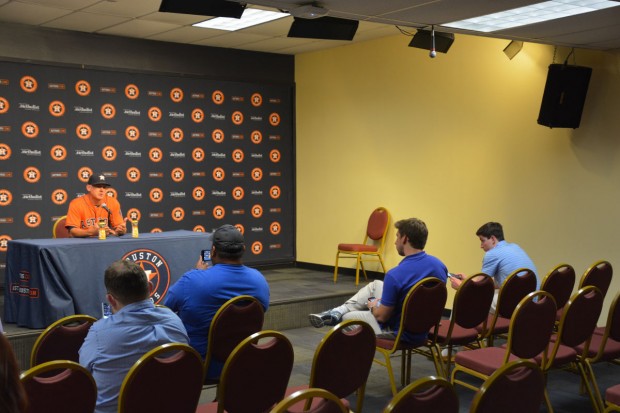 A.J. Hinch addresses the media after the game. Kevin McKenna (pictured on the right) enjoyed the opportunity to attend the press conference after the July 27 Astros-Rangers game.

“I love watching our World Series Champion Astros, so it hurts to see us lose,” said Parks Dagley, a sophomore at Lamar High School. “But losing to Dallas makes it hurt even more.”

In the NFL, the Texans and Cowboys only play each other once every four years, which makes it hard for a rivalry to develop. Of course, one of the Texans’ most memorable games was when they became the second expansion team in NFL history open with a win, upsetting Dallas 19-10 on Sept. 8, 2002. Since then, the Cowboys have won three straight vs Houston. Deshaun Watson and the Texans host Dallas this Oct. 7 at NRG Stadium.

With plenty of stars on the Astros, Rockets and Texans, this is a good time to be a Houston sports fan in the city’s longstanding rivalry with Dallas.