From Houston to Guatemala, with love 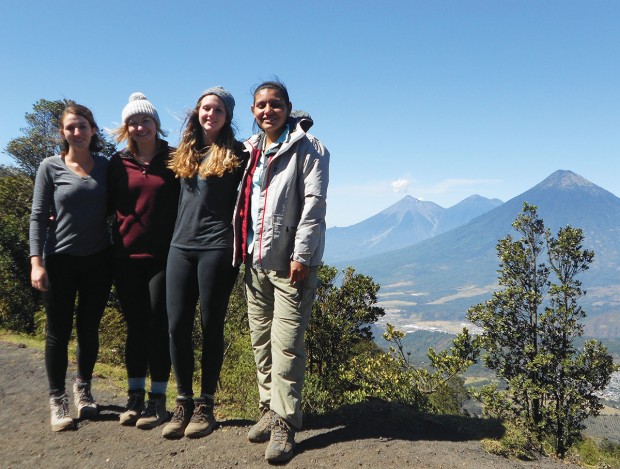 A personal note: When Charleene Burgess contacted The Buzz staff about a volcano-trekking trip her daughters had taken to Guatemala, and the way that trip had motivated them to support victims of the disastrous June 3 eruption of the Fuego Volcano, it hit home for me. That’s because eight years ago, I climbed that volcano myself.

I witnessed a different natural disaster on that trip – Tropical Storm Agatha – which ended up killing over 200 and causing over $1 billion in damages. Like their friend Lorena, who has family in Guatemala and went to help after the Fuego eruption, I saw the devastation and poverty. And like Lorena, I saw the tremendous spirit of solidarity and kindness of the Guatemalan people, who risked their lives and shared what little they had to help neighbors – the same inspiring spirit that has arisen in Houston every time a hurricane hits. So today I share a different kind of travel story – one of giving back to a destination that touches one’s heart.

Hayley and Brooke Burgess have been friends with Lorena Valle since Bellaire High School, where they played together on the volleyball team. When Lorena went to visit family in her parents’ native country of Guatemala, she climbed one of the country’s famous volcanoes and posted photos of herself on the summit.

Hayley and Brooke saw the photos and decided they wanted to climb a volcano, too – and last winter, the girls all flew down to Guatemala together and made the trek up Volcán Pacaya. It was an eye-opening trip, with a fascinating glimpse into another culture and an exhilarating trek up one of the country’s most iconic volcanos.

“It was hot enough that there was a hole dug where you could roast marshmallows,” recalls Hayley. Even then she received a poignant message of the power of the volcanos; the one they were scheduled to climb had just made headlines with the death of five hikers who lost the trail in the thick clouds and died of hypothermia.

But it would be many months later before the true power of those volcanoes would be brought home. In the background of one of their photos looms the Fuego Volcano, whose deadly eruption on June 3 left over 100 people dead and thousands homeless.

The news of the eruption hit close to home for Hayley, who thought of the hospitality of the people she met in Guatemala. When her mother read in the newspaper that six of the youngest burn victims were being treated at the Shriners Hospital for Children in Galveston, Hayley had an idea. “I wanted to help in any way I could to make them feel more welcome,” she said.

She and Lorena ended up putting together a set of “comfort packages” for the kids in the burn unit and their families. A couple of weeks after the volcano, Lorena headed to Guatemala herself to spend time with the family and see what could be done to help. One of her aunts has been working closely with the relief efforts, as has a cousin who is a medical student.

“It really reminded me of the situation we went through with Hurricane Harvey,” she said after her return. “It’s a lot of people displaced, but it’s been awesome to see that regardless of the political situation in Guatemala, regardless of the lack of money from the population as a whole, everyone has come together to help each other. So that sense of community really did kind of give me flashbacks to what we went through last year.”

A charity has been coordinating a significant relief effort, but resources are falling short, said Lorena. “They have 2,800 people without a home right now in a country that’s already experiencing extreme poverty, and it’s sad to see. I really hope people will help because they need it.”

Beyond hoping, Lorena has organized a fundraiser to support the community-based organizations that her aunt is working with. The donations will go to TECHO-Guatemala (they buy materials and build homes for the homeless; “techo” means roof) and Fundación de Niños Quemados de Guatemala (for children who were burn victims).

Charleene was also touched by the connection between her girls and Lorena’s trek and the subsequent eruption. “Travel makes it a smaller world,” she reflected. “And it helps us care for each other in need.”

Shriners Hospital for Children: Galveston is no longer accepting physical donations for the volcano victims, but your monetary donations will help assure their care and that of other needy children.