Lens on the Hill Country 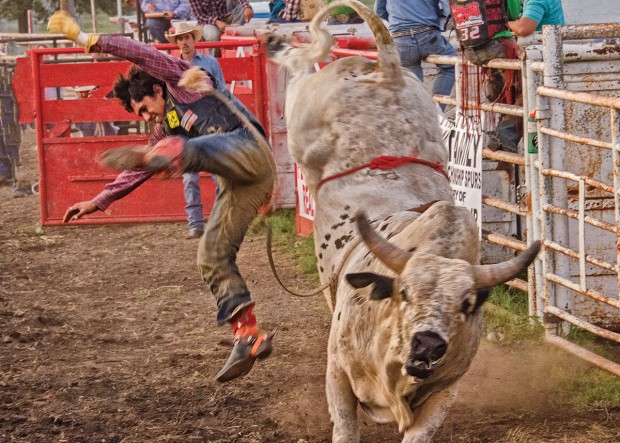 Mike Marvins was only a year old when he went on his first Hill Country jaunt. He doesn’t remember that first visit, but he will never forget his second. He was 10 when his parents, Sonia and Kaye Marvins, changed his life by sending him to a summer camp near Wimberley.

“The first time I went to the Hill Country, I had never been out in the woods. I had never ridden a horse, I had never been swimming in a river, and never slept out under the stars or seen animals and critters in the wild. But after a nearly (in those days) seven-hour bus ride from Houston,... within 45 minutes of arrival we were swimming in the cold, clear Blanco River. For me, it was life changing.”

His family was just following a time-honored Houston tradition. 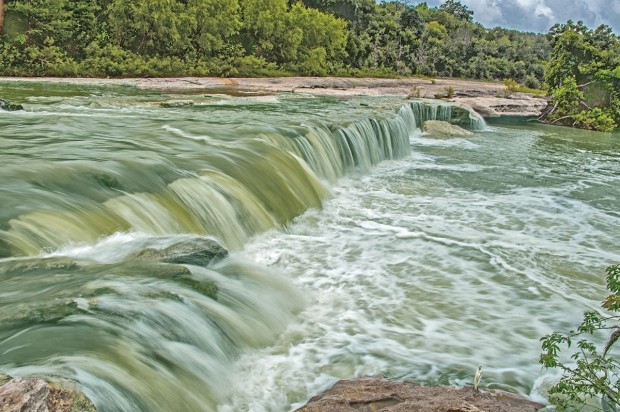 “The summer camps began in the 1920s,” said Marvins, who would come to know the Hill Country inside and out in the years ahead. “In Houston it was hot, humid and full of mosquitoes, and the wealthier families would buy ranches or build homes up in the Hill Country, where it was cooler and there were beautiful rivers to swim in. The summer camps and a lot of those families have been there for four generations.”

Marvins, a fourth-generation professional photographer and author, has distilled his accumulated years of wanderings in an upcoming book, The Texas Hill Country: A Photographic Adventure, with all Marvins’ proceeds to benefit the Texas Parks and Wildlife Foundation. Marvins agreed to give a sneak preview to Buzz readers (all photos in this article are from his book).

Eager to find a way to extend his connection to the Hill Country when his years at camp came to an end, he became a camp counselor at 16. 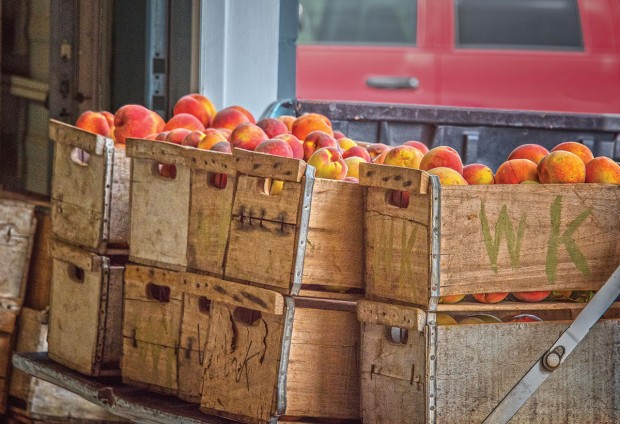 “On the weekends when they were changing over the campers, the staff would take off and explore all the backroads,” he recalls. “We would just sleep out under the stars; we didn’t have any camping equipment or any money. We’d just take our blankets and a bunch of food and head out in our cars and go to all these places that are famous today.”

“There were mandatory stops at our favorite beer gardens for a Shiner and sausage. No ID checks then. And there were those good German bakeries in Fredericksburg and New Braunfels. Swimming in Wimberley’s famous and frigid Blue Hole and Jacob’s Well were a must. Long weekends carried us to the legendary Saturday night dances at Garner State Park or concerts in Gruene or a game of nine-pin bowling at Fischer Store. Everything was still there and is in the book.”

Later on, after he graduated from college and finished his service in the army, he came back to Houston and served as a scout leader, taking the boys up to the Hill Country every chance he got, even in the winter, to camp out. And, as a photographer, the Texas Professional Photographers Association gave him another excuse to head for the hills with its annual convention in the Hill Country. 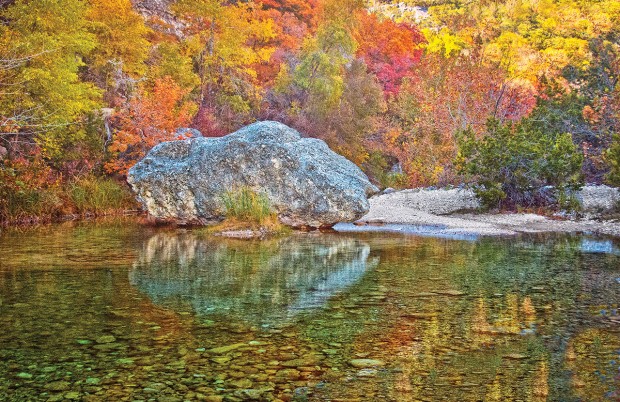 But his long love affair with the region was only that – until Hurricane Ike finally pushed him to make a commitment.

“My son, Casey, went to camp in the Hill Country. And even though it was off season, his camp called and said anyone who wanted to evacuate Houston was welcome to come up and stay,” he recalls. “My wife and I looked at each other – and we didn’t go, but we said: ‘You know what, we’re going to either buy or build a house in the Hill Country.’”

And 12 years ago, they did just that, on a beautiful stretch of the Guadalupe River, right in the middle of his old stomping grounds between Hunt and Ingram. It’s only a mile and a half from the place his mother stayed when he was a year old. The location couldn’t be more convenient, he says, just 45 minutes from Concan and Garner State Park, 25 minutes from Fredericksburg and 30 minutes from Bandera. 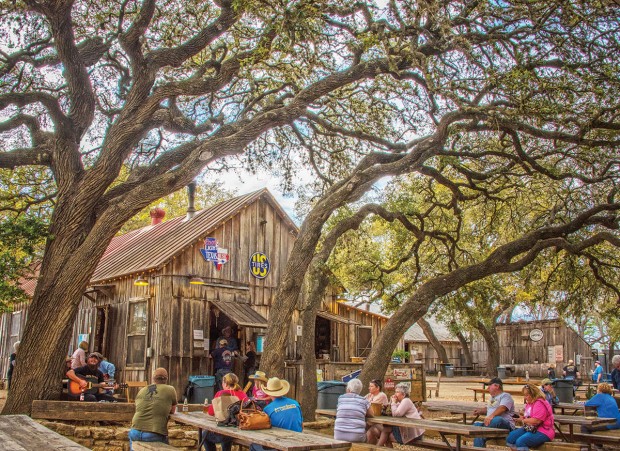 “It’s really neat – we’ll say, oh, let’s go to Bandera for dinner and a rodeo tonight. It’s just as easy as getting across Houston. You just have to be sure you don’t hit a deer on the way back.”

Now he and his wife, Mickey, stay all summer and other times throughout the rest of the year, exploring the backroads and little towns, attending county fairs, rodeos, dance halls and festivals and a whole range of events and places that many people don’t even know exist. Mike’s new book shares those places and experiences with readers and invites them to take their own journeys.

The idea for the book came from a trip down one of those byroads, when he went to look in on the camp he attended as a child. “I knew it had been sold many years ago, but I went by to see the place where it had been,” he recalled. “It was now a small development, but the river was just like it was many, many years ago when I first saw it. That’s when I decided to go back and photograph all the places that I’d gone to when I was a teenager. Surprisingly, many of the places were still the same – and some were much better. Best of all, the beauty and serenity of the Hill Country is still there to enjoy.” 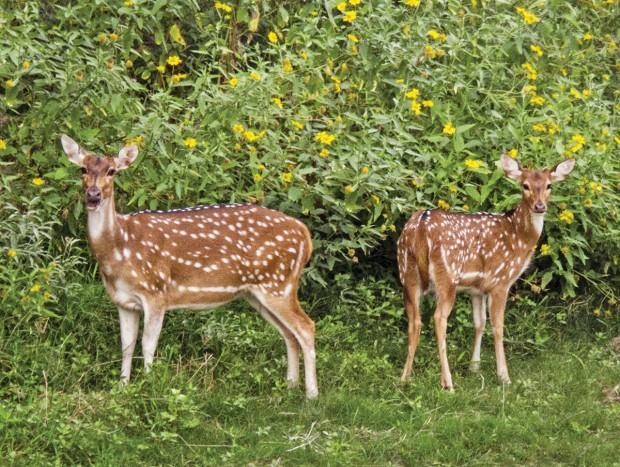 Asked his photographer’s advice for taking pictures in the Hill Country, Mike says he photographs whatever catches his eye.

“Even if I go to the same places time and time again – Fredericksburg, Concan, Kerrville, a rodeo or my favorite state park – I stop and look around and see what’s going on. That includes not only the whole scene but the small, beautiful details as well. You will see a lot of that in the Hill Country book.  A quote by photographer Paul Caponigro that I always have in the back of my mind says it all: ‘The key is to let the camera reveal not just what the eye picks up but what the heart picks up as well.’”

Get off of your own beaten trail, he suggests; take the time to explore some new destinations, and all the spaces in between. 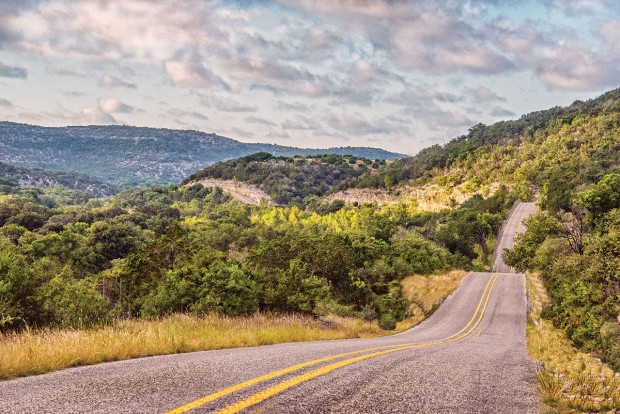 Another tip is to go during different seasons; most people tend to go during the summer, but each of the seasons has its own charm – spring with its burst of wildflowers, fall with the changing colors, winter with the Trail of Lights, the Hill Country’s name for the extravagant bursts of holiday cheer in each town throughout the region. And all year round, festivals and events without end – easily found on websites like hillcountryportal.com or texashillcountry.com, or, better yet, the websites of the towns themselves.

“What Mickey and I do the most is just drive around,” he said. “There are just a few major roads in the Hill Country; I-10 goes through, but it really skirts all the towns. Once you get off 1-10 on those little backroads, all the original little German farm roads, that’s where you see all the amazing scenery and rivers, old farm houses, stone fences and even exotic wildlife from Africa and Asia.”

Plus, he added, there are country cafes, dozens of wineries, antique stores, and scores of old historic markers. 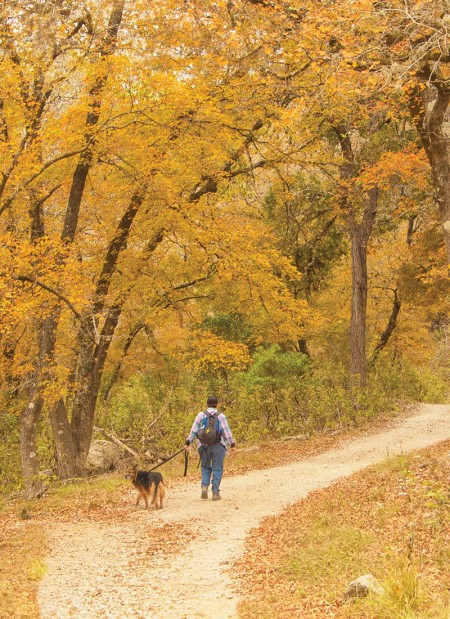 “The Hill Country was one of the first places in the country where they brought exotics over from Africa and Asia for hunting purposes,” he said. “You can be on the backroads and see zebras and all kinds of antelopes – they’re all fenced in, but they’re still all over the place.”

He was riding around a few months ago, he said, looking for a good sunrise, and was amazed to see a magnificent herd of at least 75 Axis deer peacefully grazing in a field. That photograph, of course, is in the book.

Most of the book was just born of serendipitous rambling. But one theme kept coming up that inspired some deeper digging, and that was the story of the original German settlers, whose descendants still populate the region by the thousands. In making photographs, he’d start talking with the residents and find that their great-great-grandparents were among the first Europeans to settle those lands, and that they were basically pioneers – German settlers fleeing civil war and persecution at a time when Germany’s aristocracy was resisting any serious reform.

This early German settlement has shaped the character of the Hill Country in some colorful and surprisingly authentic ways. Many of the communities founded by the German settlers in the 1850s are still intact and thriving – not just Fredericksburg and New Braunfels but Comfort, with its one hundred-plus historic buildings, and Luckenbach, the “Texas Outlaw Music capital of the world.”

The Texas Hill Country: A Photographic Adventure is due for release on Oct. 11 by Texas A&M Press. The book launch is Oct. 25 at the Kerr Arts and Cultural Center in Kerrville. On Oct. 27-28 he will be signing books at the Texas Book Festival on the Capitol grounds in Austin. It will be in bookstores and can be preordered now (mikemarvins.com).

The book, which includes contributions by Houston Chronicle columnist and editorial writer Joe Holley and the Harry Ransom Center’s Roy Flukinger, will undoubtedly bring back memories for many and inspire travel plans for many more. So now it’s time to grab your own camera, head for the hills and make some memories of your own.