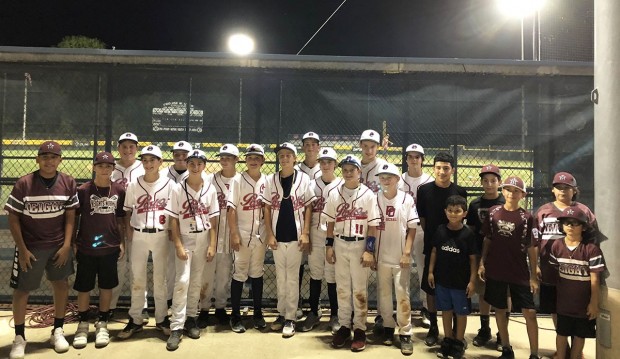 Players from Post Oak Little League celebrate with players from Norhill Heights Little League from Section 3, who were among the many fans supporting POLL in Saturday night’s game against Mississippi, in which POLL won.

Post Oak Little League is one step closer to making it to the Little League World Series after a 16-4 victory against Franklin County Little League on Saturday night in Waco, Texas. In Game 2 of the Southwestern Region Tournament, POLL, known as Texas East in this tournament, defeated Mississippi in the fifth inning after hitting the run rule. The rule is a 15 run-lead after three innings or 10 run-lead after four or five innings.

The 12U All Stars started the game strong with Kaleb Rook having a scoreless inning, followed by Ryan Selvaggi and George Kugle each pitching an inning, and Richie Klosek closing the last two innings. Ryan Selvaggi hit a two-run homerun in the second inning and Kaleb Rook led the team with three hits.

Team manager David Rook is extremely proud of the success of this team so far. “The win [Saturday] night keeps us on track to reach another goal of ours, which is winning the SW Region and representing SW Region and Post Oak LL in the LLWS. It is a huge accomplishment to continue winning and honor to coach the boys and represent our community so well. We have a lot of support in Waco this week with friends and families here as well as watch parties in and around Tanglewood, Briargrove, Memorial, etc.,” he said.

Post Oak Little League is now just two games away from advancing to the Little League World Series in Williamsport, Pennsylvania, which is set to begin on Aug. 16.

Post Oak Little League will play Oklahoma tonight at 8 p.m. on ESPN2. Check your local listings for further information about watching the game.

You can also stay updated with the Southwestern Region Tournament bracket here.

9:00 am to 10:00 am
Location:
Discovery Green
END_OF_DOCUMENT_TOKEN_TO_BE_REPLACED