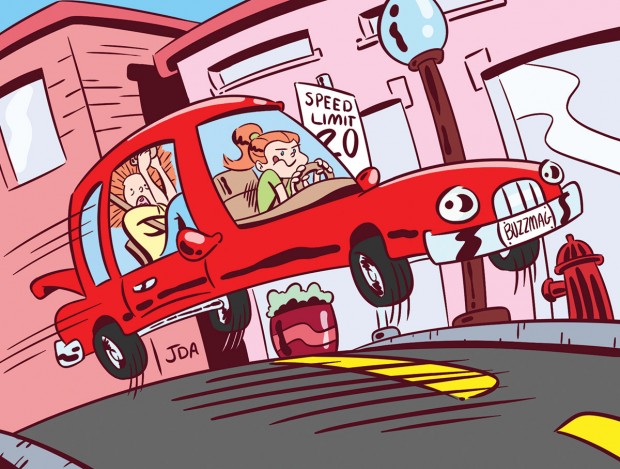 HANG ON Riding in the car with student drivers – especially when they're your own children – isn't for the faint of heart. (Illustration: behance.net/runamokstudios)

Imagine locking yourself into a moving car surrounded by other moving cars and myriad perilous objects (curbs, trees, people) without control over said car’s speed, direction or ability to stop, with no escape. If you can truly transport yourself to this place without hyperventilating, can you please come log some driving hours with my 15-year-old permit-driver?

I’m taking a risk here talking about this situation. If and when my new driver reads this, I might not be doing much talking at all, especially with my child.

Because that’s the way this thing has been going. My sweet baby – the one who promised me more than a few times that she would never be that teenager and would always let me kiss her cheeks and hold her hand – does not like it one bit when she looks over from the driver’s seat to find me holding on to the window, positioned to escape. How does she even see that happening? Because I myself have no idea it’s happening – somehow I just find my hands plastered to the window, which, sadly, is pretty smooth and is really not the most comforting thing to hold onto.

In part I need to breathe – or merely remind myself to force an exhale – just to survive the ride. But another part of my exaggerated breathing is to do my very best to be calm and keep smiling as my sweet baby tells me to stop getting crazy nervous “right now” and it makes everyone else crazy and how is she supposed to drive when I act like this and why didn’t I do this with her sister? Then her eyes get very big.

This isn’t my first go-round; it’s my second child learning to drive. I can’t tell you I didn’t have my moments with the first one. Those passenger-side curbs and anyone walking anywhere near them were fairly alarming. But why is this one somehow harder? Is it because every time she gets in the driver’s seat she has to remind herself out loud which pedal is gas and which is brake, followed straightaway by a turning both ways – all the way – of the steering wheel to be sure it’s centered? (If you’re confused, don’t worry. So am I.) Or is it that I have to continuously remind her, not without a little panicking on my part, to “turn the wheel the other way” mid-journey?

Or is it just because she’s the baby, and she’s really not supposed to be doing this. (Note the period here: This is not a question.)

I know for a fact I’m no worse than any other middle-aged parent trying to let go. The other day, I was on speakerphone with a friend whose 15-year-old daughter was practicing driving during our conversation. All was calm until, mid-sentence with me, my friend abruptly yelled, “Maddie, what the *@#! are you doing??? Did you not see that car coming? What in the world? You idiot!” The three of us quickly laughed it off, everyone thankfully safe. But she said it.

If we all survive this phase without 1) someone accosting someone else, 2) seriously hurt feelings, and/or 3) totaling a car, and if we’re still speaking – better yet, laughing – when we drive to DPS to get the real license, we will have done our jobs. We’ll get to dust ourselves off and dive into the next thing, whatever that is.

But right now, I can’t go there. The thing is, I’ve survived turns into the wrong lanes, missed stop signs and so many other moments of sheer terror. I’ve whimpered, I’ve gasped, I’ve even (please don’t tell) closed my eyes a few times and said a prayer just to get through it. And every time, my sweet driver looks sideways at me with her giant green eyes, like I’ve not only lost my mind and have no idea what I am screeching about, but also like she can not believe what a complete control freak I am, and why can’t I just chill out a little?

Well, here’s the answer: Eventually – and this is contingent on whether she actually does get the difference between the brake and the gas – I’ll let her drive, on her own, without me keeping us safe by pumping the invisible brake on the passenger side. But even when she’s out there on her own, likely fully capable and careful, I’ll probably never chill out the way she’d like for me to. Because even with a driver’s license, that’s still my baby behind the wheel.