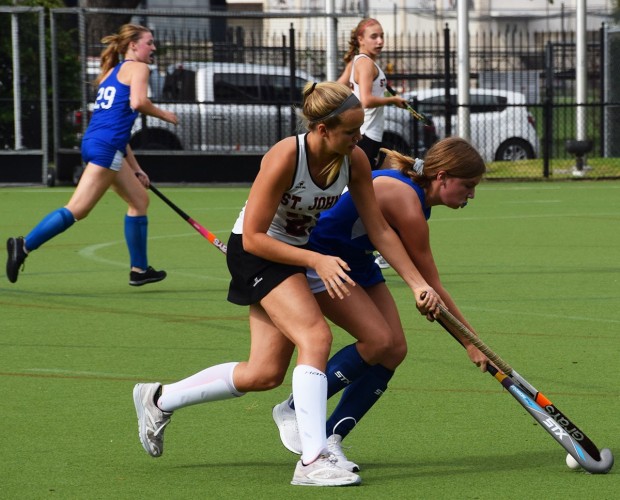 Caroline Pressler fights for the ball against an Episcopal player. (Photo: Alex Williams)

Coming off an undefeated season and as the reigning city champs, the St. John’s JV1 girls field hockey team has a lot riding on the upcoming season. With all eyes on the Mavericks and a roster consisting of primarily new players, the team is looking to take a different approach this year in order to secure another championship.

During preseason, it became evident that the two main focal points revolved around fitness and team building, which were tested in the scorching heat. With feels-like temperatures exceeding 110 degrees Fahrenheit, the name of the game was hydration. Athletes relied on the St. John’s training staff to provide advice and aid at all times as they ensured the safety of players. The Mavericks ran sprints, suicides and power miles in addition to doing countless situps, pushups and burpees in order to prepare for the upcoming season.

All their hard work seems to be paying off. At their home opener against Kinkaid, their main rivals, the Mavericks dominated the game, shutting out the Falcons with a score of 3-0. Ella Kalapatapu, a sophomore and defender, had to say this about the Mavs performance on Tuesday night, “It was great to start out the season with a win, especially against a huge rival. The energy on the field and sidelines was positive, and we were really connecting as a team. It didn’t seem like it was our first time playing together.”

The Mavs took on the undefeated Episcopal Knights at home the following week. With plenty of practice, the team felt confident heading into the game, and it showed on the field as they beat the Knights 8-1. The next step for the Mavs is the game against Memorial Varsity. A win against a varsity team would be a true testament to the girl’s hard work and dedication. With wins against the Falcons, Knights and Mustangs, the JV1 girls field hockey team will be one step closer to defending their title and taking home the trophy for a second year in a row.