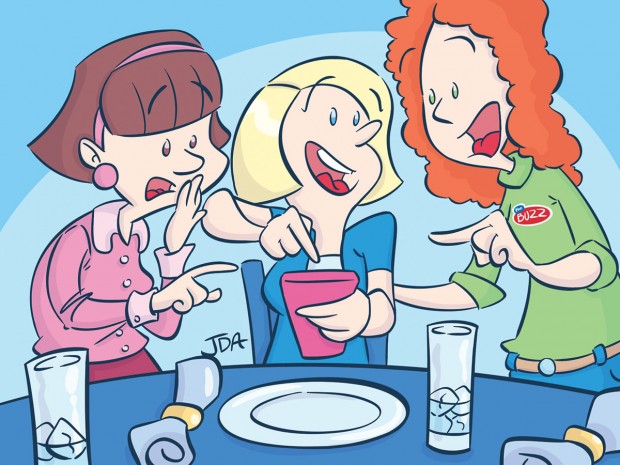 DOWN THE RABBIT HOLE Facebook is like a modern-day nosy neighbor. The social media app makes it all too easy to spend too much time checking out what everyone's up to. (Illustration: behance.net/runamokstudios)

I never really cared about social media. Sure, I had heard of profiles and “friends,” but it just didn’t interest me. I was preoccupied with preschools and playdates, and Facebook was one more thing I didn’t want to figure out.

Then I went to a high school reunion. It was about 10 years ago, and Facebook was just beginning to become mainstream. Suddenly, old friends I hadn’t seen in years were connecting online. I got sucked right in.

It was fun finding people and watching their kids grow up hundreds of miles away. We all laughed about the awesomeness and the time drain of Facebook. But the only time we’d indulge was at home, in front of our computers. And then came the Facebook app.

Now, if a friend is talking about someone who I can’t place, they pull out their phone and show me a picture. Of course I know her! Or if someone heard about a marriage or a divorce or a move, but there aren’t clear facts, we rush to Facebook for clues. Where is so-and-so’s son going to college? Check Facebook.

Problem is, all this checking can easily spin out of control. Like at lunch, when we’re all looking at pictures of a child’s boy/girlfriend, and then we start checking out their family and then we sleuth through their past boy/girlfriends and then … well, then it all turns a little creepy when we finally come up for air.

Not to mention, those of us who’ve had to get used to this newfangled-ness, whose fingers are not as nimble as the millenials’, can really get in trouble. “I tried to get on Johnny’s date’s Facebook page,” a mom of three teenaged boys says of her oldest son. “My husband took the phone and tried to make the picture bigger and pushed something and sent a friend request to the girl! She accepted right away, but I deleted it right away because I was so embarrassed. And I did it with a friend’s boyfriend, too. She was a little kooky, so I was trolling to see what the new boyfriend was like. I went and friended him by accident. He accepted, I deleted. It’s kind of like a double-whammy – first you request, then you chicken out. The kiss of death. I should just stay off!”

Then there’s the case of feeling like you know someone, but in reality you’ve only spied them online. “I was at lunch with my husband,” a mom of two teenaged girls says. “This woman came over to the table and said, ‘Nice to see you.’ I said, ‘I’m so sorry – have we met?’ Because I do tend to forget. And she said, ‘Actually, no. I work at [the jewelry store] and when your husband started buying things, I stalked you on Facebook.’ I was glad to hear I wasn’t the only stalker around!”

While I was writing this, I vaguely remembered a friend (married) poking around to check out what her college boyfriend was up to, so I asked. “I actually didn’t stalk him on Facebook,” the happily married mother of three said. “I’m so scared I’m going to slip and like something I didn’t mean to like that I’m too scared to stalk anyone’s pages. I’m also scared there’s something technical I don’t know because I’m not savvy enough, and they’ll be able to see I was stalking them!

“But I did drive by his house once.”

That’s one rabbit hole Teri Gerber won’t fall into. The mother of two teenaged boys stays out of the social media scene. “People will say, ‘So and so is doing this or doing that,’ and I’m like, ‘How do you know all this information?’ and they always say Facebook.” Then they try to talk her into hopping on. “They say I don’t have to friend people, I can just stalk them, and I say I could care less. My life is full, I’m surrounded by good people, and I don’t want other people’s stuff on me.”

Teri even stuck to her guns after a sorority reunion, all organized on Facebook. “I say just live your life and don’t worry about all the other people.” If only we could all be so disciplined.