A Librarian’s Guide to Whodunits (And Who to Read Next) 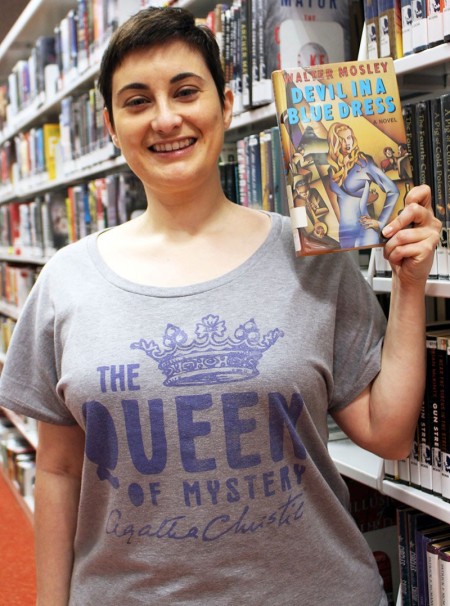 Savannah Dorsett from Houston Public Library recommends mysteries, such as Devil in a Blue Dress by Walter Mosley.

Alright I confess! I am utterly mad for mysteries. It all started in childhood with Encyclopedia Brown, that brilliant kid detective (and why Netflix hasn’t gotten on a Stranger Things-esque Encyclopedia Brown television series is baffling to me) and I haven’t looked back since. I even took a detective fiction class in college where we read everything from Sherlock Holmes to City of Glass by Paul Auster which is described as “postmodern meta-detective fiction” and hurt my brain in the best way.

I love mysteries so much that I celebrated having free time again following my graduation by starting a mystery themed book club! It’s called Murder at Midday and we meet at noon the fourth Tuesday of the month at Discovery Green. To those who may wonder why I love mysteries, I point to the fact that there is absolutely something for every taste. Within the genre there are so many wonderful subgenres - cozy, paranormal, historical, thrillers, psychological suspense. Everything from dark and gritty with paragraph long descriptions of blood spatter to light and fluffy fun set in a charming small town (I always wonder why no one comments on the high body count in said small towns.) Diversity also abounds with detectives of every background and profession, numerous time periods represented and a veritable atlas of exotic locations. So, to celebrate all things mystery, here are a few suggested titles. Check one out if you want to find out whodunit!

It feels almost as if I’m taking the easy way out suggesting an Agatha Christie novel but, with 66 novels, 14 short story collections and numerous plays to her name - including The Mousetrap, which holds the world record for longest initial run, Dame Agatha’s title as Queen of Mystery is undisputed. While most known for three series featuring married couple Tommy and Tuppence, fussy Belgian Hercule Poirot and the sharp as a tack spinster Miss Marple (who I aspire to be when I grow up), one of her lesser known one-off novels Crooked House is the title I recommend most to those starting out. Wealthy industrialist Aristide Leonides has for decades ruled his family with an iron fist - loved, feared and hated by everyone in equal measure, when he’s murdered there is an endless list of suspects and most of them live under his very roof. His much younger new wife? The son who bankrupted the family business? Granddaughter Sophia who is set to inherit everything? I love this title because it has one of the absolute best twist endings I can recall from a mystery novel, considered so shocking at the time that Christie’s publishers actually begged her to change it. She refused and later stated that this novel was one of her personal favorites. That designation alone makes it worth reading!

Prefer your cozy mysteries in a more modern setting? Then I recommend Louise Penny’s Inspector Gamache series which take place in the small Quebec village of Three Pines and has won numerous Agatha Awards. Named in honor of the Dame herself, the Agathas are awarded to titles loosely defined as “traditional mysteries which lack explicit sex, violence or gore.” Many of the characters recur through the series which only deepens the small town feel as you get to know them and also ups the emotional stakes as they end up murder victims...or the killers. The 14 title in the series, Kingdom of the Blind, comes out in November 2018. Or you can start at the beginning with Still Life and join us for the book club discussion on Nov. 27!

Looking for mystery novels with a bit more grit to them? Then I must recommend Dennis Lehane. His series starring private investigators Patrick Kenzie and Angela Gennaro are hardboiled gems featuring complex characters, intricate plots, twists and turns that will have you yelling “No way!” on the train and getting funny looks from everyone (I speak from experience) and a strong sense of place with the working-class neighborhoods of Boston and Dorchester as characters unto themselves. The whole series is great but for me, it truly reached its peak with the fourth title Gone, Baby, Gone in which Kenzie and Gennaro reluctantly take on the case of a missing four-year-old girl and are pulled into a dangerous underworld of drug dealers, kidnappers, pedophiles and just a lot of people who aren’t what they seem. One of my favorite things about the series is that the characters grow and change throughout it and decisions made in prior books echo across their lives for better or worse. Dennis Lehane is also the editor for the short story anthology Boston Noir which is part of Akashic Books publishing company’s long running regional noir series featuring mystery stories set in cities from A (Atlanta) to Z (Zagreb, Croatia.) These anthologies are a great way to be introduced to not only exciting new locations but also promising new writing talents - and then when they make it big you can brag that you were a fan of them first. Keep an eye out because Houston Noir will be published in May 2019!

What is noir you may be asking? It’s “a film or literary subgenre characterized by cynicism, fatalism or moral ambiguity” - it comes from the French word for ‘black’ or ‘dark’ so think lots of shadowed alleys and smoky bars, mobsters, crooked cops, gorgeous dames who can’t be trusted and brooding detectives who maybe aren’t afraid to break some rules to get results...If your interest is piqued by this description, then I highly recommend Devil in a Blue Dress by Walter Mosley which is part historical fiction, part noir and just an all-around ‘I have to stay up late to finish this chapter’ engrossing read. Ezekiel “Easy” Rawlins is a young, tough, African American veteran in 1948 Los Angeles who, after losing his job due to a racist factory foreman, has bills piling up. He takes on the supposedly simple job of tracking down a singer named Daphne Monet and of course things get complicated. First published in 1990, this long running series (the most recent title was published in 2016) traces the era of the post-War years through the 1960s with crackling dialogue, memorable characters, and a pull no punches look at some not so proud aspects of American history including the paranoia of the Red Scare, the 1965 Watts riots and corruption within the LAPD. And, I’m pleased to announce that on Oct. 25, Walter Mosley will be the featured author for the Houston Public Library’s Quarterly (HPLQ) author series! Check the library website for information on the once in a lifetime opportunity to hear the man share his creative insights.

Is 1950s and '60s Los Angeles not historical enough for you? How about ancient Rome? Author Lindsey Davis has not one but two series that take place during this era - featuring two Roman “informers” which are essentially old school (very old school!) private investigators. First published in 1989, her series starring Marcus Didius Falco is Ancient Rome’s answer to Columbo - rumpled, perpetually short on funds, stubborn as all get out, deeply cynical and unable to stay out of trouble. Since 2013, Davis has been writing a series featuring Flavia Alba, Falco’s daughter, who followed in the pater familias’ footsteps as an informer - and don’t dare imply in her hearing it’s not proper woman’s work! The novels are rich in period details and each one centers around some aspect of Roman life be it the aqueduct system, religious festivals, gladiator tournaments or the going-ons of the Senate. So not only cracking good mysteries, but you may learn something too! While mostly taking place in Rome proper, with the far reach of the empire there are novels set throughout the world from Egypt to Germany to the wilds of Britain - think of it as an ancient travelogue. Completists may want to start at the very beginning with The Silver Pigs, the first Falco novel, but I think there is something interesting to be said for the Flavia Alba series. As a woman she has a unique outsider perspective on things and with her sharp wits and sharper tongue, the patriarchy of Rome doesn’t stand a chance. The first title in this series is Ides of April and the most recent, Pandora’s Boy was published in July 2018.

If you still haven’t solved the mystery of what you should read next, be sure to ask your friendly librarian. You know...if she’s not busy solving crimes.