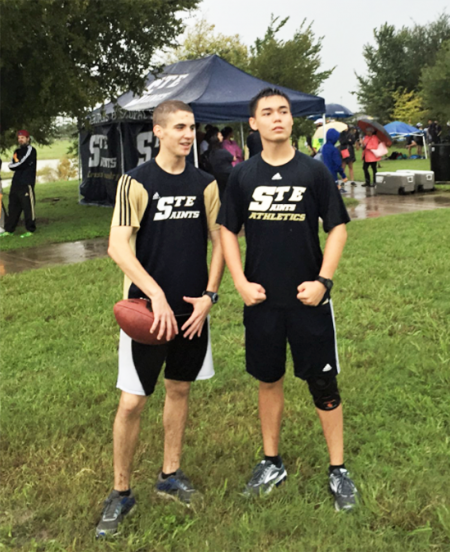 Joel Hrncir '20 and Caleb King '20 toss around the football along with their teammates while waiting for their race to begin.

However, the team would need actual luck at their own Saint Thomas’ Episcopal Cross Country Invitational on Sept. 29 at Willow Waterhole. Unfortunately, the weather forecast showed a 100 percent chance of thunderstorms and torrential rain in the morning, with the potential to clear up as the day progressed.

As hundreds of runners, parents, and fans showed up around 7 a.m. ready for the races to begin, the rain clouds gathered and drenched the enormous gathering. Our parent and student volunteers were huddled under a small gazebo that provided little protection as strong winds blew the rain. Visiting schools ran back to their buses for shelter. Band members, who were supposed to play before the first race, got soaked carrying their equipment to the gazebo. Our runners were stuck under their tent, which was threatening to fly away given the strong winds.

“As it thundered, we were holding down the tent to keep it from flying away with the wind. It was kind of fun to be trapped under the tent; we started dancing and singing to music playing from Kristen Dupre’s phone,” Bharthi Mohan ‘22 said.

After 20-30 minutes, the rain slowed down to a gentle stream. Another 10 minutes later and the runners were seen emerging from their buses and tents. Some runners from our men’s team produced a football and began tossing it around in the rain as they waited for the races to begin. 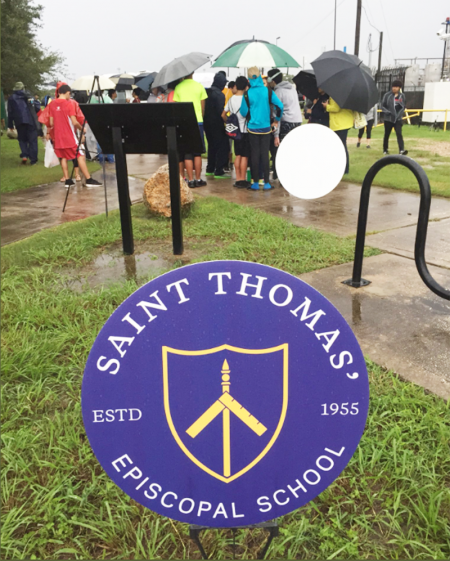 A rainy, muddy day turned into a bonding experience for STE cross country runners and fans.

“We thought that the meet would probably be canceled, so we just played some football because...why not?” Joel Hrncir ’20 said.

Due to lightning, the races were pushed back to 8 a.m. The constant rain also didn’t help the conditions of the course. The starting line now had some mud sinkholes, and the paths became very slick and muddy.

“When it got super muddy, it was really hard to run. Since I've run in this place before, I kind of knew where to run specifically,” Bharthi said.

The races began as the rain turned to a drizzle. Spirits and stress were lifted with the start of the first race. Runners passed by cheering crowds of teammates, friends and parents, who all endured the strong rains and bad weather. They were all there to support them.

“Thankfully, it was our home course, and we had our awesome fans to support us, so that helped a lot,” Joel said.

It was a day that attendees will remember as muddy and magnificent. What started as a frightful morning actually yielded a great bonding experience for both the runners and the fans. Cross country is a sport for runners with great stamina and motivation, and the wet conditions provided a fitting challenge for these dedicated athletes.