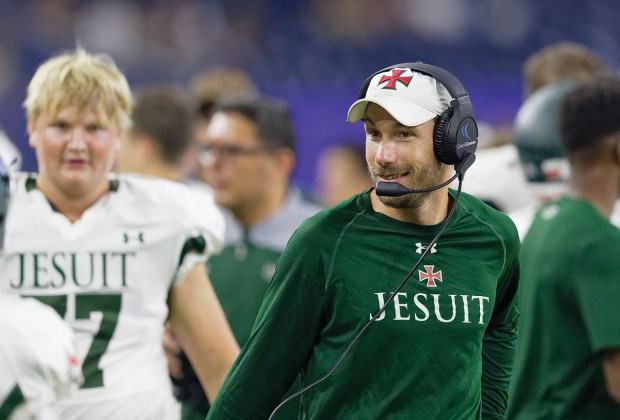 A big rivalry game certainly warrants a big venue, and it didn’t get any bigger than NRG Stadium for the season opener between the St. Thomas Eagles and the Strake Jesuit Crusaders. With several thousand fans from both schools in attendance, Strake Jesuit lit up the scoreboard for a high-scoring 56-32 victory.

The win also marked the inaugural victory for Klay Kubiak as the Crusaders’ first-year head coach. Kubiak secured his first coaching victory in the same stadium where his father, Gary Kubiak, roamed the sidelines as head coach of the Houston Texans.

“It was pretty awesome for everyone within our program to get that victory at NRG Stadium,” said Kubiak. “Our kids were pretty fired up for the rivalry, but they did a good job of not letting the environment overwhelm them emotionally. Our fans showed up in huge numbers, and the guys kind of thrived off that support. It really was a once-in-a-lifetime type of experience for the entire team.”

Leading the way in the game was senior running back Michael Wiley, who rushed for 205 yards and two touchdowns, including an electrifying 96-yard touchdown run late in the first half. “Michael had a great season last year, and we have high expectations from him this season,” said Kubiak. Quarterback Michael Hansen also had a big game with 268 passing yards, while Kubiak had high praise for the defensive play of seniors Jack Pittinger and Denzel Blackwell.

At St. Pius X High School, it was also a successful coaching debut for Panthers first-year head coach Erik  DeHaven, with his team securing an impressive 55-21 victory over Beaumont United. “It’s a tremendous group of young men that make up this football program,” said DeHaven, who’d been the Panthers’ defensive coordinator the previous four seasons.

DeHaven inherits a tremendously talented team, led by heralded quarterback Grant Gunnell. Gunnell, who has committed to play college football at Arizona, is rated among the nation’s top quarterback prospects. “He’s definitely one of those once-in-a-generation kind of guys,” said DeHaven. “We’re blessed to have him at St. Pius.”

ROAD WARRIORS The Episcopal Knights celebrate a touchdown in their season-opening victory in Asheville, North Carolina.

It wasn’t your typical season opener for the Episcopal Knights, who traveled to Asheville, North Carolina, to face Christ School in the first game of the year. Led by quarterback Nick Mayberry, who threw for over 300 yards and three touchdowns, the Knights posted a 28-21 victory. “Our athletic director is from that area and he set up the game,” said Knights head coach Steve Leisz. “It was a great bonding experience for the entire team.”

Much closer to home, the Knights followed up the season opener with an impressive 34-28 victory against a Navasota High School team that was ranked 12th in UIL Class 4A football. “That was a great win for us, especially beating them at their stadium. It’s a tough place to play,” said Leisz.

Offensively, the Knights feature a young yet heralded offensive line led by sophomore Donovan Jackson. The 6-5, 295-pound offensive tackle is already a five-star recruit and is the No. 2-rated sophomore prospect in Texas. In addition, fellow sophomore offensive linemen Cullen Montgomery and Luis Chavarria are already being recruited by collegiate programs. “Plus, our senior center Carter Bunk is doing a great job of leading an extremely young and talented group,” said Leisz.

The Knights feature plenty of offensive power in running back Jaylen Davis, who rushed for 180 yards and two touchdowns in the win over Navasota. In addition, wide receivers Julius Young and C.J. Williams boasted five touchdown receptions through the first two games. Defensively, the Knights are led by senior defensive end Patrick Bayouth, senior linebacker Jordan Wells and junior linebacker James Ogunrin, all of whom are being recruited by major collegiate programs.