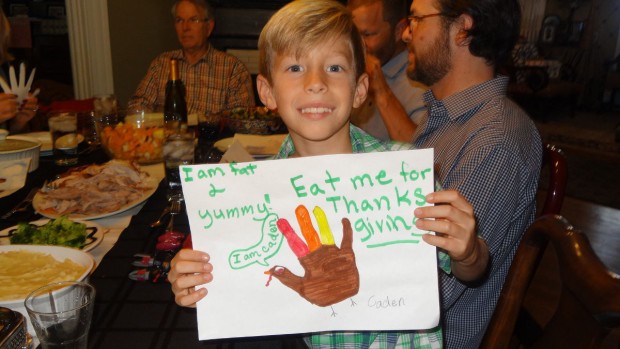 Caden Glazner proudly poses with the Thanksgiving Turkey Hand Artwork that a family member secretly made for him.

Ahhhhh, Thanksgiving. The mostly laid back (besides all the baking and doing dishes), highly anticipated, delicious, once-a-year-meal with your loving family holiday celebration.

There’s a lot of family together time! So we’re thankful these Buzz families shared some of their gobbliest Turkey Day bonding traditions to inspire us, too….

The Annual Lamar/McGee/McCarley Count Off

Large family celebrations for Thanksgiving are all that Lynn McGee McCarley grew up knowing. Her mom, Barbara Lamar McGee is the baby of five Lamar kids. Their family Thanksgivings can have up to 65 people. Sort of like a family reunion weekend slammed into 12 hours. And these people have the peppy genes to pull it off (sort of like a cheerleader convention or speed dating). Who has a house big enough to host that many people? The Lamar family can give thanks that Barbara married Lynn’s dad, Corky, because in addition to being a great husband, one perk of having a pastor in the family is that they have keys (and permission) to utilize the church fellowship hall.

As the family grew over the years, so did the confusion on keeping it straight who was who. Between new spouses, babies, puberty, middle-aged brains and out-of-town visitors and in-laws, it was hard to know who everyone was.

Yes, there were name tags, but it was still hard to place people. One year someone rather jokingly devised a number system to know who belongs to who. And that’s how Lynn’s Thanksgiving nametag magic number became 5-3.

The five is because her mom (first generation) is kid number five. The three is because Lynn is the youngest of three. Then her first-born son, Magregor, is 5-3-1. And second-born son, Grayson, is 5-3-2And then last, but not least, husband Leroy is 5-3-S (spouse!).

Before the big meal, everyone circles up like the Whos in The Grinch who Stole Christmas, and holds hands. And have the big annual count off…

The first person starts with one and each person says the next number….and the big finale is to see how many people are actually there! “We don’t really keep track, it’s just a fun tradition. Everyone just cheers at the end of the count off. Then we pray! And then we go eat!” 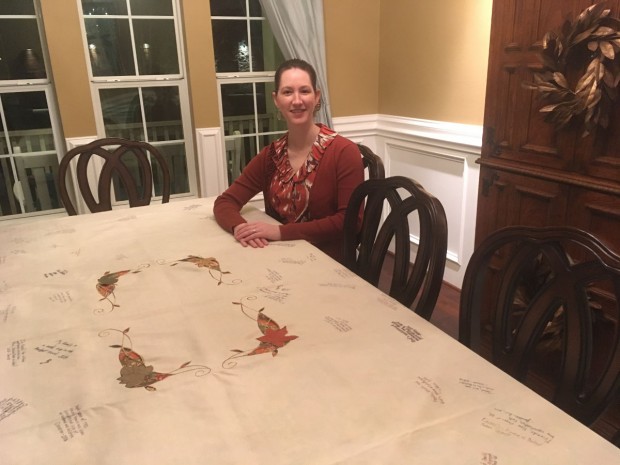 Cameron Fahrenholtz Jeter loves hosting Thanksgiving with out-of-town family and friends and thankful to have a special tablecloth to preserve the memories every year.

Growing up in Kansas, Thanksgiving was always a beloved holiday to Cameron Fahrenholtz Jeter and her family. As newlyweds, Cameron and her husband, David, moved to Houston and in the early years weren’t able to afford the cost or vacation time to travel home to Kansas for the holiday.

As time passed and they moved into a larger home, they invited their family to come to Houston for Thanksgiving. Cameron’s parents, siblings and extended family eagerly accepted, and now come each year.

Knowing that she intended to keep the tradition going, Cameron wanted a record of their gatherings. She had read about a “Thanksgiving tablecloth” that would record attendance and reasons for thanks. In 2010, she purchased a large cream tablecloth with fall leaves at the corners to be used only at Thanksgiving. Guests record their name, year and something for which they are thankful.

Cameron shared, “It brings me great joy that I can see who gathered which year and what was a struggle or triumph for them at the time. We have hosted various friends including the German exchange student from when I was a fifth grader. Now that my dad has passed, reading and touching his writing is a comfort. We use permanent marker and it holds up to washing.”

We’re also guessing that somewhere on the tablecloth it thanks the Jeters’ neighbors who are always travelling the week of Thanksgiving but are gracious enough to hand Cameron the keys to their house for any of the Kansas family members to use! 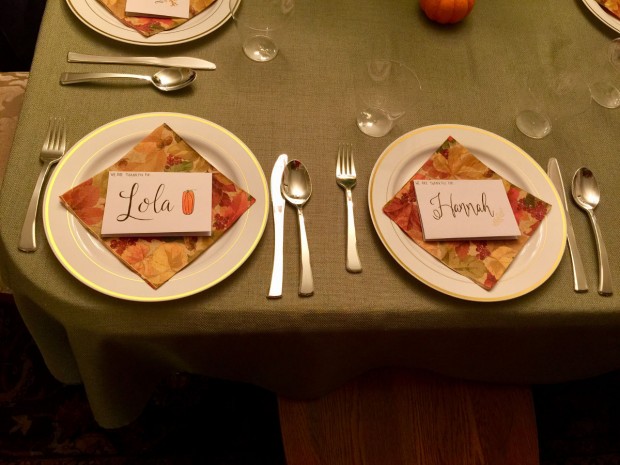 Guests knew where to sit thanks to beautiful handmade name cards that became even more beautiful once friends listed reasons they were thankful for each other.

Last year, Hannah Snow and her fellow Memorial High School senior girlfriends (now freshmen at various colleges) gathered at Hannah’s house the week of Thanksgiving for a Friendsgiving meal. Each girl brought a dish to share.

The table was set with a folded name card at each place. Before the meal, everyone sat with pens and passed around the placecards. The assignment was to write something you were thankful for on the inside of each person’s name card. After the cards were passed around, the girls got their name card back filled with special things people appreciated about them. 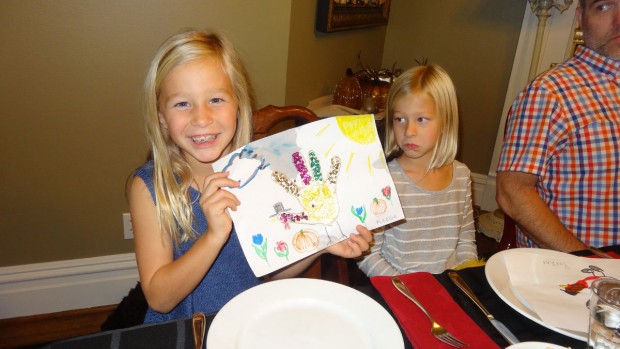 Reese Glazner is all smiles that her family agreed to play the "Guess the Turkey Hand" game she created. Her little sister Parker is also happy to be visiting their grandparents for Thanksgiving.

Proud grandma Jan Glazner, whose grandchildren Caden, Reese and Parker call GG (short for Grandma Glazner), shared a tradition that was created last Thanksgiving. Middle grandchild, Reese, who was 8 at the time, came up with the idea while she was visiting from San Diego with her parents and siblings.

GG said, “This is something that keeps the children (and non-chefs) busy while others are cooking.” Each picked a top name from all the people who would be at the Thanksgiving meal. The assignment was to decorate a picture for that person by tracing your hand and creating a turkey picture. “We had a craft table with markers, glitter, construction paper, etc. Throughout the day people would ‘sneak’ up to work on their picture in secret. The recipient’s name was on the picture but not the creator. Completed pictures went in a stack and were used as placecards. Everyone had to guess who drew their picture before we started eating. It was lots of fun, lots of laughs. All participated - children and adults.” 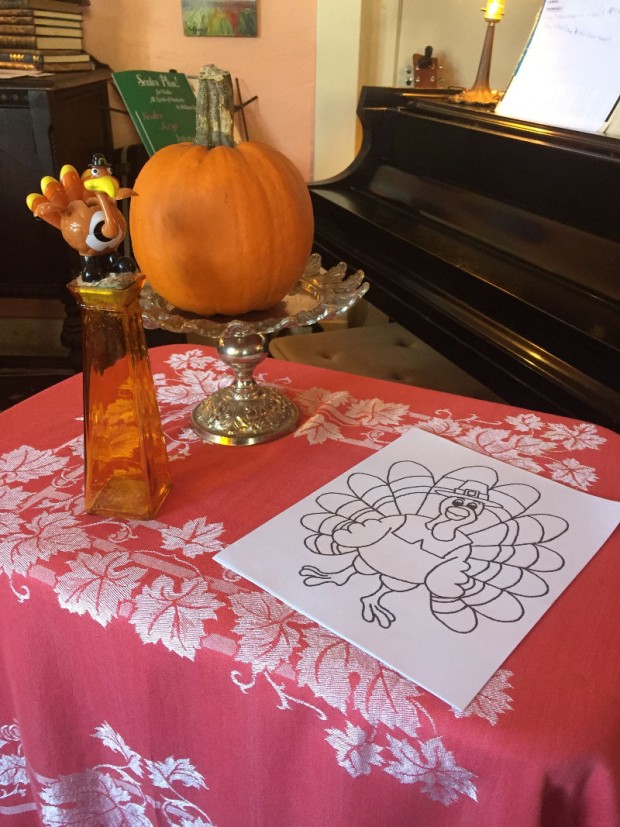 The Cordell family's coveted turkey coloring sheet contest trophy.  The winner gets to keep the trophy until next year's Thanksgiving. The treasured heirloom was handmade from a lovely vase and a solar powered dancing turkey found at the dollar store. The winner's prize also includes getting to take home the leftover sausage rolls!

Each year, a new coloring sheet is chosen, and the decorating takes place while the turkey is being prepared. Then, Andrea shares them on Facebook and Instagram and her network votes on their favorite works of art. “At the end of the day, the coloring sheet with the most votes winner takes home the Dancing Turkey Trophy and all of the leftover sausage rolls,” said Andrea. “The adult kids are the most passionate about it and are already asking about this year’s choice of coloring sheet. Last year’s winner (my now married son) is claiming he lost the trophy because he does not want to give it up!”

This year one of the family members is in the military and doesn’t get to come home for Thanksgiving but he’s still to be part of the contest as Andrea is going to email him the coloring sheet and post his entry with the others. He is under strict orders to only use the same supplies as everyone else . . . crayons! (There may or may not have been some unapproved extra craft items snuck in last year.)

One of the beauties of having four children is not needing to find enough people to play football… you already have two kids for each team, a dad to be all-time quarterback and a mom and dogs to cheer you on. At least that’s the gameplan for the annual Taper Thanksgiving Bowl.

Quarterback John, cheerleader Tricia, star players Natalie, Morgan, John and Merritt (kids ranging from high school aged to young adults), mighty mascot dogs Liam and Piper and occasionally a few fans and relatives enjoy the annual post-dinner game. Natalie, the oldest Taper, and Merritt, the youngest Taper, shared some play by play highlights: “Dad’s always the quarterback for both sides and every year we mix up who of us four kids is on which team. There was that one year Dad fell and we all just sort of watched him fall in slow motion. Normally someone has a piece of clothing torn. And for sure someone always ends up crying.” The sisters smile at each other and nod in agreement, possibly already plotting their game plan against the two middle children this Thursday!

Lots of great printable game ideas, coloring sheets and icebreakers can be found online such as create-your-own-search-and-find and Thanksgiving trivia. (Be sure to have lots of pens). You can always find prizes at the dollar store. Here are some online examples:

Or make up your own Thanksgiving trivia sheet based on your guests. I did this a few years ago and included questions like: “On average, how many pounds of turkey do Americans eat on Thanksgiving?” and “How fast can a turkey fly?” and also personalized questions for our Thanksgiving crowd, such as “Which Thanksgiving guest is originally from New York?” and “Which of these side dishes did so and so NOT make this year?”

One of the more entertaining games I found online was a drinking game for the Macy’s Day Parade. But that sounds awfully dangerous!

However you celebrate, cheers to a great Thanksgiving!