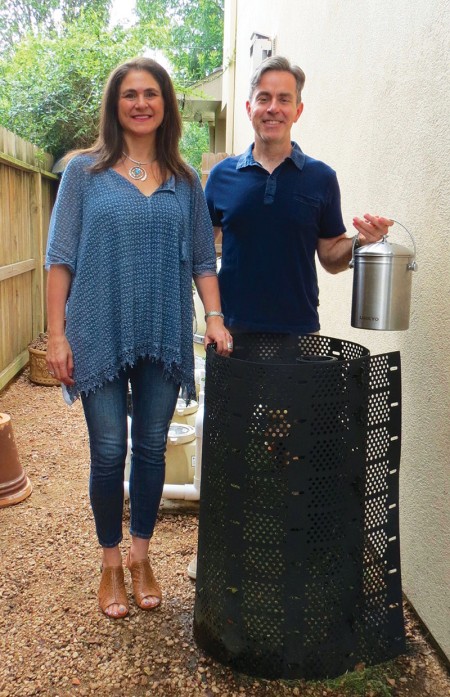 BACK TO THE LAND Buzz residents Cynthia and David Portugal have joined a wave of converts to the composting revolution. They are using a simple Geobin composter in their yard and a stainless steel canister in the kitchen to collect the scraps.

Our new series, Going Green, tells the stories of Buzz readers who are making the shift to more sustainable lifestyles. If you have an idea for a story, write to us at [email protected].

As a health and wellness coach, Cynthia Portugal has long thought about ways to contribute to a healthier lifestyle, and that has always included the larger environment. She and her family eat a lot of fresh fruits and vegetables, and she used to be bothered by the food waste her family generated. For years she had wanted to compost that waste, transforming it into rich, black soil, as she had back in the days when she and her family had rented a home in Boston with a compost area they shared with their landlord. But the compact backyard in her Bellaire neighborhood didn’t seem to permit that, so she resigned herself to throwing it all away.

Daughter Sarah, however, went off to see the world and came back with different ideas. Sarah was fascinated with sustainable lifestyles and organic farming, and she traveled the country, working on different organic farms in exchange for her room and board under the WWOOF program (World Wide Opportunities on Organic Farms). When she came back to visit, she was increasingly bothered by the waste. Composting was easy, she told her parents, and it didn’t require a lot of space.

In June Sarah came for an extended visit, and Cynthia finally decided to make the leap. Now she’s joined the growing numbers of people trying their hand at composting – illustrated by the 54 people who signed up for a composting workshop organized by the West University Recycling and Waste Reduction Board last month.

Americans lead the world in wasted food, with an estimated 50 percent of produce in the U.S. going into the nation’s landfills, or about 60 million tons a year, according to one report.

Architect, environmental educator and West U resident Steve Stelzer presented that composting workshop for his neighbors as part of his outreach to help reduce waste more generally.

“It is the ultimate recycling because it’s nature,” said Stelzer. “You are merely utilizing the microbes and the natural decomposition process.”

Stelzer has drawn inspiration from Kristin Ohlson’s book, The Soil Will Save Us, and also Drawdown.org, which promotes 100 strategies aimed at reversing global warming. Reducing food waste is No. 1 on the list of what individuals can do. It’s a problem that needs to be tackled at every stage in the process, beginning at the point of production, he said.

Rotting food in landfills is a huge generator of methane – a greenhouse gas 30 times more potent than carbon. Composting that waste, in contrast, helps restore the intricate network of microbial life that healthy soil requires – with an added bonus. “If we were to scale this up, we could sequester an amazing amount of carbon,” he said. “That’s a form of healing – and we need more people healing this planet, because we’ve abused it badly.”

Like Cynthia, Lauren Figard was bothered by the vast quantities of food waste entering the nation’s landfills. Lauren, a molecular and cell biologist at Baylor College of Medicine, also ended up buying a kit from Amazon, which included a two-chamber bin. In the three months she’s been composting, she’s filled the first chamber and now is “letting it cook” while filling the second chamber.

It was surprisingly easy, she found, and it’s been great fun to share it with 19-month-old daughter Gwen. The hardest part, she said, was just getting started.

“I was concerned about smell, but that wasn’t a problem, as long as you put the right ingredients in it – just vegetables, leaves and scraps, and leave out the meat, dairy and eggs. I haven’t really had a smell problem – so it’s not going to be something that’s weird and stinky in your yard.”

To Cynthia, it all comes back to just doing your part. “There are things going on in our environment and our world that we might not be happy with, and sometimes it’s overwhelming,” she said. “Sometimes you feel that you can’t make a difference. I don’t agree with that. We’re just trying to make a difference in our own little family and do the best we can in our own little environment. It’s not moving mountains but it’s doing something to contribute; we’re just making small baby steps, but every baby step is a step in the right direction.”

You can do it too, and here’s how

Think you can’t compost? Well, let me share something with you. I live in a two-bedroom, second-story apartment in downtown Guadalajara, and I compost. In a tiny patio the size of a walk-in closet. Not just compost, mind you, but vermicompost – that’s right, food scraps and kitchen waste wriggling with red earthworms. And not only does it not smell bad – if it did, my neighbors would call the landlord on me, as we share that patio – but it’s also great fun.

But there are as many ways to do compost as there are people doing it. “You can go to YouTube and do a search on composting and find 50 gazillion videos; it’s not rocket science, by any means,” says Steve Stelzer, who’s been composting for years and teaches others how as well.

Here are a few tips, compliments of Steve Stelzer and me, to get you started.

Obviously it’s possible to make mistakes that can cause you problems. Let’s try to prevent that.

“There are two ends of the moisture spectrum. If you get it too wet, it’s going to smell,” says Steve. “You’re going to promote the wrong kind of microbes, the stinky ones. If it’s too dry, you won’t have enough microbes, so there won’t be much breakdown at all. It’s pretty Goldilocks – too hot, too cold, just right.”

Don’t worry about perfection, though. The point is just to begin – and adjust as you go. One good moisture test: put your gloved hand and if you squish it and water’s coming out, it’s too wet.

Your mix should ideally comprise around 50 percent green or fresh material and 50 percent dry brown material, but you can get away with less. Kitchen scraps, fresh grass clippings and green garden waste qualify as greens. Dry leaves or grass clippings qualify as browns. So do shredded paper, processed fiber, cardboard – you can even use paper towels or even cotton clothing. Any kind of fibers that are biodegradable will work; anything made from a plant that hasn’t been toxified.

There are two types of composting – hot, and cold. Hot composting requires more high-nitrogen materials and closer monitoring, but it’s faster. Home backyard composting usually utilizes cold composting, which is lower maintenance. If you want to just take your kitchen waste out, dump it in, cover it with browns and walk back in, you’re a cold compost type.

One advantage to the hot method is that it will kill pathogens as well as weed seeds. If you are using the cold method, avoid putting weed seeds in your compost or you’ll end up inadvertently seeding your garden with weeds as you fertilize.

Avoid putting in bones or biodegradable plastic. Commercial composting facilities are hot enough to break those down, but at home, you’ll have a hard time with them.

Meat, fat, grease and oils: Some avoid these items for fear that they will draw pests. Stelzer says that small amounts, in moderation, are ok.

Citrus and avocado peels, mango and avocado pits: It depends on your patience. These things break down very slowly. If you’ve got a nice big hot compost pile cooking in the back, go for it. Or if you don’t mind pulling them out and breaking them down a bit by hand after the first round, you are doing a service to humanity.

Carnivore pet waste: Avoid, especially for cold compost piles. They are meat eaters, and they could have some diseases that since you’re doing it the slow way they might be able to survive. Herbivores are ok.

Choosing your bin: Again, it’s a matter of preference.

I use a five-gallon bucket with holes drilled in the bottom, which drain into another five-gallon bucket with holes in the top. The liquid that drains into the lower bucket is called worm leachate, and can serve as an excellent fertilizer, with a few caveats: see here. I’ve got a bag of dry leaves on one side, and I toss in a couple of handfuls every now and then when the compost is starting to smell or draw fruit flies. That takes care of it.

Steve recommends having a container with a lid, certainly a good idea in the city where you want to avoid attracting animals. Steve’s container has an escape hatch at the bottom so you can dump the compostables in the top and take the finished product out of the bottom as it ages.

Rotating drums: Lauren Figard uses a two-chamber rotating drum and loves it. It has two compartments, so that she can let the first one sit and age while she’s adding to the second one.

Shade: It’s better to put your bin in a shady spot if you can. If you put it in full sun, the plastic bin breaks down faster, and the heat will evaporate the moisture.

Aeration: Your compost will break down much more quickly if you turn it periodically – about once a week is ideal, but you can get away with monthly. I use a big metal spoon to dig down into my compost and stir things about, giving my earthworms a big hello when I do it. It makes me happy to see them working away down there. Steve has invested in an aerating tool with a pin and arrowhead and two short stems that will collapse as he shoves it down into the mixture; as he pulls it up, it will expand, allowing him to pull the material from bottom to top. Google “compost aerating tool” and you’ll see lots of models.

Greens vs. browns: Create an ample and airy space for your browns – chicken wire is perfect – and start stockpiling. Fall is the perfect time; gather your fall leaves and pile them up. If you’re pruning or weeding, let your greens dry a little before you cover them up so they can be used as browns.

Time: If you really work it hard, and cut up your scraps before tossing them in, you can get compost in a month. If you just turn it just once in a while, it can take about three months. If you don’t do anything at all, it could take about a year.

“It doesn’t need to be a big mystery, although it’s not completely idiot proof; you do need to pay attention and learn,” said Steve. “You may have a few spot failures, but it’s fun. For anyone who enjoys gardening, they’re going want to know how to compost.”