A Red, White and Blue Thank You: West U Elementary Honors Veterans 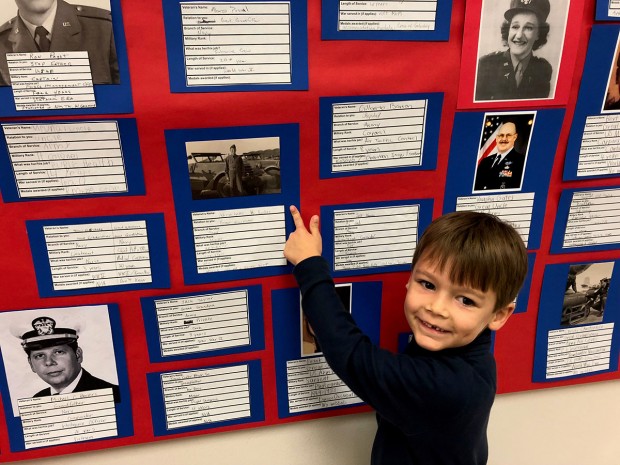 Kindergartener John Carter Lewis is thrilled seeing all the brave American soldiers on the Wall of Honor.

Skipping down the hallway of lockers recently adorned with red, white and blue handmade American flag magnets, West University Elementary students glance up with wide eyes at the faces of uniformed men and women looking down from the Wall of Honor.

This special wall, assembled in observance of Veterans Day, Nov. 11, honors military veterans from all branches of the service. Students and staff submitted pictures of relatives who have served in the military to create the patriotic collage. 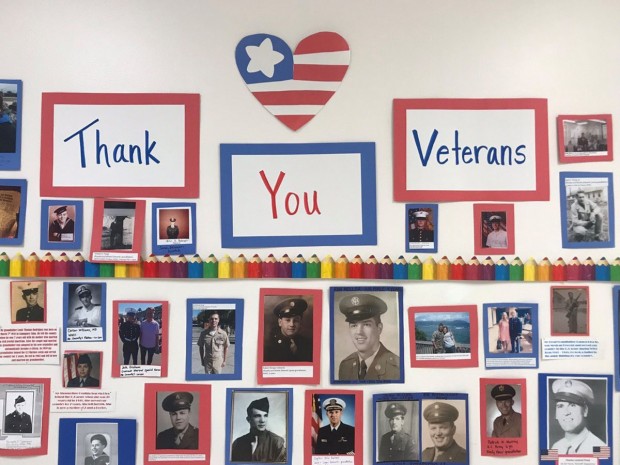 West U Elementary relatives who have served are proudly displayed for the entire school to see.

“The Wall of Honor helps students realize most of us probably know someone, directly or indirectly, who has served in our country’s military,” said Amber Pinchback, WUES assistant principal. “No matter how many times students walk by the wall, the kids are still mesmerized and find new information and pictures. I’ve seen many students and their families taking pictures next to their relative on the Wall of Honor because they are so proud and excited.”

Ms. Pinchback, whose grandfather served in the 101st Airborne in Korea, has a passion for promoting patriotism. She was inspired and had the opportunity to create the Wall of Honor and assist in creating other patriotic projects since she joined the WUES family five years ago. One memorable event was a past President’s Day when the school wrangled all 1300 students dressed in red, white, and blue onto the back ball field then arranged them to make an American flag and took an aerial photo. 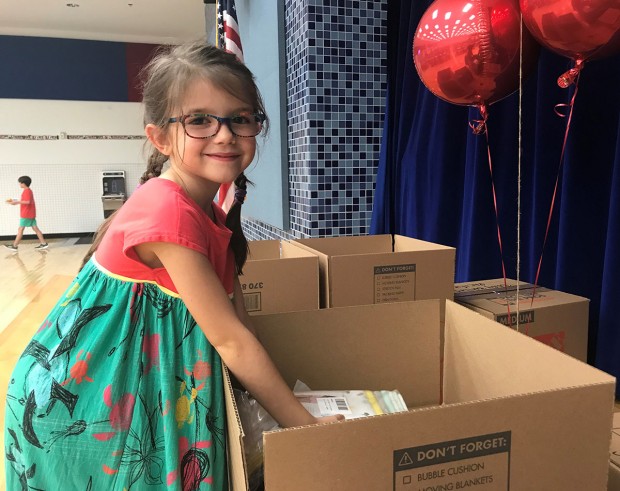 First grader Lyla Davis is excited to add to her class's donation of supplies for veterans.

With a nicer and more petite demeanor than your typical drill sergeant, PTO vice president of service, Olivia Benitez, has been rallying the troops to orchestrate all of this year’s Veterans Day events. “It's important for the kids to participate in these projects. People should have patriotism and respect for the people that serve our country. It really promotes and installs patriotism in our kids for this wonderful country we live in!”

In addition to the Wall of Honor and magnet art project coordinated by art teacher, Allison Taghavi, the mighty West U Mustangs are also creating handwritten holiday cards to be distributed to veterans throughout the year to help them celebrate holidays such as Valentine’s Day, Thanksgiving and Flag Day. 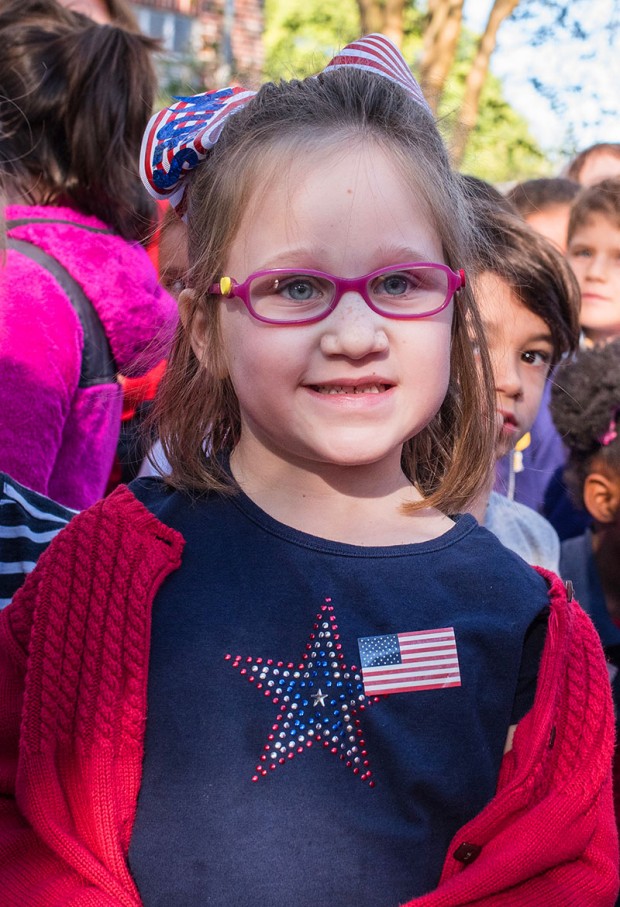 Caroline Benitez proudly wears her red, white and blue and looks forward to saying the pledge with all the other first graders in her class.

Donations will be given to the Michael E. DeBakey VA Medical Center in Houston, which serves military veterans and their families. The American Legion Auxiliary honors the sacrifice of those who serve by enhancing the lives of our veterans, military and their families, at home and abroad. 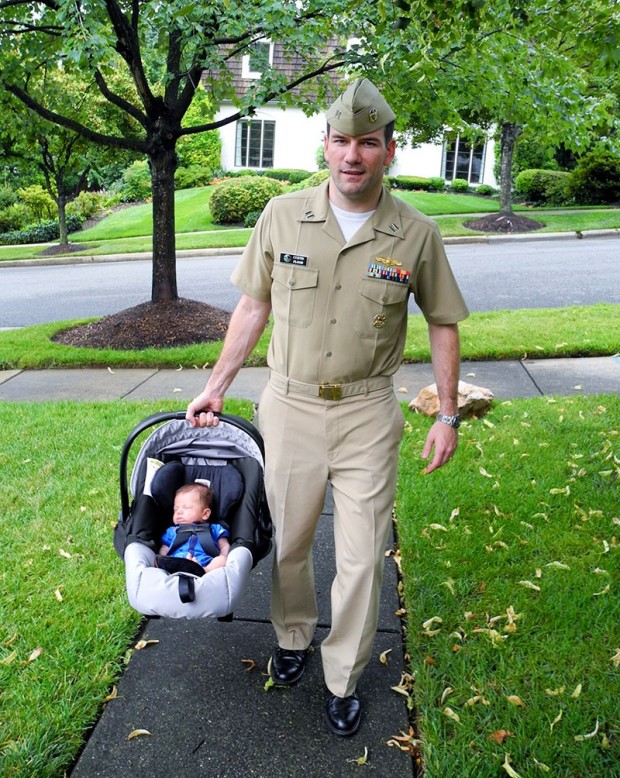 On Veterans Day, the Junior Reserve Officer Training Corps from Lamar High School will present colors and lead the school in the Pledge of Allegiance. The students will sing patriotic songs for active duty and retired veteran attendees, many of whom will be dressed in uniform to represent their military branch.

WUES will honor veterans in attendance including two of their own staff, fourth grade math teacher, Tammy McIntyre (Army Specialist 4. Ms. McIntyre’s father served in the Army and her brother in the Navy), and plant operator, Aaron Collins (Army E4 Specialist in the 2nd Army division, Air Defense Artillery, Chaparral Air Defense). Mr. Collins’ dad and brother served in the Coast Guard, his father for 35 years. 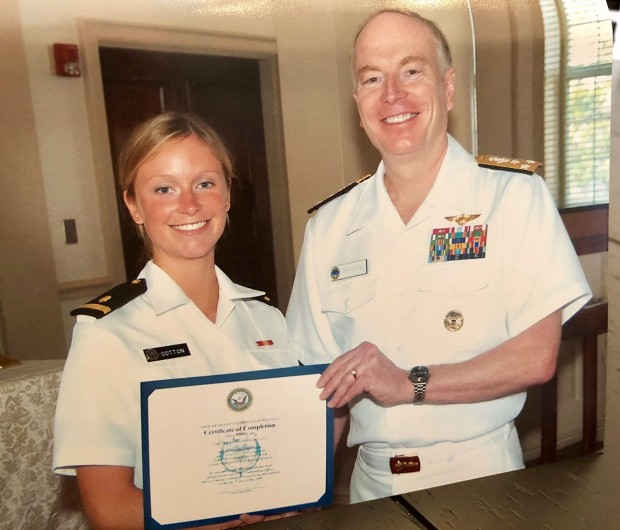 “It is important for our kids to learn about our country, its history, and how we got where we are today, and who brought us here,” said Ms. Pinchback, whose veteran grandfather must be so proud of her appreciation of those that proudly serve the United States of America. 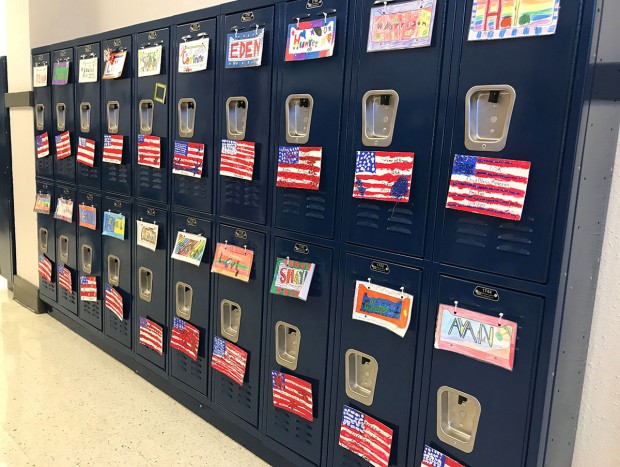 A hallway's worth of American flags flying give a patriotic glow to the West University Elementary lockers. 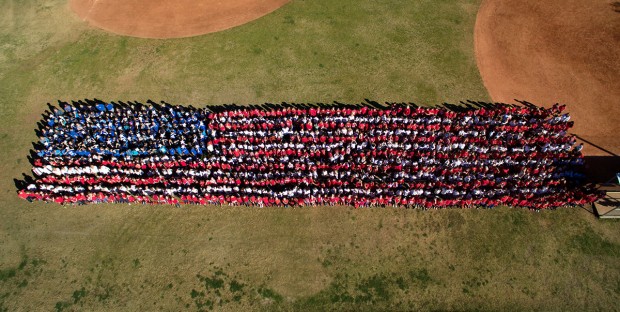