Confessions of a Live Nativity Shepherd: Memories from 'Christmas Alive' 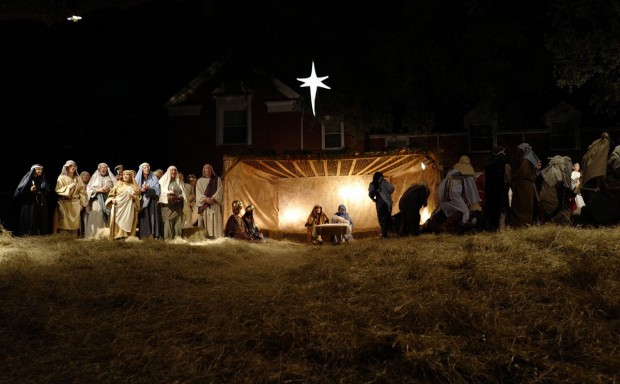 On the first Sunday night in December, you can find me sitting on the most valuable and coveted piece of property in West University: a bale of hay on the front lawn of West University Methodist Church.

Since 2001, I’ve been a singing shepherd in the live nativity performance known as Christmas Alive. In fact, that first year, I was a seven-months-pregnant shepherd. Not many people can put that on their resume.

The bonus of being pregnant was that I scored the bale of hay in front of the adult shepherd choir by the stable. I soon realized that it was like having front-row seats at a Rolling Stones concert. You get an up-close view of the big three - Mary, Joseph and Baby Jesus (yes it’s a real, live baby, not a doll), the kids’ angel choir, the teenage shepherds with squirming farm animals, the “almost graduated high school” wise men and my people, the townspeople also known as middle-aged singers. 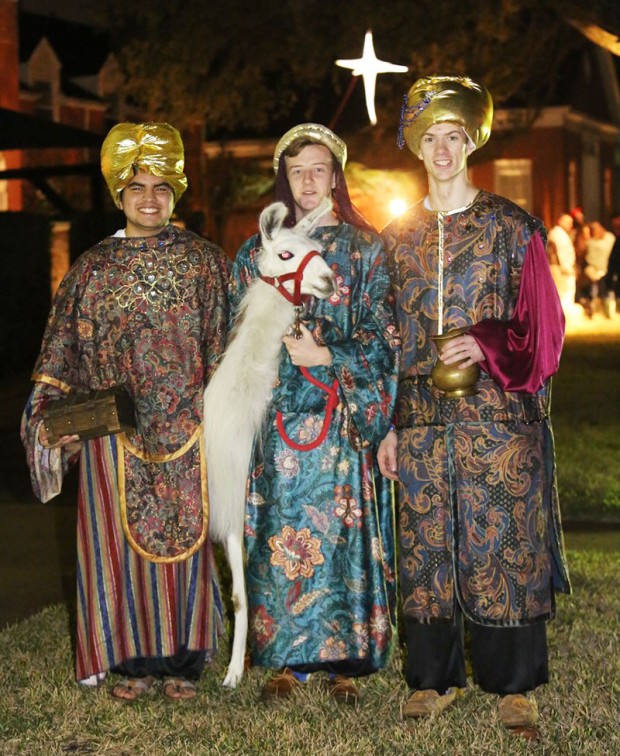 Grayson McCarley, Graham Newick and Andrew Donnell were the 2016 Wise Men with a kinder, gentler but hopefully not spitting llama.

The “general seating” option isn’t too shabby as the street in front of the church is blocked off for 350 chairs. You also get a free wassail (hot cider) when you walk up.

I’ve enjoyed it so much I’ve continued every year and so has my baby boy – now a high school junior. I’ve been lucky enough to watch my son and hundreds of other church kids grow up through their nativity roles.

My husband is happy being part of the audience. His “performance stage” is helping to build the stable, hanging lights and putting away chairs.

Bellaire resident Laura Elwood created the show back in the mid-'80s. “I was asked to ‘consider’ putting together a live nativity by the children’s ministry. Because I’m an old drama teacher, that spoke ‘production’ and ‘fun’ for me. The first year was freezing cold and we almost called it off. Instead we pressed onward and bought wool caps for the children to place their halos on.  With white costumes over their puffy jackets they looked more like The Pillsbury doughboys than angels. It’s always a joyous time to share with our neighbors and friends.” 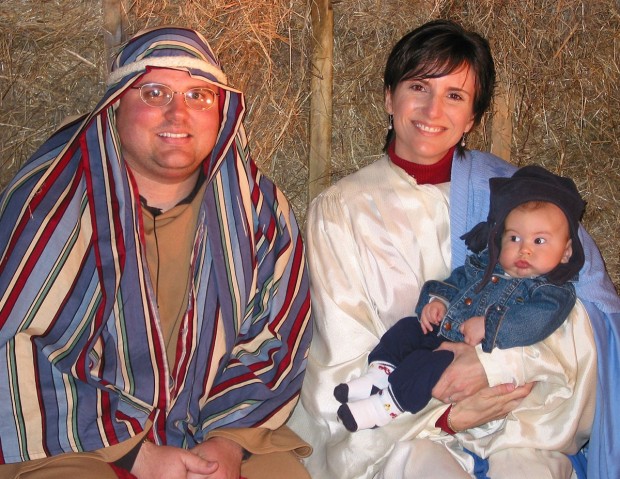 2001 Baby Jesus and now Episcopal High School junior, Wilson Grant, has his doubts about Joseph. He was denim Baby Jesus at rehearsal because it was so cold.

If you strategically plan your pregnancy just right, your child can possibly be baby Jesus. It’s usually best if Christmas Alive baby Jesus was born in August/September so they are hardy enough (but not too hardy for Joseph to hold) by December and have had all their shots.  One mom of a Christmas Alive angel confided that they didn’t plan the pregnancy but had actually just been to a really fun Christmas party the December before the September birth. If there is more than one baby that is ideal age, the name is drawn from a hat. The church is equal opportunity and Jesus can be a girl or a boy.

From a former Jesus birth mom, “Being the mom of Baby Jesus is quite an honor. I remember feeling an overwhelming sense of pride watching our baby ‘perform’ and proud that he didn't freak out! A modern day pacifier was put to use -  anything to keep him happy! He did reach out to Joseph during his solo song...thankfully he did not pull his microphone off!”

Everyone holds their breath that Joseph does not drop Baby Jesus (or the mike) when singing his solo. Jesus often starts crying on cue when the lyrics say, “Look at you now, sleeping so silently.” Joseph normally passes Jesus off to Mary about that time. 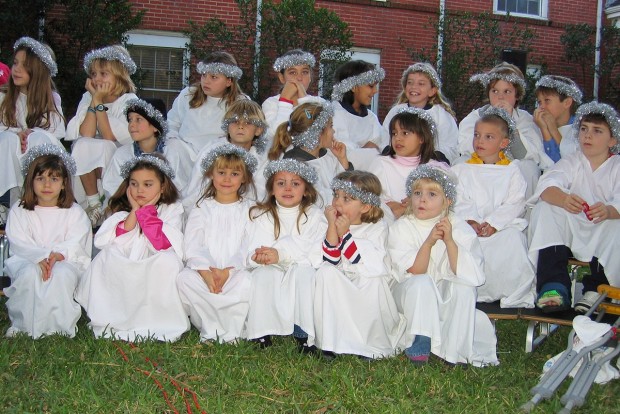 When they are in elementary school, kids get to be in the Angel Choir. Every year they try to sneak the angels in quietly during the Joseph solo, but have you ever heard of 50 5-12-year-olds in long gowns filing quietly onto risers in the dark? It’s always fun to look for the tipped halos.

You can tell a lot about a person’s personality by the way they wear their halo (or how itchy the halos are!)

An infamous year included the adorable girl angel with a sore tummy. In her defense, she had  shared that she wasn’t feeling very well before she got sick on her neighbor angels.

The tiniest of angels usually stand in the front row.  Inevitably one of them will discover the magic of having a live microphone right in front of them. It’s bonus entertainment value if that child is already using a shouting singing voice.

Back in the day, the choir would play Angel Bingo in the choir room using Smarties candies as markers. Come to think of it, that may have been why someone had a sore tummy.

During the show, there’s a  donkey handler and a camel handler but definitely the most challenging job is the kids’ angel choir handler.

Lee Ann Payne takes on this role as Angel Choir director/handler. She said, “These excited kiddos are full of energy and have to dig deep in order to stay still on those risers for 10-15 minutes! Sometimes I do have to sneak out of my hiding spot behind the big oak tree and tell kids to stop talking or messing with each other. But, during the actual show, they always perform their best and earn those halos!” 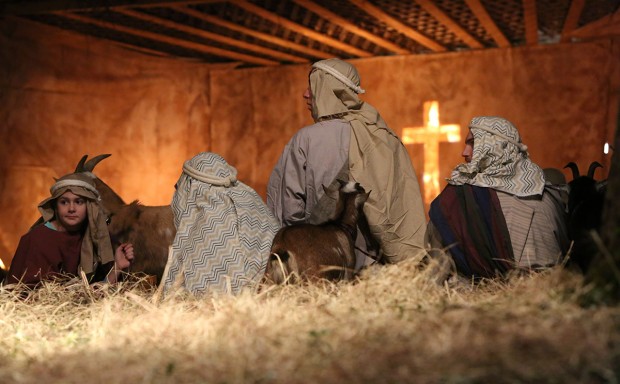 Eleanor Brown, AOS student and big sister to two baby Jesus alumni brothers, gets her moment in the spotlight as a middle school goat keeping shepherd.

Youth shepherds and baaahhh-ing baby farm animals sit quietly by the stable. No cell phones (lights of any kind) allowed…talk about a Christmas miracle.

Planners learned to harness the sheep and goats after the year they had to chase them…they jump from arms.

The Three Wise (or at least almost-graduated-from-high-school) Men have traditionally wrangled a live camel but since the “camel incident” they just walk a llama and a paid professional makes sure the camel behaves. (No kids are allowed to sit on the sidewalk anymore. Too close to the camel. A camel kicked a Town Choir singer one year. Luckily no one was harmed.)

That naughty camel is always trying to steal the show, nibbling on Wise Men crowns and once even swaying in rhythmic time to Silent Night.   Through the years there have been goats, donkeys, cattle, sheep and even a spitting llama. 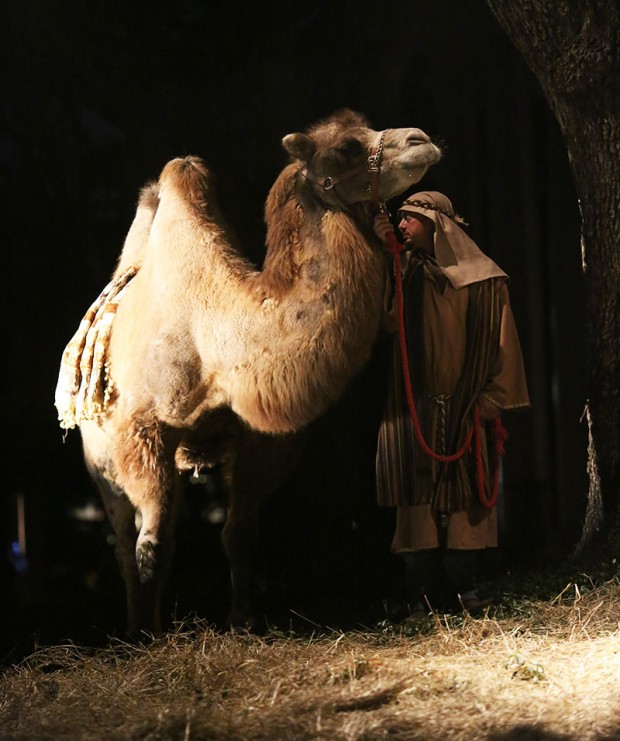 The mighty and fierce camel with his handler to avoid any more shepherd kicking or wiseman crown nibbling.

Choir director Lynne Jackson, who has been helping to coordinate for 26 years, says, “In 2012 when we went to rain date and lost the camel, we walked the llama across with the Wise Men. I knew the continent was not right, but it was fun! As a joke, I re-wrote We Three Kings to introduce the llama ‘We Three Kings of Orient Are, with a Llama from Bolivia.’” She asked to make it clear that they did not perform the llama version.

Some years the palm fronds for the stable roof are obtained (occasionally in dark clothes and late at night) from an undisclosed location. Nowadays they usually get the fronds from members’ yards…at least that’s what they say?

The church’s hope is that the simple nature of the performance inspires awe and joy in the hearts of those in attendance. A homemade performance contrasting our fast-paced, tech dominated lives. 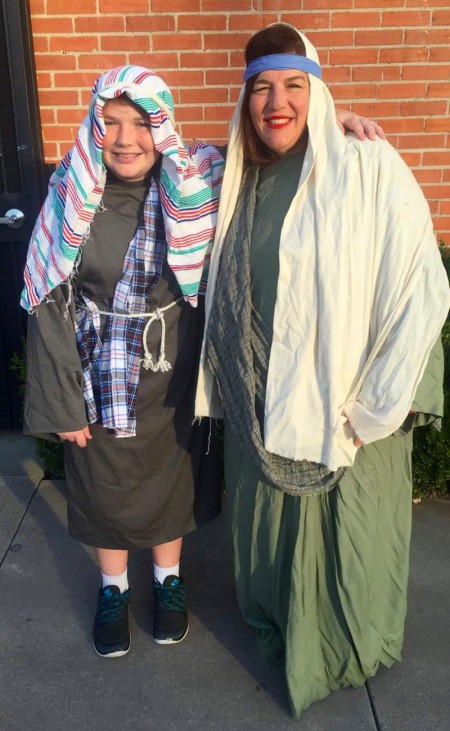 Of course, nothing’s as fast-paced as the mad dash to the back church parking lot where 700 cookies (that took 43 hours of baking by 32 people) will disappear in 6.4 minutes.

This year I plan to still be on that bale of hay but I might have a few tears in my eyes, as my son will be one of the wise men. They will most likely be tears of joy from reflecting on him evolving from a “lopsided haloed” kindergarten angel or perhaps the tears will be from the irony of him being a wise man but still flunking high school chemistry?

Happy holidays to all!