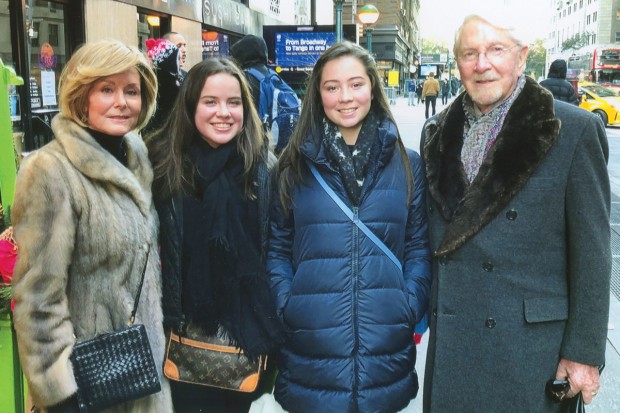 When their first grandchild, Thomas, was 6, Jack and Kelly McNeill began a family holiday tradition that has meant more than any gift they could have given: the gift of their time, spent traveling together to a place that was close to their hearts.

Jack, an orthopedic surgeon, and Kelly, an interior designer, moved from Beaumont to River Oaks in 2010 so they could be close by and watch their grandchildren grow up. They arrived none too soon, as it turned out.

“Now that they’re in high school they say, ‘Hi, Kitty, ’bye, Poppy,’ as they’re running by – they’ve got their own agenda,” said Kelly with a chuckle. “That’s why I treasure the trips we’ve had with them.”

The McNeill family tradition is a simple one. It consists of a first trip, when the child is 6 or 7, and a second one, when they are 16 or 17. There is just one rule: no parents allowed.

“Every trip we’ve had, it’s been great fun,” said Jack. “And it does improve the relationship when you don’t have the parents looking over their shoulder all the time, and they can just have a good time – and we spoil them.”

The tradition has given them the opportunity to enjoy one-on-one time and observe the changes in each of their grandchildren over time as they share a favorite city at a favorite time of year: New York City at Christmastime.

Kelly studied at Parsons School of Design in Manhattan back in the ’50s, and the couple has continued to go back to the city nearly every year to enjoy the extravagant way it decks the halls for the holidays. Now inviting their grandchildren into this tradition has made it extra special.

“Their eyes were just wide open looking at all the sights,” Jack recalled, laughing fondly at the memories of the children’s amazement at the stunning displays, many of which feature life-sized animated people, children, animals and fantastical creatures.

Every trip is different, but there are some constants. There’s the massive Christmas tree lighting up Rockefeller Center, and the spectacular window displays throughout Manhattan’s shopping district; carriage rides through Central Park; center-front seats at Broadway performances like The Lion King; museums, shopping, and the frozen hot chocolate and sundaes at Serendipity 3, the legendary restaurant and general store with a celebrity clientele and lines that stretch around the block.

What makes it especially fun, said Kelly, is seeing the change in the children over time. “They go from toy stores to Gucci and Tiffany’s in no time at all,” she laughed.

Thomas’ first trip, over a decade ago, came at a time when he was fascinated by magic. “He smiled the whole time,” recalled Jack. “He trooped around the city like a big boy – but he only wanted to look at magic tricks.” 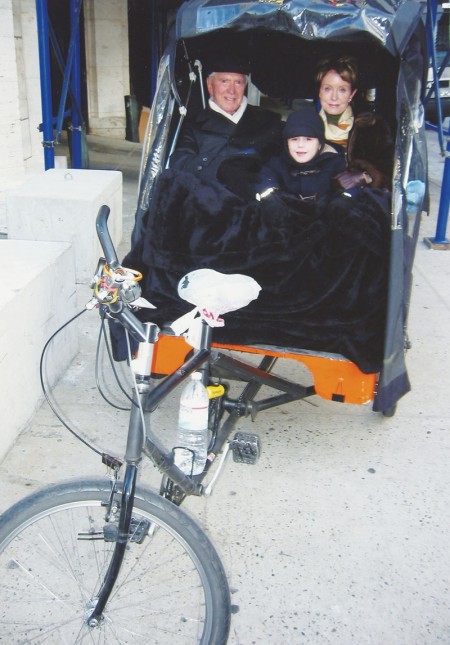 CITY ON THREE WHEELS Jack “Poppy” McNeill escorts wife Kelly “Kitty” and grandson Thomas, now 19, in a three-wheel bike taxi in the theater district after a matinee, then on to Lincoln Center for the circus.

They took him to the Toys ‘R’ Us in Times Square – the one with the huge Ferris wheel in the middle – and rode it with him. “He mastered card tricks at a very early age,” his grandfather recalled proudly.

A decade later, Thomas’ tastes had, predictably, changed – but his grandparents weren’t quite prepared for how much they’d changed. This time, he was more interested in the high-end men’s designer stores.

“He’s looking at shoes that are $6-700 a pair,” said Kelly. “Poppy says, ‘I know you can appreciate quality, but I’m not paying that kind of money for shoes for a teenager. Your daddy’s going to have to send you some money, kiddo.”

Thomas, now 19, laughed at the memory. Contacted in Mérida, Mexico, where he was staying with family as a part of his gap year before heading off to Africa for training as a safari tour guide, he recalled when his grandparents told him they were planning to take him to New York. “I was pretty stoked about the whole idea,” he said.

Both experiences left him with a better understanding of the world, he said. And though he’s traveled far and often with his parents – Ivette is a native of Veracruz, Mexico, and Brad is a manager at Pemex, the Mexican national oil company – there’s something different about traveling with Kitty and Poppy.

“When I travel with my grandparents, time goes so much slower,” he said. “It’s more of a timeless kind of interaction. I think you enjoy the time so much more because you know how precious it is.”

Looking back, he realizes how much time his grandparents must have put into planning the itinerary – each moment accounted for, with activities and spaces for leisure, taking advantage of every moment for maximum fun.

“They usually plan things six months ahead and have everything lined up, so when we get to the city everything is orchestrated in such a way that you have time between every event that you attend,” he said.

After Thomas’ first trip, it was the girls’ turn. Isabella, Jeff’s daughter, and Claire, Brad’s daughter, are around the same age, and even though Claire spends much of the school year in their second home in Telluride, they are together every chance they get – so they were delighted to share the trip.

The highlight of the girls’ first trip at age 6 and 7 was the American Girl doll store on Rockefeller Plaza.

“It seemed like six hours we spent in there,” marveled Jack. “They had a glorious time. They would not turn loose of the dolls – at the restaurant, at the theater, wherever they went.”

Their dolls were front and center no matter the transportation – the horse taxi, the tricycle taxi, the regular taxi.

Isabella is now 18, and Claire is 17. A couple of years ago, they traveled together with their grandparents again. It was a much different New York for them as teenagers. “It was no more American Dolls, I guarantee it,” said Kelly. “It was Tiffany’s and Victoria’s Secret.”

Their taste in food, however, was less exclusive. They were especially fascinated by the street food. A big draw, since they liked to sleep until noon and hit the ground running, was the Famous Amos hot dog stand in front of their hotel.

Next it was Bradcito’s turn – Brad, Jr.’s nickname, because of his half-Mexican heritage, is a diminutive form of Brad.

“His strong interest was the Museum of Natural History,” recalled Kelly. “He wanted to see the dinosaur bones.”

Brad is now 16, and normally it would have been time for another trip – but Jack had a hip replacement surgery, and so the trip was postponed for April.

“Bradcito’s very smart; he’s never made anything but an A,” bragged his grandmother. “He’s very intelligent and extremely kind and conscientious. He’ll probably be leading us around – I guarantee he’ll be researching everything he wants to do.”

Looking on down the road, little Jack, his grandpa’s namesake, is now 8 and awaiting his first trip; and a brand-new baby girl, Amelia, presents a big question mark.

“Jack will be 85 in December, and I’m 81, so there may come a time when our kids won’t let us take the kids traveling,” said Kelly.

But Jack reminded her of their 99-year-old friend who’s still traveling, and still going strong. So they’ll just keep going as long as they can.

Their advice to other grandparents: Don’t just say you’re going to do it. Make a plan, and actually follow through on it.

“The memories are priceless,” said Kelly. “You can’t go to Target and buy memories; you either have them or you don’t. They all giggle about it, and we have pictures and conversations. Things come up in conversation that spark a note – and no, they don’t forget anything. You can ask them a question, and they can tell you more than Jack and I have told you. We were busy keeping them from getting run over or falling off the curb or being snatched by somebody, and they were just enjoying the dazzling things around them.

“Memories are so important, and they have to be created; they don’t just fall out of the sky,” said Kelly. “You have to create the memory and whatever builds the relationship, and then years down the road, when they are our age, they will still remember what they did, who they were with, and what it was like – and I think that has great value.”