Nottingham St. Reindeer Returns to Light Up West U 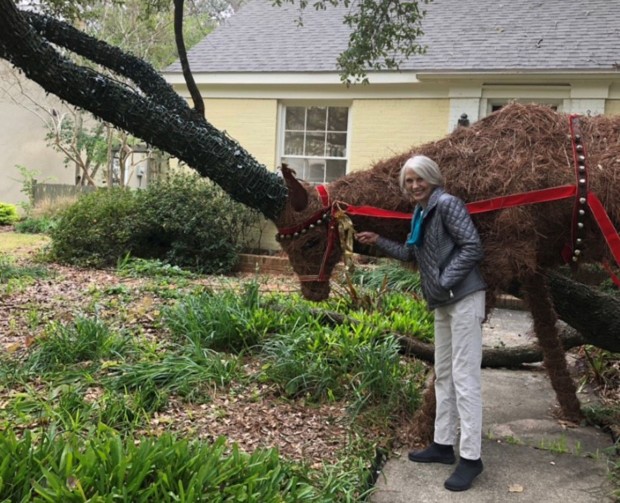 It was 1996 and West University resident Kathy Hall was on a mission.  Kathy, an artist, lived on Nottingham Street and, for the past couple of years, the two houses at the end of her block would alternate winning the Best Decorated Holiday House within West University.  Her across-the-street neighbor announced that he was on a mission to win this year. He hired a carpenter and got to work. Kathy saw all the action and decided to join in the fun.

Her first plan was to make a stunning display covering the sprawling oak tree limbs in their front yard that went all the way to the ground. She got five strands of white lights. That should do it, she thought. It ended up only covering a few limbs and blew a fuse in her older home. 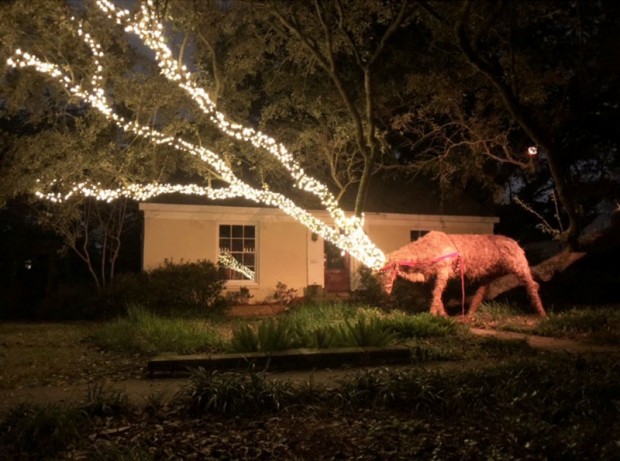 Kathy Hall says she makes the reindeer for the kids. She's surprised by how much joy it still brings to people. Growing up, she remembers loving a special Christmas decorated house on Kirby that had Santa and his reindeer coming down the tree limb. She's happy to be giving those same kinds of special Christmas memories to children.

The oak limbs glowing with the white Christmas lights reminded Kathy of giant antlers. It was just the inspiration she needed. The reindeer was born.

She gathered chicken wire and lumber to sculpt the body and decided to use pine needles for the fur. But where do you find enough pine needles for a 7 x 12-foot reindeer? Neighbors came to the rescue. Kathy posted flyers at JMH grocery store asking for donations of pine needle. Suddenly, bags of raked-up pine needles appeared in the basket she left on her driveway. Some of the tinier neighbors pulled their pine needles over in their little red wagons.

A few finishing touches included clear plastic ornaments halves and a few twinkle lights for the eyes, red ribbon for reins, jingle bells and, that first year, one of her husband, Herman Dobbs’, belts for a harness. Plus the glorious 20-foot outstretched white-lit oak tree antlers. 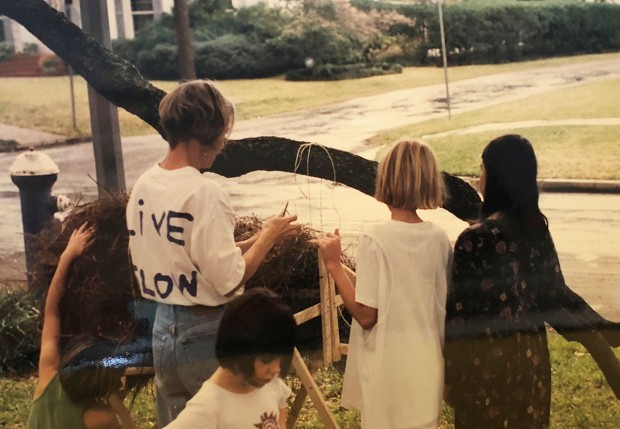 Kathy Hall is pictured here in 1996 showing neighborhood kids how to sculpt a reindeer. The first year she created the big reindeer, the kids made their own little reindeer.

Kathy and the neighbors had a great time with the reindeer tradition for a decade. One year, Kathy, a sculpture teacher at the Glassell School of Art, led the kids in the neighborhood in creating a smaller version of the reindeer next to the big one.

Neighbors often gathered outside Kathy and Herman’s home to visit and look in awe at the holiday masterpiece. Often people would park their cars to get a better look and hope to spot and possibly meet the talented artist.

For many, watching the reindeer creation in progress those first days after Thanksgiving signaled the beginning of the Christmas season. Kids coming home from college always looked forward to seeing the reindeer.

The majesty really can’t be captured in photos. It’s fascinating in both the daytime and nighttime, but it’s hard to beat the magnificence of the antlers brightly lit up at night. 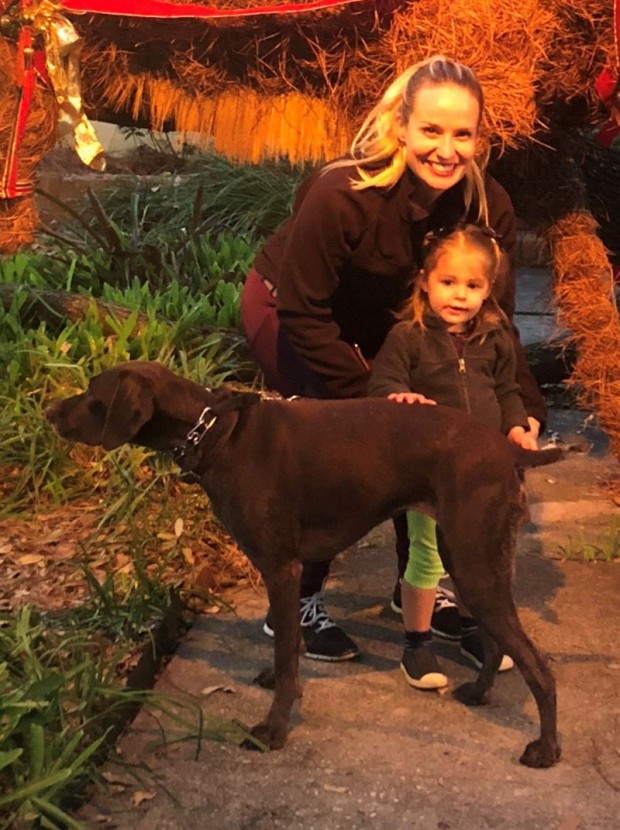 Tara MacLaren, her daughter, Margot, family dog, Darby, and infant son, Connor (not pictured as he was asleep in his stroller) stopped to admire the reindeer during their nightly walk. They were thrilled to meet Kathy and find out more about the reindeer.

Kathy has traditionally posted signs of thanks in the front yard listing that year’s reindeer crew of pine needle donors, assistant sculptors and supportive manual and encouraging labor. The kids were always excited when their names were listed.

The tradition lasted for 10 wonderful years but in 2006, Kathy decided to take a break. Life had just gotten a little too busy that year and Herman’s health was faltering. Over the next decade, Kathy did a lot of caregiving for her beloved husband. She shared, “I couldn’t have gotten through it without the love of neighbors and friends who would check in on Herman and I or just drop off a note, small gift or food to let us know they were thinking about us.”

Herman passed away this past spring. As Christmas approached this year, Kathy decided that creating the reindeer again would be the perfect way to honor Herman.  She said that looking out in the yard and seeing the reindeer and people enjoying it makes her smile. It brings back many wonderful memories and feels like Herman is celebrating with her. 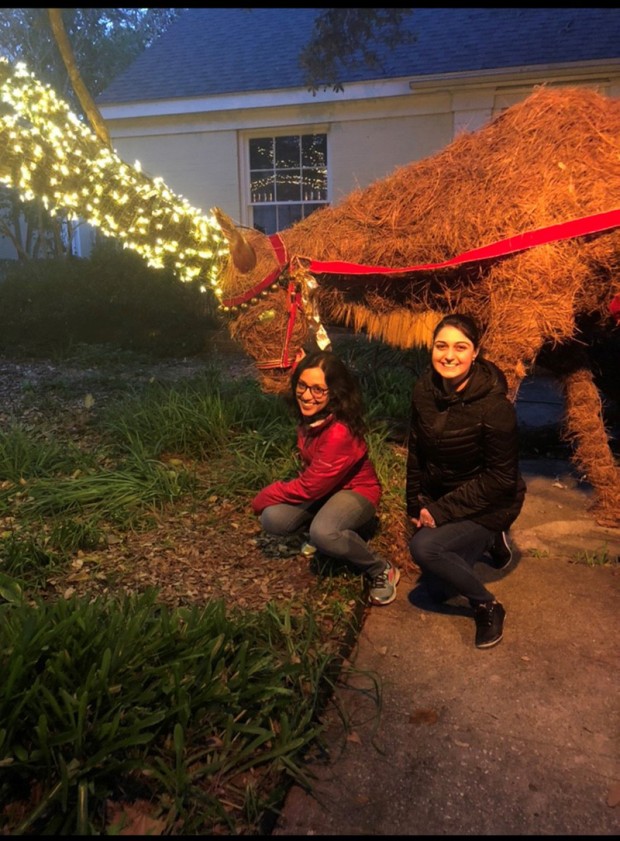 Akshita Mann and NIshtha (from left) are living in Houston while they are in dental school. They had driven by the reindeer during the day and came back to see it at night. They both said how magnificent it is.

The neighbors have been thrilled to see the Nottingham St. reindeer make a triumphant return after 12 years. There is a whole generation of neighbors who were never lucky enough to experience the reindeer.  Kathy beams, “I’m especially tickled by many of those kids from the ’90s, many of them my original helpers, being so excited to bring their own children to see the reindeer and share stories from when they were their age. “

Twenty-two year-old Sarah Gow, and 20-something older brothers Lawson, David, Christopher and younger brother Wesley, a senior at St. John’s School, are just some of the dozens of West U children who are reindeer fan alumni with many magical memories.

“When I was younger, seeing the beginning stages of the reindeer start to form was always so fun to watch and meant that Christmas was coming!” said Sarah, explaining that when relatives would come in town for Christmas, the family made sure to walk over so they could all enjoy the reindeer.

“Even though Kathy stopped making the reindeer for a while, it was something that I always reminisced about with my family and even my friends from college when we shared favorite Christmas traditions,” Sarah said. “I remember when we were younger and my brother Christopher and I would scoop up tiny fistfuls of pine needles from our yard and walk them to the ‘Pine Needle Lady’.  We wanted to help contribute in any way that we could.” (Even if it was fistful by fistful!)

Sarah was surprised and excited when she heard that Kathy was making the reindeer again this year, reminding her family of many childhood Christmases.

A few things are different about the 2018 reindeer’s journey. Some of the Hall’s original oak tree limbs have been trimmed so the reindeer’s antlers and body were shifted a bit. JMH Grocery is closed so social media came to the rescue with pine needles appearing from a Next Door Neighbor post. A lovely addition this year was from a neighbor that shared an owl feather he thought would be perfect for eyelashes. Another neighbor donated an authentic jingle bell horse harness. 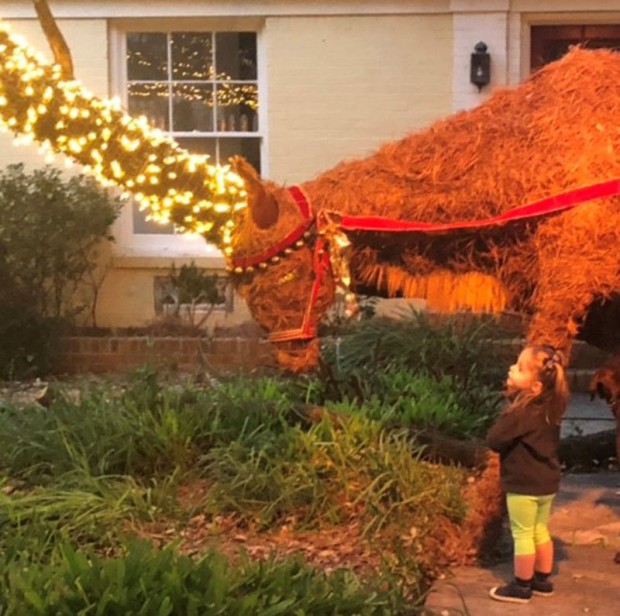 Margot MacLaren is mesmerized by the reindeer lights.

But the same glorious 20-feet of spectacularly lit antlers are still there. Even more beautiful and radiant is the talent and kindness of Kathy and Herman for sharing this wonderful gift with our community.

And if you look closely, this year’s reindeer has a little extra curve of a smile and an extra twinkle in its eye. Sure, it might be the angle of the pine needles or the placement of lights, but we think it’s Herman sending a special Christmas wink and a nod to his favorite artist.

The Nottingham reindeer can be found at 3521 Nottingham Street, the corner of Nottingham and Mercer St. The reindeer normally stays up until mid-January when it flies back to the North Pole.

Happy holidays to all. 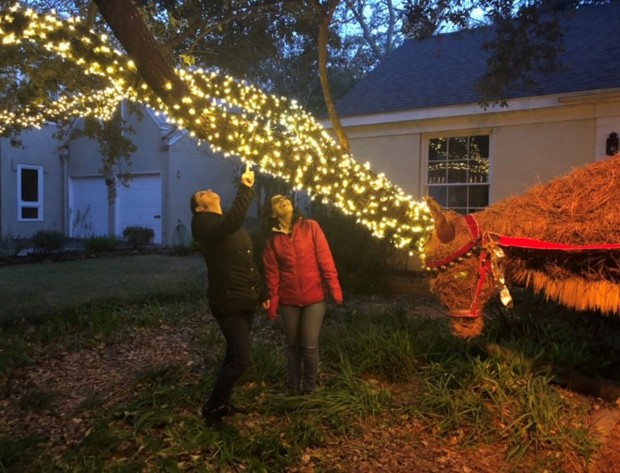 Akshita Mann and Nishtha (from left) are big fans of the reindeer and said they almost couldn't find the words to describe how lovely they thought it was. 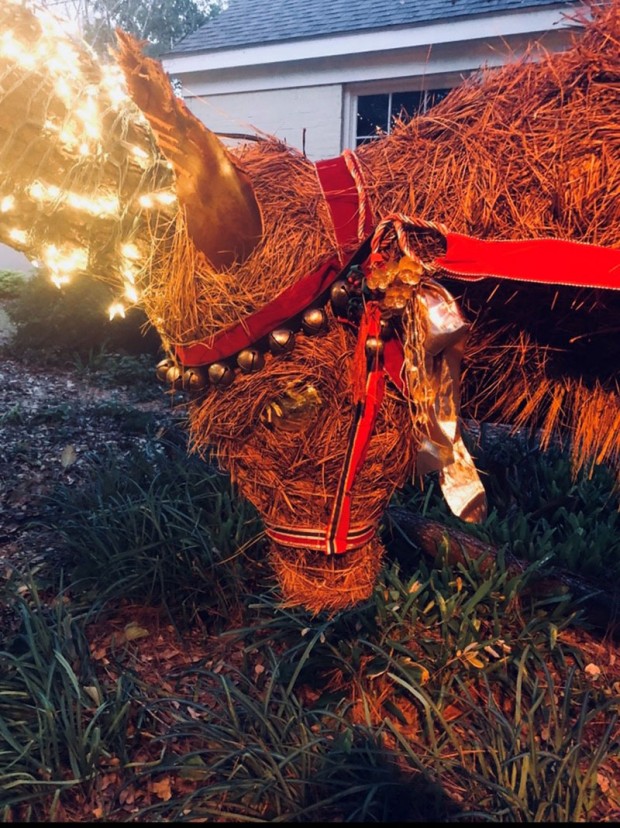 The reindeer says it's ready for its close up. Kathy loves the owl feather a neighbor donated this year for eyelashes. Look closely to spy the extra curve of a smile and twinkle in the eye of the 2018 reindeer.