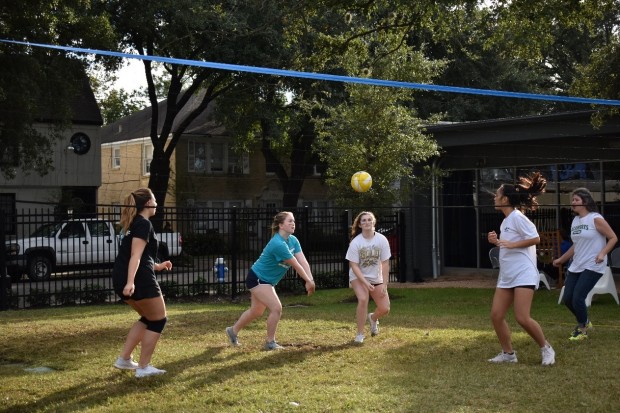 Sometimes, to escape the inevitable monotony of school and constant work, there needs to be something that keeps the school community alive and kicking. Enter the Post Oak School’s annual QuadFest, where food, fun, and friends come together in one glorious package in the central quad space of the school’s museum district campus, which presents itself as a combination of both middle school and high school.

QuadFest turned out to have one of the biggest turnouts for a voluntary school event ever, no doubt due not only to the taco and snow cone trucks present but also due to the volleyball tournament, which put student-created teams to the test to see who the champion at the sport really was. And to cap it all off, there was the obligatory pie-eating contest, with middle school student Niko Cantu, brother of high school student Andreas Cantu, reigning supreme.

But it wasn’t simply these three things alone that made it so special. QuadFest was also an opportunity to showcase student talent and creativity through Coffeehouse, where students (such as myself) would showcase their musical talents in a relaxed setting, as well as through performances by student bands such as Afterburn (comprising Post Oak students Henry Quillin, Wyatt Quillin, Luke Kirschner and Asher Forman) and Nighttime Colors (which includes Post Oak student Carly Gregg in its roster). These performances added a sense of individuality and artistic sensibility to the festivities and gave students the opportunity to showcase their talents and their voice when they otherwise may not have many opportunities to do so.

It can therefore be said without hesitation that this year’s QuadFest was a rousing success, filled with laughs, the beginning of new friendships (and, in the case of the volleyball tournament, possibly the end of some), the consumption of great food, and the appreciation of great music. Let’s all hope that next year’s event is as good or even better than this one, although that may be difficult, because the bar has already been raised so high.