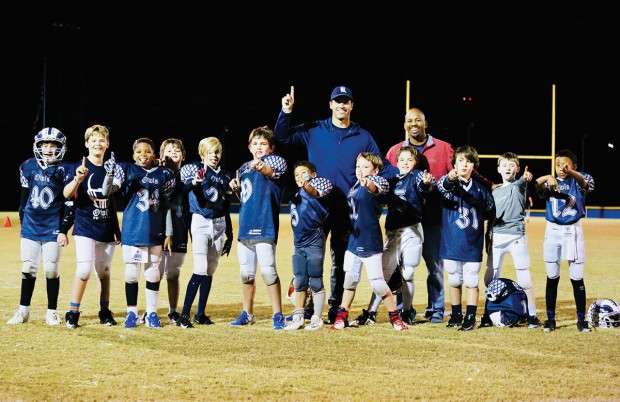 The Southwest Football League (SFL) sophomore Owls (pictured) won the division championship with a 28-0 victory over the Longhorns. Led by coaches Tucker Fowler and Sam Stewart, the third- and fourth-grade boys started the season with three consecutive losses before turning things around. During the championship game, the Owls secured a strong lead at the end of the first half when Jaden Chargois completed his first pass to Elijah Gassett, who ran for a first down. From that point, the Owls relied on flawless defense for the shutout. “Each player made a critical defensive play at some point in the game,” said Fowler. The champion Owls are (top row, from left) coaches Fowler and Stewart; (bottom row, from left) Morgan Banks, Jack Nodler, Jaden Chargois, Mason Mendelovitz, Elijah Gassett, Charlie Adams, Luke Stewart, Walker Evans, Reed Fowler, Lucas Wilson, Peter Henry and Brennan Slaton.