Books to Read Before the Final Season of 'Game of Thrones' 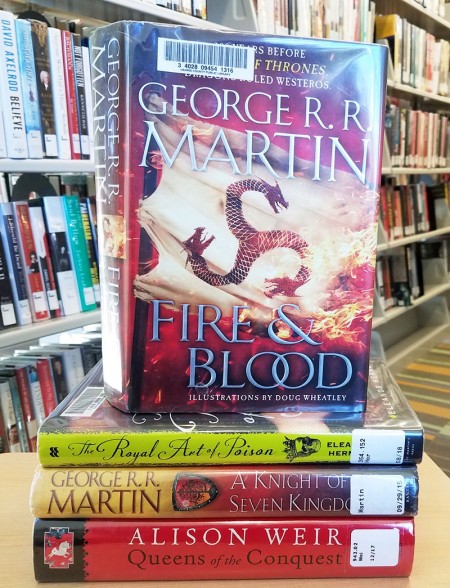 Anjela Martinez from Harris County Public Library suggests books that Game of Thrones fans will enjoy in anticipation of the final season of the popular show.

HBO has finally released the first glimpse for the final season of Game of Thrones. Needless to say that the minute and a half trailer led to long discussions in the workroom, each of us speculating which characters will meet their end and who will end up on the Iron Throne. As we await the premiere, here are a selection of books that will keep you busy until winter is here:

Want a Targaryen on the Iron Throne? Read George R.R. Martin’s Fire & Blood – the first part of a two-part history of House Targaryen. Learn how the Targaryens survived the Doom of Valyria, how Aegon and his sisters conquered Westeros and the Blackfyre Rebellion that nearly tore apart House Targaryren. Each narrative features hyper-realistic illustrations by artist Doug Wheatley. The book also includes the very muddled Targaryen family tree and lineage for readers to use as reference.

Rather than read about honorable knights or unlikely heroes like Brienne of Tarth and Podrick Payne, enjoy the tales of Dunk and Egg in George R.R. Martin’s A Knight of the Seven Kingdoms. Set nearly a century before the events of Game of Thrones, the three novellas follow hedge knight Duncan the Tall “Dunk” and his young mysterious squire Egg as they travel Westeros toward their great destinies. Readers will delight in the appearances of familiar names and events mentioned in Game of Thrones. This is my pick for audiobook listeners as these tales are read by Viserys Targaryen himself, actor Harry Lloyd.

If you’re looking for a bit of romance, I recommend the graphic novel Sleepless Vol 1. As the illegitimate daughter of the former king, Lady Poppy’s life has always been endangered. Cyrenic is the Sleepless Knight vowed to protect Lady Poppy day and night, but lately Cyrenic can feel himself drifting. As a new king reigns in the kingdom of Harbeny, Lady Poppy and Cyrenic must find out who wants her dead, endure the dangers of court and confront their feelings for each other. It’s a charming and fast-paced fantasy that will have you excited for the next volume.

Curious about the powerful queens in history that inspired George R.R. Martin? Check out Alison Weir’s Queens of Conquest: England’s Medieval Queens. Weir distinguishes fact from myth of five medieval queens: Matilda of Flanders, Matilda of Scotland, Adeliza of Louvain, Matilda of Boulogne and Empress Maud. No longer omitted from history, these women’s lives were a saga of love, treachery, war and politics that even Cersei Lannister would appreciate reading.

As much as it pains me to write this, could there have been a way to prevent Joffrey from being poisoned? Perhaps he could have prevented the poison by drinking from a goblet made from a unicorn horn. Though this sounds like a solution only found in Westeros, in reality, Queen Elizabeth I owned such a wine goblet. Unknown to Queen Elizabeth and other royals at the time the unicorn horns were in fact narwhal horns. In The Royal Art of Poison, author Eleanor Herman presents the extreme measures royals used to prevent poisoning and examines if the deaths of monarchs were indeed a result of a murder plot or their own devices. Underneath the jewels and extravagance, royals lived with unwashed bodies, contaminated water, poorly prepared food, deadly medical treatments and cosmetics that contained mercury, arsenic, lead and even urine. You’ll be fascinated with Herman’s findings, almost as much as you were when Olenna Tyrell gave her last words: “Tell Cersei. I want her to know it was me.”

As the April 17 premiere of Game of Thrones season 8 slowly approaches, find time to check out these books for the wait is dark and full of terrors.

All titles are available in eBook format on OverDrive.