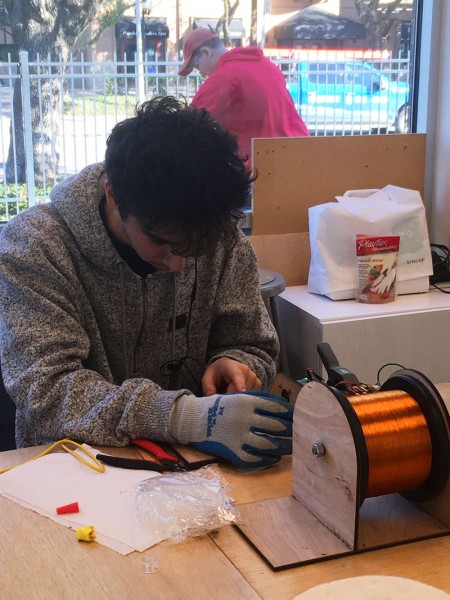 The Post Oak School has numerous traditions and aspects that separate it from the normal high school. Possibly the two most glaring differences are the J-Term and A-Term, two sessions of the spring semester which involve specialty courses that deviate from the typical reading, writing and arithmetic. Between J-Term in January and A-Term in March (originally April, hence the name), there exists only 27 school days, making the period arguably the most exciting of the school year.

For J-Term 2019, there were numerous courses to choose from comprising various disciplines ranging from cooking to financial planning. I ultimately chose to engage in the course option that sounded the most eccentric but also possibly the most engaging: “Kinetic Sculptures/2.5 Dimensional Displays.” Mike Beradino, a local artist with a knack for combining technology with art as well as a longtime teaching contributor for J- and A-Terms and the school’s computer science course teaches this course, so I knew that there would be something great in store for me there.

As it turns out, I was right. The three-week course revolved around completion of a singular project: two wooden sculptures that utilize electric circuits and electromagnetic fields to display programmed animations, as well as games utilizing player input devices. One of these devices displays these images using magnetic coils wound with copper wire that cause raised bumps in a magnetic liquid known as ferrofluid; the other uses wooden flaps with magnets on the back that respond to the copper wire.

Although it sounds intimidating, little knowledge of computer science or electrical engineering was needed to actually succeed in the course; beyond the basics, most of the key concepts were taught to us then and there. The rest of the J-Term involved us tinkering with electrical circuits, designing and cutting the boxes and panels, and winding (lots of) magnetic coils.

In retrospect, the term allowed me to grow and see results in my own learning. Although I was interested in programming games and animations and learning computer concepts before the term began, it allowed me to gain greater appreciation for physical craftsmanship as well as aesthetic design. As someone who wants to make an impact in the STEM world, I do not doubt that this experience will serve me well.